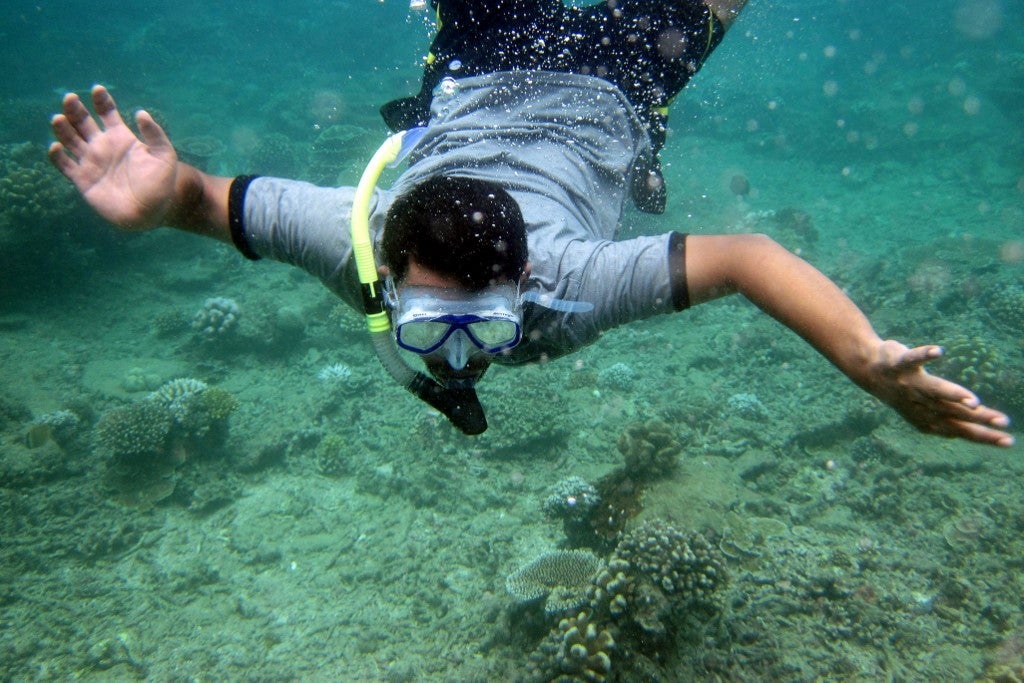 An environmental activist from the Lamjabat Foundation examines coral for bleaching during in a reef survey in the area of Ujong Pancu, Aceh Besar on July 31, 2010. Coral bleaching , which can eventually kill corals, has been reported throughout South East Asia, the Indian Ocean and the Pacific. This phenomenon occurs when stresses such as rising sea temperatures disrupt the delicate, symbiotic relationship between the corals and their host organisms. AFP FILE

SYDNEY, Australia — The world’s southernmost coral reef has been hit by bleaching this summer, Australian scientists said Wednesday, as they warned rising sea temperatures from climate change were affecting even the most isolated ecosystems.

The corals off Lord Howe Island — some 600 kilometers (370 miles) offshore from Sydney — were affected by elevated temperatures this summer, despite escaping severe bleaching that damaged the Great Barrier Reef in 2016 and 2017.

“It’s a canary in the coal mine that we are seeing bleaching at this very isolated southernmost reef, which is worrying,” Associate Professor Bill Leggat of the University of Newcastle told AFP.

“It’s just another indicator that climate change is affecting everywhere around the world. Here is a reef that is 600 kilometers from the mainland and we are seeing bleaching there in a lovely, beautiful ecosystem.”

Leggat and other scientists from several Australian universities and the US National Oceanic and Atmospheric Administration found severe bleaching of up to 90 percent at Lord Howe’s inshore, shallow lagoon reefs.

Deeper-water corals in the marine park, which contains species not found anywhere else and like the Barrier Reef is a World Heritage site, were still “looking quite healthy” having mostly escaped the bleaching, Leggat said.

Leggat said increasing baseline temperatures caused by climate change, and local factors such as elevated temperatures in the area this summer, caused the bleaching to occur.

The scientists are set to return to Lord Howe in the next few months to find out if some corals have been so severely bleached they can’t recover.

Corals can recover if the water temperature drops and the algae are able to recolonize them.

However, swathes of coral at the Barrier Reef — the world’s largest living structure — died or were damaged in the unprecedented successive events in 2016 and 2017.

Coral reefs make up less than one percent of Earth’s marine environment, but are home to an estimated 25 percent of ocean life, acting as nurseries for many species of fish. /cbb