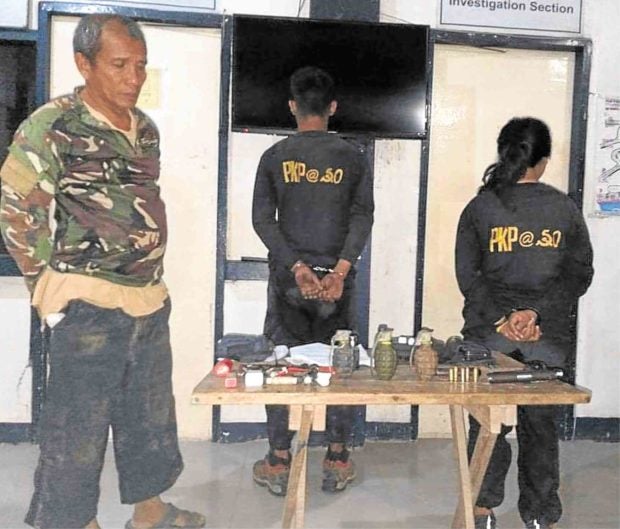 BACOLOD CITY — A high-ranking leader of the New People’s Army (NPA) in Negros Occidental province and his two companions were arrested on Monday night by a team of policemen and soldiers in Kabankalan City.

Villanueva is also known by his aliases “Tikboy” and “Gamay.” Arrested with him were Rona Magbanua, alias “Cheche,” 18, of Hinobaan town, and Jomar Vilarojo, alias “Tiny,” 28, of Kabankalan.

Seized from the group were a .45-caliber pistol and three fragmentation grenades.

Their arrest came six days after former Catholic priest Frank Fernandez, Kometing Rehiyonal-Negros head and National Democratic Front of the Philippines consultant, was arrested with his wife and another companion in Laguna province.

Arevalo said they received a tip about the presence of armed men at Sitio Amian Ilawod in Barangay Tampalon, Kabankalan. When government troops went to the village, they saw the three wearing shirts marked “PKP @50,” which were used by rebels to mark the NPA’s 50th founding anniversary.

Arevalo said Villanueva and his companions did not resist arrest.

A 20-minute clash, however, ensued early on Tuesday in the area when soldiers and policemen encountered a group of NPA rebels who were believed to be companions of Villanueva.

Recovered from the clash site were an M16 rifle, bullets, cellular phones, electronic gadgets, a transistor radio, a pair of binoculars, medical kit and antigovernment documents.

Police said another group of NPA rebels on Tuesday burned four tractors, a truck, a sugarcane loader and bunk houses of farm workers at Hacienda Nieva in Barangay Tooy, Himamaylan City, about 28 kilometers north of Kabankalan.

The hacienda’s lone security guard escaped and reported the incident to the police.

The suspects, who identified themselves as NPA rebels, fired their guns as they left, Provido said.

On Monday, more than 1,700 people evacuated after a clash between government soldiers and rebels broke out at Barangay Quintin Remo in Moises Padilla town.

A soldier was hurt while three improvised bombs were recovered after the exchange of gunfire between soldiers and about 20 NPA rebels believed to be among those who shot and killed reelectionist Moises Padilla Councilor Jolomar Hilario in neighboring Barangay Inolingan on Sunday.

Graduation ceremonies in some schools in the remote village of Quintin Remo were disrupted by the skirmishes.

In Mountain Province, all farming and tourism activities had been suspended in Bauko town on Monday due to pursuit operations conducted by the police against communist rebels who killed a policeman and wounded another during a March 29 clash at Mt. Kapuwaw.

Arsenia Addon, Bauko tourism officer, advised residents to “confine their activities to barangay centers or populated areas,” and to steer clear of the rugged mountains straddling Bauko and Tadian town in Mountain Province, and parts of Buguias town in Benguet province.

On Sunday, residents reported hearing gunfire and explosions in the borders of Bauko and Tadian.

Members of the NPA Leonardo Pacsi Command fled toward this area after engaging the Cordillera police’s Regional Mobile Force Battalion in a 15-minute firefight in Bagnen village.