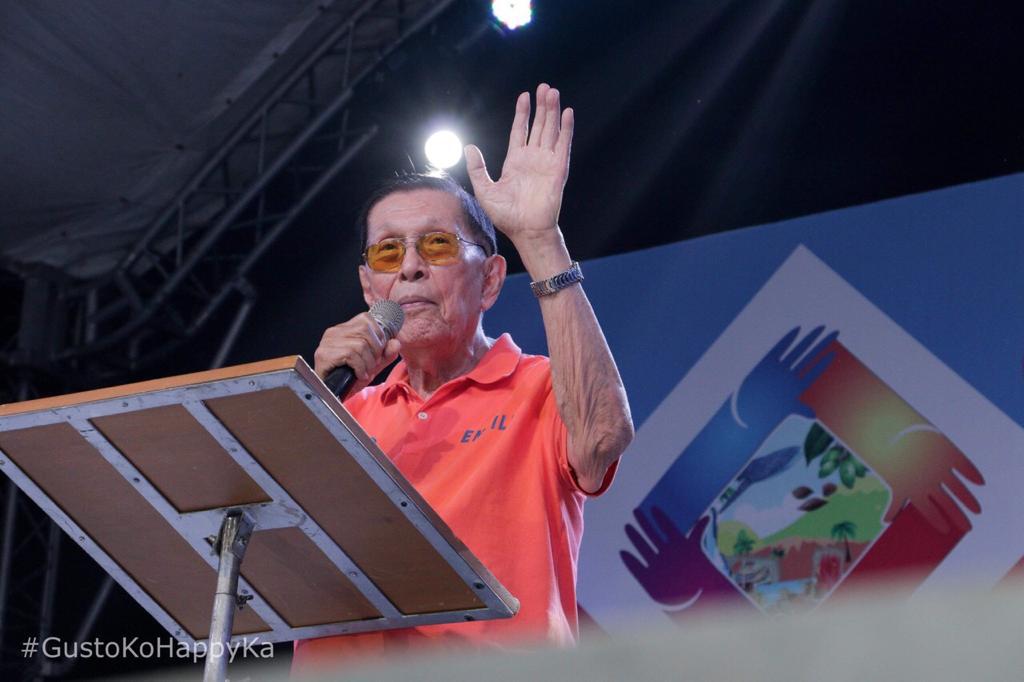 Puwersa ng Masang Pilipino (PMP) Senatorial candidate Juan Ponce Enrile on Sunday underscored the need to put up more irrigation facilities for the agricultural sector as a measure to mitigate the ill effects of El Niño.

During his campaign in Sorsogon, Enrile said that he saw the “devastating effects of El Niño to farmlands” and vowed to put up more irrigation facilities if elected into office.

“Since I started going around the country for my sorties, one thing I noticed is that provinces from Luzon to Mindanao are being hit hard by drought. That’s why I’ve made it a point to talk to farmers and growers in my stopovers,” the 95-year old candidate, whose stamina during his nationwide campaign has rivalled even those of younger peers, shared in an interview.

“Here in Sorsogon and in all the other places, they are asking for better irrigation facilities, more equipment, more infrastructure. Hindi lang ‘yan para masolusyonan yung El Niño ngayon. We need to mitigate the effects of this in the long haul,” the veteran lawmaker urged.

Sorsogon thrives on agriculture, with coconut, rice, corn, abaca, and pili nuts as the major products.

It is also rich in marine resources such as fish, crabs, clams, mollusks and seaweeds.

The province is among those severely affected by El Niño which has already resulted in losses to crops, livestock and fisheries in the amount of P2.4-billion pesos in the national scale.

In the Bicol region, P58 million in losses have been tallied due to the phenomenon.

Enrile said that there has to be a way for the agriculture sector to meet the challenges brought about not just by the dry spell but by the impact of natural disasters and climate change.

“Majority of Filipinos are still very much dependent on agriculture for employment and their day-to-day income. It is sad that many farming-dependent families continue to be the poorest in our country. Ngayon pa ba natin sila papabayaan kung kailan nangangailangan sila?” Enrile quipped.

If elected, the four-term Senator vowed to boost the income of farmers and agricultural workers by improving agricultural infrastructure, promoting research and development in the sector, and giving access to credit for small-time farmers.

Supporters of Enrile welcomed him in a motorcade around Sorsogon City and during an afternoon rally at the Our Lady of Penafrancia Monastery.