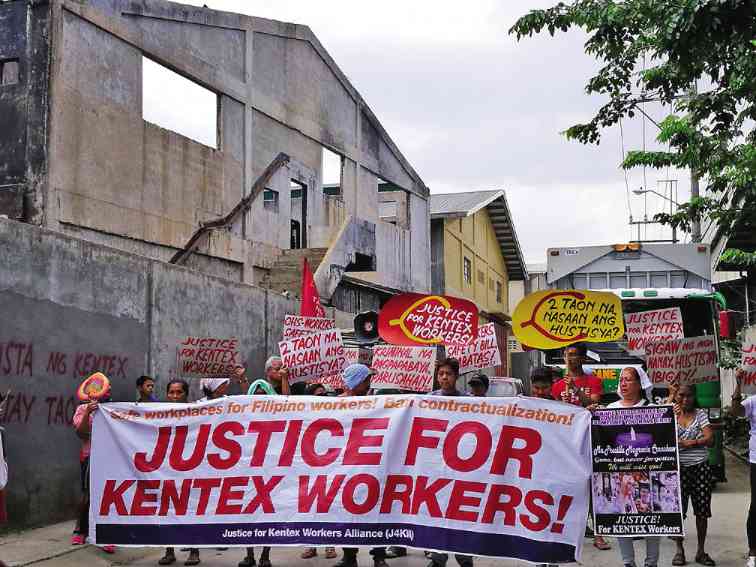 Families of Kentex fire victims in 2015 and survivors demonstrate outside the ruins of the ill-fated slipper factory in Valenzuela City to call on President Rodrigo Duterte to help them get justice. CONTRIBUTED PHOTO

MANILA, Philippines — The Sandiganbayan has denied the request of a fire officer to dismiss evidence presented against him in connection with the deadly Kentex factory fire in Valenzuela City in 2015.

The Second Division ruled on March 28 that Senior Fire Officer Rolando Avendan failed to show that the evidence presented by the prosecution was insufficient to establish the case against him.

“After a careful review of the records of the case and the evidence of the prosecution, the Court denies the motion of accused Avendan.  Accused Avendan failed to show that the prosecution’s evidence was insufficient to establish a prima facie case against him,” the resolution penned by Associate Justice Michael Frederick Musngi said.

The court noted that the prosecution presented three witnesses, aside from documentary evidence enough to pin the charges against him.

The Bureau of Fire Prevention (BFP) officer is among seven people charged with reckless imprudence resulting in multiple homicide and multiple injuries for allowing the factory to operate even without the required safety features.

In 2015, 74 persons were killed in a fire which engulfed the Kentex slipper factory in Barangay Ugong, Valenzuela City.  Investigation showed that the fire started from molten slags of a welding rod.

Avendan claimed that he was only assigned to do a fire safety inspection of the factory in July 2014 and October 2014, saying that he did not recommend the issuance of  an FSIC that year.

However, the prosecution noted that Avendan was negligent in his job, as his report in 2014 did not show the true status of the Kentex factory.

“Accused Avendan purportedly made an After Inspection Report dated 07 July 2014 which does not reflect the true and actual conditions of the Kentex premises and failed to indicate the following violations of Kentex,” the court said.

However, the Sandiganbayan noted that Avendan’s arguments could be discussed in the presentation of defense evidence in the trial proper.

“The grounds thus raised by the accused in his Motion are best appreciated in the course of trial on the presentation of defense evidence,” they added. /cbb