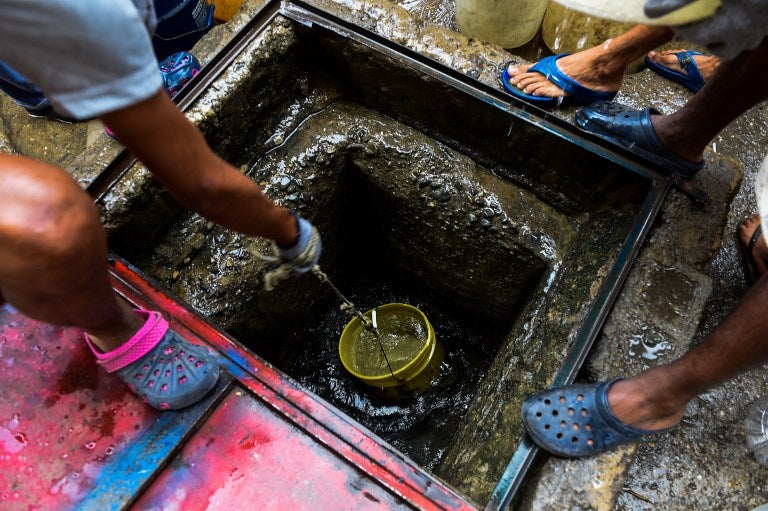 People draw water from a spring water tank to be used in their toilets, at Petare neighborhood in Caracas on April 1, 2019. AFP

CARACAS, Venezuela – Millions of Venezuelans were left without running water Monday amid a series of massive blackouts, forcing President Nicolas Maduro to announce electricity rationing and school closures as the government struggles to cope with a deepening economic crisis.

Maduro announced 30 days of power rationing on Sunday, after his government said it was shortening the work day and keeping schools closed due to blackouts.

The measures are a stark admission by the government — which blamed repeated power outages in March on sabotage — that there is not enough electricity to go around, and that the power crisis is here to stay.

Angry Venezuelans meanwhile took to the streets of Caracas to protest the power cuts and water shortages.

“We have small children and we aren’t able to give them a drop of water to drink,” said Caracas resident Maria Rodriguez.

With no electricity, pumping stations can’t work, so water service is limited.

But people try to find water wherever they can: from springs, leaky pipes, gutters, government-provided tankers, and the little that flows through the Guiare River in Caracas.

“We fill up from a well near here but we don’t know if it’s drinkable. But we’re using it,” said Erimar Vale, who lives in the capital.

Angel Velazquez said he bathed at work because he did not have water at home.

The blackouts have worsened already dire economic and living conditions in the country, which sits on the world’s largest proven oil reserves.

The power failures have accompanied a political showdown between Maduro and opposition leader Juan Guaido, who is recognized as interim president by the United States and more than 50 other countries.

Speaking on state television, Maduro said he had approved “a 30-day plan” to ration power.

He did not detail how it would work but said there would be “an emphasis on guaranteeing water service.”

Maduro also acknowledged that many Venezuelans could not watch his broadcast because they had no electricity.

Crippled infrastructure, little investment in the power grid and poor maintenance have all contributed to the country’s electricity woes.

A “brain drain” of qualified personnel has also hit the industry, with about 25,000 people in the electricity sector among the 2.7 million Venezuelans who have emigrated since 2015.

The blackouts are only exacerbating the country’s deep economic crisis, which features a soaring inflation rate.

Also on Sunday, authorities announced other measures as a result of the electricity shortage.

“To achieve consistency in the provision of electricity, the Bolivarian government decided to maintain the suspension of school activities and establish a workday until 2:00 pm in public and private institutions,” Communications Minister Jorge Rodriguez said on state television.

Guaido has asked his supporters to protest each time there is a blackout.

“This is going to continue. The situation is very serious, there will be more blackouts and rationing,” said Winton Cabas, president of the Venezuelan Association of Electrical and Mechanical Engineering.

“The whole power grid is barely generating between 5,500 and 6,000 megawatts, when it has the capacity to generate 34,000 megawatts,” Cabas told AFP.

The Maduro government has blamed “terrorists” for alleged attacks that have damaged the Guri hydroelectric power plant, which generates 80 percent of Venezuela’s electricity.

The Guri plant, however, was already showing signs of trouble: back in 2010, then-president Hugo Chavez said electricity would be rationed in some Venezuelan states because water was low at the Guri dam due to a drought.

Jose Aguilar, a Venezuelan consultant living in the United States, said the problems with the power grid run deep.

“Over the past 20 years, the infrastructure has been abused due to a lack of maintenance and the postponing of upgrade plans,” he told AFP.

Another problem was the “de-professionalization” of the sector when Chavez nationalized the power company in 2007 — a move that led to pro-government loyalists taking positions as managers and engineers.

Demonstrations by Venezuelans angry about the blackouts broke out Sunday in Caracas.

With cooking pots, whistles and flags, dozens of residents spontaneously took to the streets in scattered protests.

Protesters and human rights groups said some demonstrators were attacked by “colectivos” — pro-government enforcers that the opposition describes as paramilitary thugs.

Maduro has given the “colectivos” permission to contain protests that he describes as violent mobs aiming to oust him from power.

Joaquin Rodriguez, a 54-year-old lawyer, was among those protesting in Los Palos Grandes, a once-prosperous neighborhood that has endured blackouts for more than a decade.

“Once again a nationwide blackout is affecting our quality of life,” he told AFP.