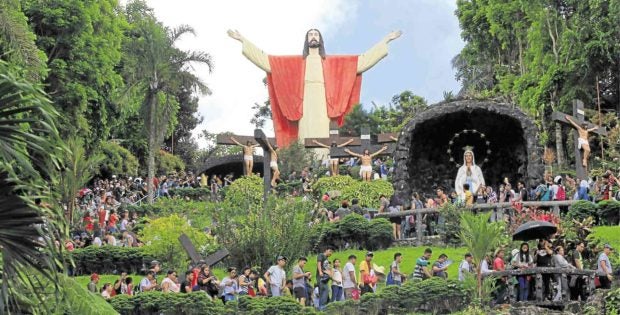 PILGRIM SPOT Kamay ni Hesus shrine in Lucban, Quezon province, featuring an iconic image of the Risen Christ, draws pilgrims throughout the year. The 5-hectare complex, however, receives the bulk of its visitors during the Lenten season. —DELFIN T. MALLARI JR.

LUCBAN, QUEZON—Security personnel have been ordered to escort out of the Kamay ni Hesus (KNH) shrine here candidates or their supporters who will conduct any form of political campaign activity as the country prepares for the May 13 elections.

“The shrine is a place for prayer and spiritual cleansing. Respect the shrine and devotees. Conduct your political campaign elsewhere,” Fr. Joey Faller, KNH administrator, said in an interview on Sunday.

Faller appealed to local and national candidates and their supporters to give pilgrims at KNH the space they needed for prayers and reflection during the Lenten season.

The 5-hectare complex at Barangay Tinamnan is one of the favorite destinations of Lenten pilgrims, many of them from areas outside Quezon.

Inside the shrine is the 300-step Stairway to Heaven that features a 15.24-meter (50-feet) statue of the Risen Christ on top of a hill.

Faller, known as the “healing priest,” also warned politicians against putting up campaign posters and streamers outside the complex.

The priest, however, said he was ready to meet all candidates who wanted to join him in prayers for the holding of a peaceful, honest and orderly election.

“They can see me anytime. And together we will pray and call on God’s help to bless our country and the Filipino people,” he said.

Faller urged candidates to discuss issues affecting communities and offer solutions to problems. “No more empty promises, character assassination and guns, goons and gold. The people have had enough of these for so long and look where we are now,” he said.

“To all voters, choose wisely. Use your sacred vote as a potent weapon to improve your lives and change what is wrong around us,” he said.

Ledesma said voters must use the criteria set by the Catholic Bishops’ Conference of the Philippines (CBCP) in electing public officials.

The CBCP called on the people to form “circles of discernment,” where the faithful could openly discuss with other community members election-related issues and options in choosing their leaders.

“Group discernment should be more enriching and enlightening instead of relying on one’s solitary perceptions,” Ledesma said. “The entire community is a stakeholder in the choice of its leaders.”

“Candidates should be elected not on the basis of personal favors given to the voter, but on their record of public service and commitment to work for the common good,” Ledesma said. —Reports from Delfin T. Mallari Jr. and Jigger J. Jerusalem