Kids’ books yield P30M worth of cocaine at Naia 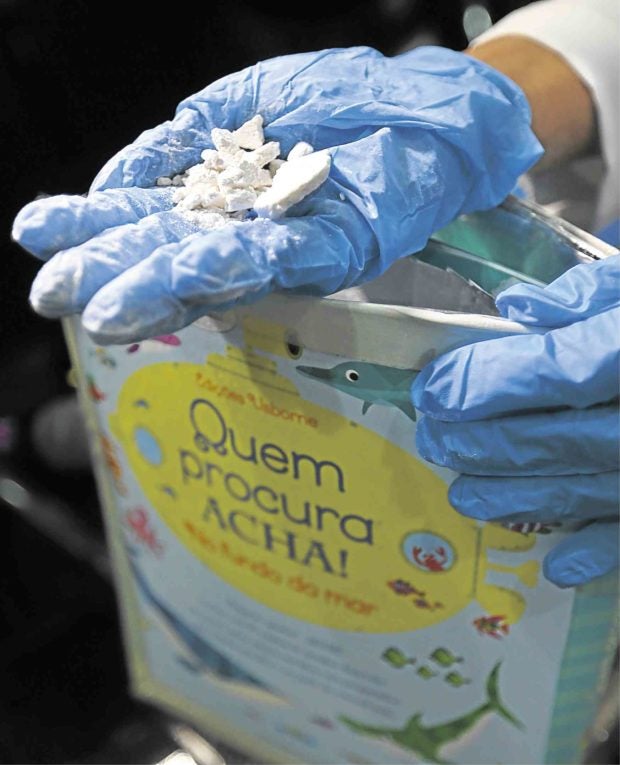 NOT CHILD-FRIENDLY A chemist of the National Bureau of Investigation shows the cocaine found inside one of the imported children’s books. —EDWIN BACASMAS

MANILA, Philippines — A woman carrying five children’s books in which 3.3 kilos of cocaine worth P30 million were concealed has been arrested at the Ninoy Aquino International Airport (Naia) Terminal 3.

Ma. Clara Bedico, 28, was about to leave for Thailand to deliver the drugs when agents of the National Bureau of Investigation (NBI) took her into custody, along with Alvin Avila who had booked her flight, on March 28.

A follow-up operation the next day led to the arrest in Pasig City of Antonette Mendiola, Bedico’s alleged recruiter.

The suspects would be charged with possession and transportation of dangerous drugs.

NBI deputy director Vicente de Guzman III told reporters on Monday that Bedico was on her way to Thailand to deliver the contraband. From there, she would travel to Brazil to pick up more cocaine.

The new batch of drugs would then be brought back to Manila for repacking and delivered again to Thailand by Bedico, De Guzman added.

The cocaine seized from Bedico was found in five imported children’s books. A cardboard paper had been taped to the back of each book’s hardbound cover, creating a pocket where the drugs were hidden. The books were then wrapped individually in plastic.

NBI deputy spokesperson Auralyn Pascual said they conducted the operation based on a tip.

When members of the NBI’s Special Action Unit (SAU) went to the airport, they found the suspect and Avila in a restaurant waiting for Bedico’s flight.

A search of the suspect’s luggage yielded the five books. Tests later confirmed the substance inside the books was cocaine.

The incident prompted NBI-SAU chief Emeterio Dongallo Jr. to issue this warning to those leaving for abroad, particularly overseas Filipino workers (OFWs): “Beware of this enticement.”

He urged travelers to beware of people who would ask them to transport books, toys or diamonds as these might contain contraband, including drugs.

Dongallo said that female OFWs were the preferred couriers of drug rings. Bedico, however, posed as a tourist.

The NBI said it was still trying to determine how the drugs carried by Bedico passed through airport security personnel although Dongallo noted that cocaine was “undetectable” by X-ray machines.

Read Next
Beware of greedy politicians
EDITORS' PICK
Rise to perfection: Spot on tiles for your stair risers
2021 PH GDP grew by 5.6 percent, slightly above target
Pacquiao says he is knowledgable to run for president
Senate panel seeks raps vs 27 in ‘pastillas scam’
Upgrade the way you clean with ROIDMI’s vacuum cleaners
Step up your vlog game with vivo’s newest smartphone
MOST READ
‘I can’t take that sitting down!’ Sotto defends Lacson after Robredo comment
13 Scout Rangers guarding VP Robredo hurt in vehicular accident in Basilan
Paolo Bediones to face court battle versus disgruntled staff and crew
Robredo slams Bongbong, rivals in Boy Abunda’s interview
Don't miss out on the latest news and information.