MANILA, Philippines  – Forty-five New People’s Army (NPA) rebels surrendered to authorities in the Calabarzon (Cavite-Laguna-Batangas-Rizal -Quezon) region over the weekend and turned over 25 high-powered firearms and explosives to the regional police and the Philippine Army.

Thirty-three rebels under the Komiteng Larangan Girilya-Cesar that operates in Laguna, Rizal, and Quezon surrendered on March 29.

Ten more, some from General Nakar, Quezon, turned themselves in on Saturday, while another two yielded on Sunday.

WATCH: A former NPA rebel shares her experience on how she was recruited to the communist movement to how she was convinced to surrender to authorities in Calabarzon. @inquirerdotnet pic.twitter.com/hDziTHw3bm

“These rebel surrenderees are now free to rebuild their lives and enjoy peace and prosperity with their families and take the opportunity to avail of the government’s amnesty program and livelihood assistance under the  E-CLIP,” Philippine National Police (PNP) chief General Oscar Albayalde said in a press briefing at Camp Crame on Monday. 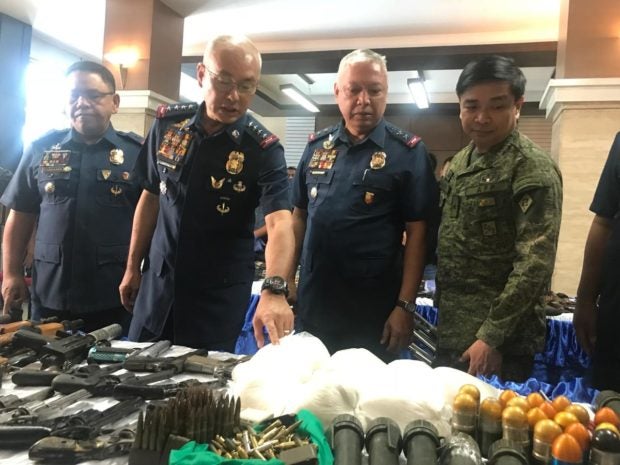 Officials of the Philippine National Police and the Philippine Army inspect the high-powered firearms and explosives surrendered by former NPA rebels in the Calabarzon region. Photo by Cathrine Gonzales / INQUIRER.net

The program features the establishment of halfway houses or receiving facilities where the former rebels can stay during the facilitation of their surrender, said Albayalde.

Carranza said the former rebels served as escorts, guides, and runners and provided safehouses to the guerilla forces.

“Most of them were part-time guerilla fighters and part-time farmers,” he added.

Albayalde said the PNP continues to extend the government’s gesture of reconciliation through peace negotiations with local units of the Communist Party of the Philippines, pursuant to  Executive Order No. 70 that institutionalized a “whole-of-nation approach” in attaining an “inclusive and sustainable peace.” /gsg