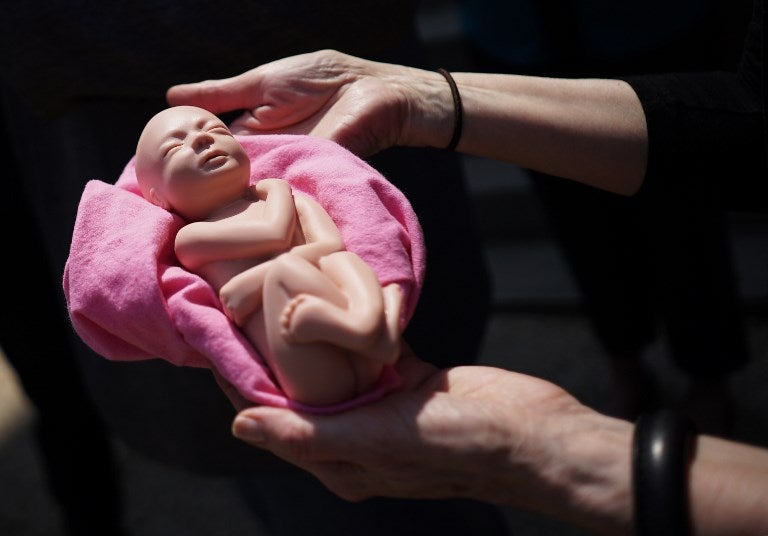 An anti-abortion activist holds a model of a fetus during a protest outside of the Longworth House Office Building on Capitol Hill in Washington, DC on May 7, 2015. AFP

MIAMI, United States – The governor of the southern US state of Georgia was expected to sign a bill banning abortion as soon as a heartbeat is detected, after legislators on Friday approved the text which Hollywood celebrities vowed to fight.

Abortion is one of the most politically divisive issues in the United States and numerous states have tried to limit access to abortions.

Georgia’s lower house approved the “heartbeat bill” which prohibits abortions as soon as the first beats of the fetus are heard — from six weeks — something that happens when most mothers still don’t know they are pregnant.

“Georgia values life. We stand up for the innocent and speak for those who cannot speak for themselves,” Governor Brian Kemp, a Republican, wrote in a statement congratulating legislators.

“If Gov. Kemp signs this abortion ban bill into law, the ACLU has one message: we will see you in court,” said Andrea Young, ACLU’s executive director for Georgia.

Thirteen US states have studied or approved versions of the “heartbeat bill” this year.

Although judges in Kentucky and Iowa blocked such laws, the aim of those who promote the legislation is to reach the Supreme Court and reverse the right to abortion at the national level, according to Planned Parenthood, the largest organization supporting abortion rights.

The US Supreme Court legalized abortion nationwide in 1973 with its decision in Roe v. Wade.

Since taking office in 2017, President Donald Trump has named two justices to the Supreme Court who oppose abortion, leading activists who support abortion rights to fear that Roe v. Wade could be overturned.

Georgia is an important destination for film and television production, but dozens of Hollywood celebrities threatened to take their business elsewhere if the law takes effect.

“We will do everything in our power to move our industry to a safer state for women” if the bill is approved, said a letter to lawmakers signed by Alyssa Milano, Alec Baldwin, Amy Schumer, Ben Stiller, Sarah Silverman, Mia Farrow and others. /cbb