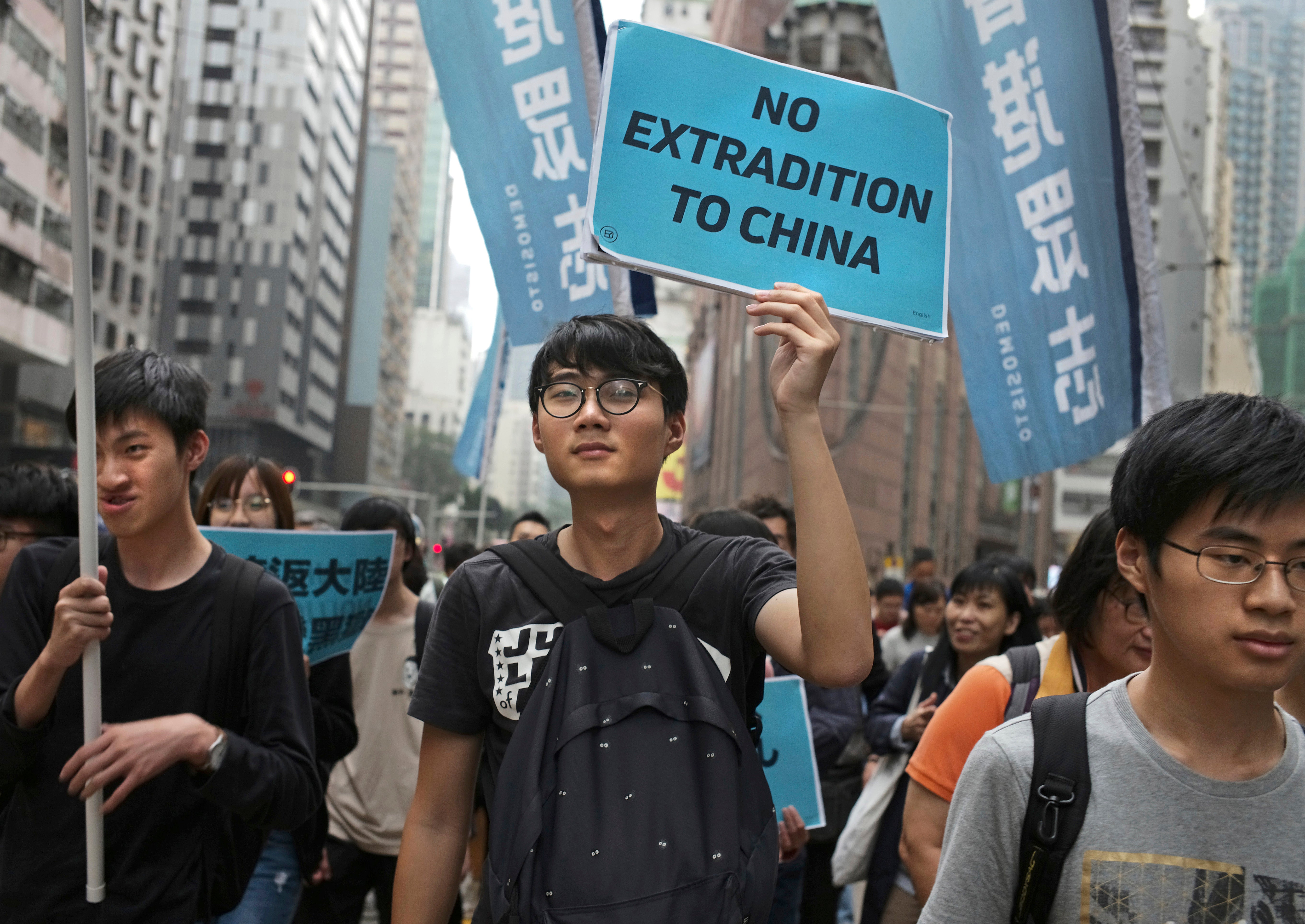 Protesters with placards and flags against an extradition law march toward the government headquarters in Hong Kong, Sunday, March 31, 2019. Business and human rights groups are expressing concern over proposed changes to Hong Kong’s extradition law that would allow suspects to be sent to mainland China where they could be subject to torture and unfair prosecution. (AP)

HONG KONG — Business and human rights groups are expressing concern over proposed changes to Hong Kong’s extradition law that would allow suspects to be sent to mainland China, where they could be subject to torture and unfair prosecution.

They say the move would harm the Asian financial hub’s attractiveness to international business.

Hong Kong currently limits such extraditions to jurisdictions with which it has existing extradition agreements or to others on an individual basis under a law passed before the semi-autonomous territory’s handover from British to Chinese rule in 1997. China was excluded because of concerns over its poor record on legal independence and human rights.

However, changes to the Fugitive Offenders Ordinance and the Mutual Legal Assistance in Criminal Matters Ordinance would expand the scope for the transfer of criminal suspects to China and remove the legislature’s right to scrutinize individual extradition decisions filed by Hong Kong’s chief executive.

Thousands of members of the city’s beleaguered pro-democracy camp marched to government headquarters on Sunday afternoon, an unusually large turnout for such events in recent years.

“The number of people turning up speaks loads about the concerns of Hong Kong people,” Alan Leong, chairman of the Hong Kong Civic Party, told participants.

“Hong Kong people have complete lack of confidence in the independence and impartiality of the judicial system in China,” said Albert Ho, chairman of the Hong Kong Alliance in Support of the Patriotic Democratic Movement in China.

In a statement issued Sunday, Sophie Richardson, China director at Human Rights Watch, said, “These amendments would heighten the risk for human rights activists and others critical of China being extradited to the mainland for trial on fabricated charges.”

“The amendments would tarnish Hong Kong’s reputation for the rule of law, and should be scrapped,” Richardson said, adding that the legal changes would put Hong Kong people “at risk of torture and unfair trials.”

Those concerns were reflected in a letter to Hong Kong Chief Executive Carrie Lam authored by Human Rights Watch along with the Hong Kong Human Rights Monitor and the local branch of Amnesty International.

The groups warned that fear of extradition to China — which routinely uses trumped-up charges of tax evasion or other economic crimes to punish political critics — could stifle civil society and freedom of speech in Hong Kong, where civil liberties are already under assault from pro-Beijing groups. In recent years, several people connected with a Hong Kong publishing house that produced unflattering books on mainland Chinese leaders have appeared in Chinese police custody after apparently being abducted, along with a prominent business person wanted on the mainland.

Unlike China, Hong Kong is subject to the U.N. International Covenant on Civil and Political Rights and the Convention against Torture and Other Cruel, Inhuman or Degrading Treatment or Punishment, as well as “customary international law,” which “prohibit returning people to places where there is a real risk of torture and other ill-treatment, unfair trials, and other serious human rights violations,” the letter said.

Separately, the American Chamber of Commerce in Hong Kong issued a letter saying its members “continue to have serious concerns” about the proposed changes, saying they would “reduce the appeal of Hong Kong to international companies considering Hong Kong as a base for regional operations.”

“Hong Kong’s international reputation for the rule of law is its priceless treasure,” said the letter.