Japan to unveil new era name ahead of abdication 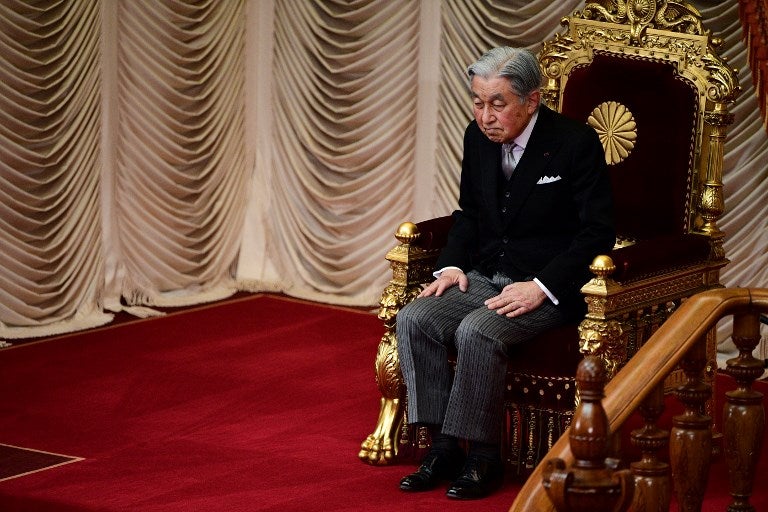 Japan’s Emperor Akihito prepares to deliver a speech at the opening ceremony of the ordinary Diet session in Tokyo on January 28, 2019. AFP

TOKYO, Japan – With one month to go until the historic abdication of Emperor Akihito, Japan will Monday unveil the name of the new era that will be ushered in when his son ascends the Chrysanthemum Throne.

It may appear trivial to outsiders, but the announcement of a new era name is a massive event in Japan that will be marked with special newspaper editions, calligraphy shows and public festivities.

Although the Gregorian calendar is widely used in the world’s third-largest economy, Japan is the only country still using Chinese-style imperial calendars for private and public documents as well as computer records.

The new era name therefore has a huge impact on daily life and anticipation is at fever pitch to see what will replace the era that marked Akihito’s reign — “Heisei” or “peace prevails everywhere.”

Highly secretive talks have been ongoing for months to pick a name for the new era, which should have a “positive meaning and be ideal for the Japanese people,” according to government sources cited in local media.

The final selection will be made on Monday when a nine-member panel reportedly including Nobel Prize-winning stem cell scientist Shinya Yamanaka will whittle down the final choice from at least five possible names put forward by scholars.

The new name must adhere to stringent guidelines. It should consist of only two “kanji” or characters, be easy to read and write, and not employ common names.

The new name is also unlikely to start with the first letter of any of the last four eras: Heisei, Showa, Taisho and Meiji.

Company names are excluded as well as the most popular choices in private guessing competitions, amid fevered speculation online as to what the new name could be.

The ailing Akihito will step down on April 30 and his son Crown Prince Naruhito will take over the next day.

Japan has had nearly 250 eras or “gengo” since adopting the system in the 7th century, and in recent times, one era has run the entire length of a monarch’s rule.

But the announcement of a new era is a real headache for calendar publishers featuring both Western and imperial dates, while central and local governments must scramble to change dates on official documents.

The tech sector is also bracing for the transition, amid fears there could be a computer glitch similar to the “Y2K” bug that sparked concerns ahead of the year 2000.

Others view the change in era name as a bonanza.

For example, companies that manufacture private ink seals — commonly used in Japan to sign official documents — are expected to benefit and they have already reported strong advance orders.

Financial traders are also pinning their hopes on the new era name to bolster a shaky market.

“New era-related shares such as printing companies have already been bought widely,” said Toshikazu Horiuchi, a broker at IwaiCosmo Securities.

“We hope this festive sentiment will boost the entire market,” he added.

Chief Cabinet Secretary Yoshihide Suga will put the nation out of its misery around 11:30 local time (0230 GMT), revealing the name handwritten on a paper board.

“I will pay attention that the new name will be widely accepted by the people and deeply rooted in their lives,” Abe has told parliament. /cbb