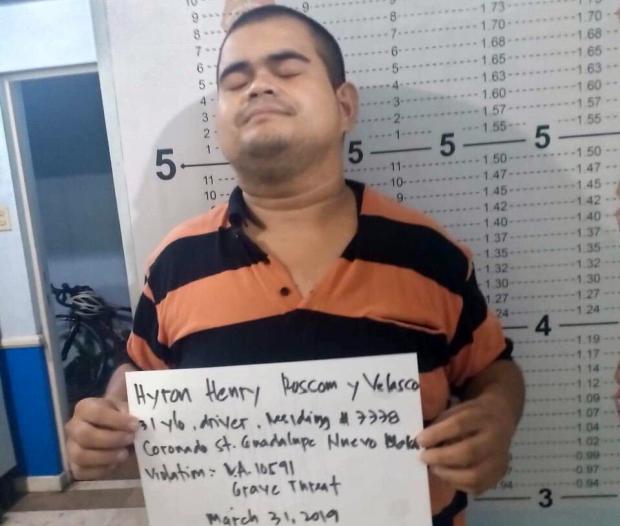 Grab driver Hyron Henry Roscom was arrested on Sunday, March 31, after pointing a replica gun at an on-duty security guard in front of a restaurant in Makati City. (Photo from the Southern Police District)

MANILA, Philippines — A Grab driver was arrested on Sunday after pointing his gun at an on-duty security guard in front of a restaurant in Makati.

According to a Southern Police District (SPD) report, 29-year-old security guard Genonevo Azarcon Jr. was on duty at Tides Grill and Bistro in Barangay Olympia in Makati when the Grab driver, 31-year-old Hyron Henry Roscom, got out of his vehicle and pointed a gun at the guard around 2:20 a.m.

The guard was assisting customers who were about to leave the parking area when the driver got out of his car and “no apparent reason” took out a firearm from his Hyundai Accent Sedan and pointed it at the guard, the SPD said.

Following the encounter, Azarcon sought help from barangay patrol watchmen near the restaurant.

They immediately arrested Roscom and seized his gun, which turned out to be a replica of a .38-caliber revolver.

Roscom was turned over to the Station Investigation Division of the Makati City Police Station.