newsinfo / Nation
Nation
SINGLED OUT FOR BEING CRITICAL OF ADMINISTRATION 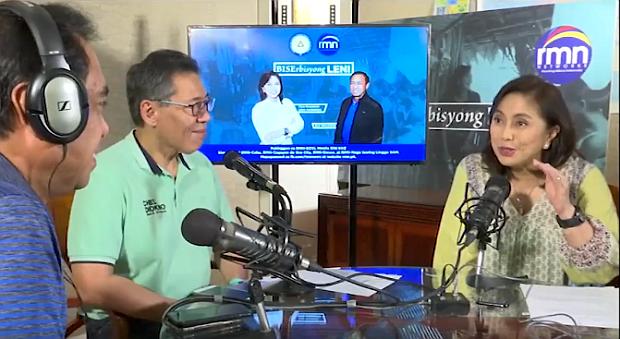 “When I saw the pictures, I felt like it was a warning for the members of media that they would suffer the same fate if they follow what Rappler is doing,” Robredo, speaking in Filipino, said during her weekly radio show, “BISErbisyong LENI,” aired over on AM station RMN-DZXL 558.

Ressa was arrested at the Ninoy Aquino International Airport shortly after arriving from a trip in San Francisco, California. She was arrested over her case for alleged violation of the Anti-Dummy Law.

Robredo said Ressa was being singled out, noting that other political personalities involved in and convicted of crimes remained free, particularly former first lady Imelda Marcos, who had been convicted of graft.

“We are not asking for her to be given special treatment, but for me, file a case if someone should be held accountable. But here, it looks like she is being singled out,” Robredo said.

“We know that there are big personalities who have been charged with corruption. Former first lady Imelda Marcos was convicted, but she remains free. Instead of filing a case or imprisoning them, these personalities are free and are even given a position in the government,” Robredo added.

Robredo also called on Filipinos to be more concerned about the issue, saying that the nation would not benefit from the silencing of media outlets.

Meanwhile, Chel Diokno, human rights lawyers and opposition senatorial candidate, who was a guest at the Vice President’s program, echoed Robredo’s comments, underscoring the importance of media in spreading factual news, especially with the prevalence of fake news in the country.

“We do not need fake news. We need to know the truth),” Diokno said in Filipino. “When the truth is gone, we cannot make informed decisions. That is why the media is important because we cannot simply say free expression if there is no information.” /atm