CANBERRA, Australia — Police in Australia set off a panic when they locked down a Melbourne train station on Thursday after a street entertainer’s instrument was mistaken for a rifle. 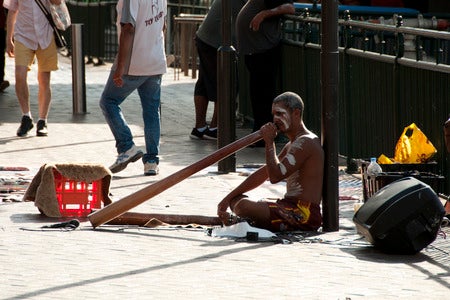 Commuters described panic at Melbourne’s Flagstaff Station when police in body armor carrying assault rifles stopped a train during morning rush hour. Terrified passengers were in tears and phoned relatives to tell them they were loved.

Police said a passenger reported busker Will Austin behaving suspiciously on a train as he performed breathing exercises in preparation for playing his didgeridoo, a polished-wood indigenous wind instrument which he carried in a bag mistakenly described to police as a rifle case.

Austin said he was stopped by police after he got off the train at the station. He was concentrating on his smartphone at the time.

“Everyone was running and I probably looked pretty suspicious, I suppose, just waltzing around and slowly walking out of Flagstaff and I think that’s where police stopped me,” Austin told reporters.

“A few police officers approached me — they kind of chased after me to catch up because I was on my way, but one requested to look in my bag,” he added.

Victoria state Police Chief Commissioner Graham Ashton said no firearm was found and the train was allowed to proceed.

Train passenger Sarsha Vadocz said she was unconcerned at first when the train stopped for five minutes at the station. Then someone yelled there was a gunman on the train and passengers dived to the floor.

“There were fully armed officers outside and they were screaming at everyone: ‘Get back on the train. Don’t get out,'” Vadocz told Ten Network television. “The woman next me, she was really upset. She was really in hysterics.”

“It’s funny to look back on now, but at the time it was pretty scary for everyone involved,” she added. NVG