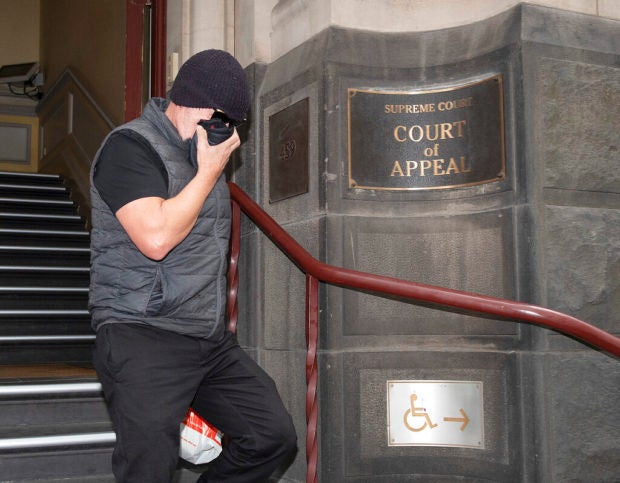 Workplace bullying claimant David Hingst covers his face as he leaves the Court of Appeal in Melbourne, Australia Friday, March 29, 2019. The Australian appeals court on Friday dismissed a bullying case brought by the engineer Hingst who accused his former supervisor of repeatedly breaking wind toward him. Image: Ellen Smith/AAP Image via AP

MELBOURNE, Australia  — An Australian appeals court on Friday dismissed a bullying case brought by an engineer who accused his former supervisor of repeatedly farting towards him.

The Victoria state Court of Appeal upheld a Supreme Court judge’s ruling that even if engineer David Hingst’s allegations were true, flatulence did not necessarily constitute bullying.

Hingst said he would take his case to the High Court, Australia’s final court of appeal.

Hingst testified that he had moved out of a communal office space to avoid supervisor Greg Short’s flatulence.
Hingst told the court that Short would then enter Hingst’s small, windowless office several times a day and break wind.

Hingst “alleged that Mr. Short would regularly break wind on him or at him, Mr. Short thinking this to be funny,” the two appeal court judges wrote in their ruling.

Hingst said he would spray Short with deodorant and called his supervisor “Mr. Stinky.”

“He would fart behind me and walk away. He would do this five or six times a day,” Hingst said outside court.

Short told the court he did not recall breaking wind in Hingst’s office, “but I may have done it once or twice.”

Hingst also accused Short of being abusive over the phone, using profane language and taunting him.

The appeal judges found Hingst “put the issue of Mr. Short’s flatulence to the forefront” of his bullying case, arguing that “flatulence constituted assaults.”

The court found that Short did not bully or harass Hingst. Hingst had failed to establish that Construction Engineering had been negligent.

Hingst worked for Construction Engineering as a contract administrator from May 2008 until April 2009.
He argues he was bullied in the workplace until his job was terminated.

Construction Engineering argued his job was terminated because of a downturn in construction work due to the global financial crisis in late 2008. MKH

This is why you should let go of that ‘unwanted gas’