‘Betrayal’: Thousands vent anger on Brexit Day that never was 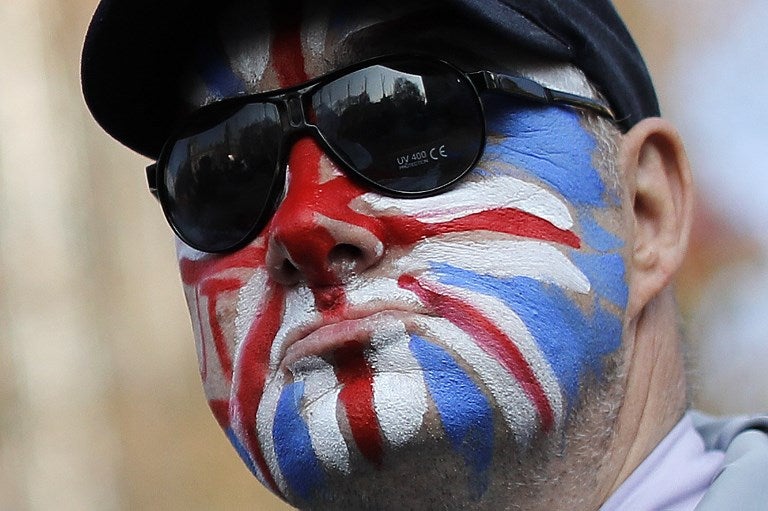 A pro-Brexit activist with his face painted in the colors of a Union flag reacts as he demonstrates near the Houses of Parliament in central London on March 29, 2019. British MPs on Friday rejected Prime Minister Theresa May’s EU divorce deal for a third time, opening the way for a long delay to Brexit — or a potentially catastrophic “no deal” withdrawal in two weeks.  AFP

LONDON, United Kingdom – Flying English flags and crying Brexit betrayal, thousands massed outside the British parliament on Friday on what should have been “Independence Day” — until political paralysis prompted a last-ditch delay.

Nearly three years after the divisive referendum that saw 52 percent of voters back leaving the EU, Britain’s MPs are at a loss on how, and even whether, the UK can properly leave the bloc.

As lawmakers voted inside to reject Prime Minister Theresa May’s agreement struck between London and Brussels — for a third time — crowds gathered in the sunshine outside on Parliament Square to demand MPs respect the vote of the majority.

“Brexit hard. Brexit now. Theresa May is a treacherous cow,” the crowd chanted.

“This is about democracy. It’s that simple. They’re playing Russian roulette with our country. I’m so angry about it. I’m 54 and I’ve never been on a protest in my life,” said Debbie, from Billericay, east of London, who was draped in the British flag.

“These Remain MPs have an arrogance. There’s going to be a massive kickback against them.”

Leave voters milled around holding up placards reading “Trust in politicians is dead” and “What is our liberty for if not to govern ourselves?” while others waved British, English, Welsh, Cornish and other UK flags.

The atmosphere was a mix of party, wake and protest — as the vote result triggered shrugs from people whose preference is for Britain to leave the EU with no deal at all.

“Stop the Brexit Betrayal”, “Give Our Kingdom Back” and “Free Britain Now” read some of the placards.

“This is so much bigger than party politics. It’s the fundamental question of what it means to be free. It’s 2019 in the UK and we’re having to think about our liberty. That worries me,” said John Abbott, 37, who traveled down from Nottingham in central England.

“There has been political chicanery and obfuscation by a bunch of rich idiots failing to do their jobs.

Others were led to the parliament building on the banks of River Thames by Scottish pipe bands and a fishing boat on the back of a truck.

“I’m not going to have my country taken over by a dictatorship,” megaphone-wielding Terry Calladine told AFP.

“All the Labor and Conservative MPs are a bunch of frauds that need dragging out by their hair,” he said.

“They are opposing what they obtained their seat on. That’s about as low as a snake’s belly can get.”

Suzanne Evans, a eurosceptic former member of the European Parliament, said the implications of failing to leave the EU on time at 2300 GMT on Friday were severe.

“This was supposed to be a celebration of our Independence Day. They promised us. And now we just can’t trust them at all. It’s absolutely disgraceful,” she said of Britain’s MPs.

“It is parliament versus the people. This has gone beyond being about Brexit.

“It’s about democracy. It’s about does the ballot box still work? From the shenanigans across the road, the answer has to be no. We are in dire straits as a country.”

Jan Bowman, a 63-year-old artist Jan, said she would have been carrying “fireworks”, rather than a large banner, if Britain had really been leaving the EU on Friday.

Small numbers of fiercely pro- and anti-Brexit demonstrators have kept up a constant presence in Westminster in recent months.

Ardent Brexiteers want Britain to leave the bloc now without any divorce deal in place, falling back on World Trade Organization (WTO) rules.

At the other end of the political spectrum, europhile London Mayor Sadiq Khan launched a campaign bus on Friday emblazoned with the slogan “We are all Londoners”.

“I think we can all agree that Brexit has been a complete and utter mess,” the mayor told AFP.

Elsewhere, the Church of England has invited parishioners to “cafe-style meetings” over the weekend in a bid to forge some unity over that most British of things: a cup of tea.

Suitable Bible passages and newly-composed prayers will be chosen under the slogan “Together” to prompt the faithful — whatever their views about leaving the EU — to start conversations. /cbb