Lights out around the globe for Earth Hour | Inquirer News

Lights out around the globe for Earth Hour 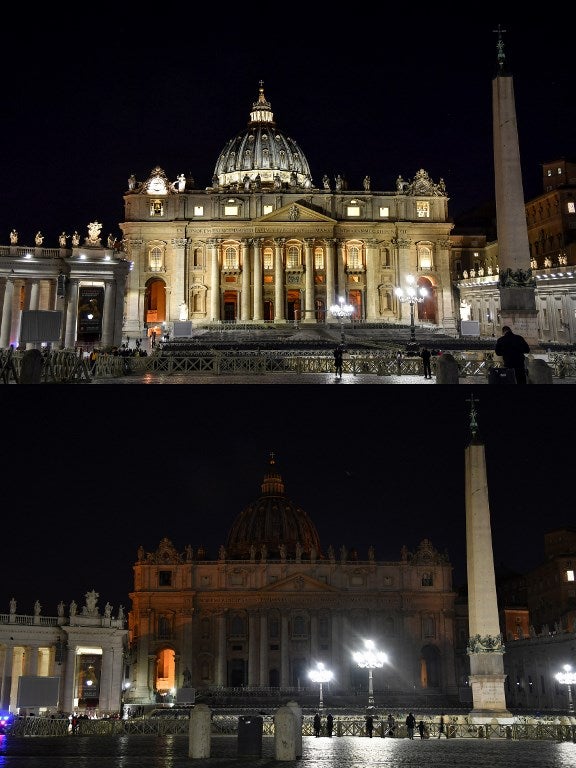 This combination of pictures created on March 30, 2019, shows St. Peter’s Basilica before (top) and after (bottom) being plunged into darkness for the Earth Hour environmental campaign in the Vatican on March 30, 2019. AFP

PARIS, France – The Eiffel Tower, the Sydney Opera House and even the ancient Acropolis in Athens were plunged into darkness for an hour Saturday as part of a global campaign to raise awareness about climate change and its impact on the planet’s vanishing plant and animal life.

The 13th edition of Earth Hour, organized by green group WWF, saw millions of people across 180 countries turn off their lights at 8:30 pm to highlight energy use and the need for conservation.

“We are the first generation to know we are destroying the world.  And we could be the last that can do anything about it,” the charity said.

“We have the solutions; we just need our voices to be heard.” 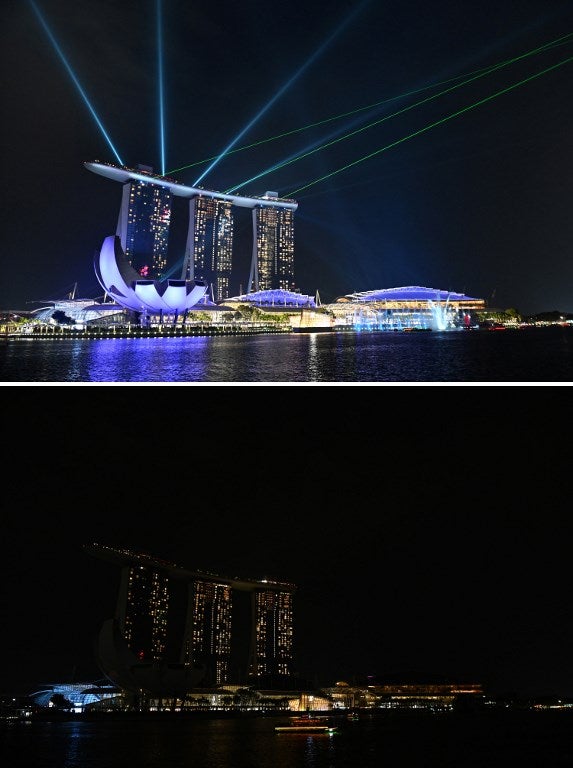 A combination image of two photographs shows a general view of the Marina Bay Sands hotel and resort lit up (top) and after the lights were turned off (bottom) during the Earth Hour environmental campaign in Singapore on March 30, 2019. AFP

“It’s about individuals taking personal action but joining with hundreds of millions of people around the world to show that not only do we need urgent action on climate change but we need to be protecting our planet,” he added.

Dozens of companies around the world said they would take part in this year’s campaign, which also saw Singapore’s skyline go dark and Hong Kong turn off the lights along the Victoria Harbor. 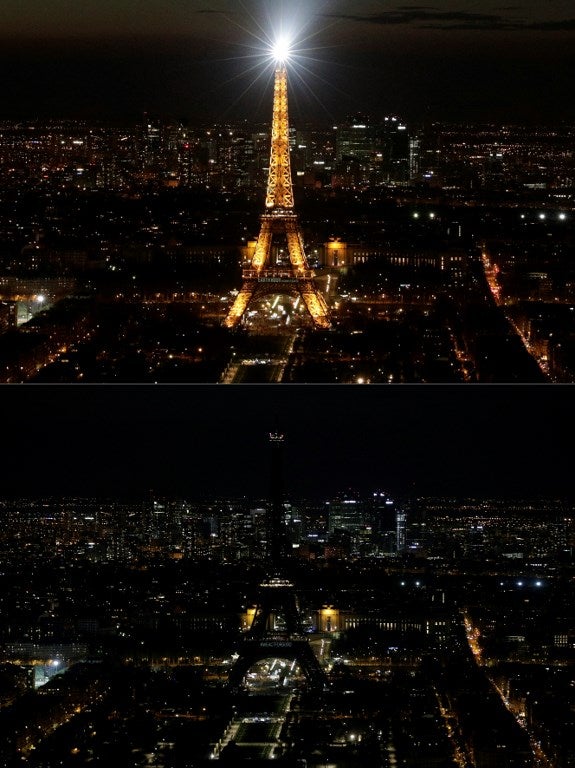 This combination of pictures created on March 30, 2019, shows the Eiffel Tower, illuminated (up), in Paris and switched-off (down) during the a Earth Hour organized by the green group WWF. AFP

Other global landmarks that flicked the switch included Eiffel Tower in Paris, New York’s Empire State Building, Dubai’s Burj Khalifa, the Acropolis in Athens and the Kremlin building in Moscow.

The event comes after some of the most dire warnings yet on the state of Earth’s natural habitat and species.

WWF’s own “Living Planet” report in October said 60 percent of all animals with a backbone — fish, birds, amphibians, reptiles and mammals — had been wiped out by human activity since 1970. 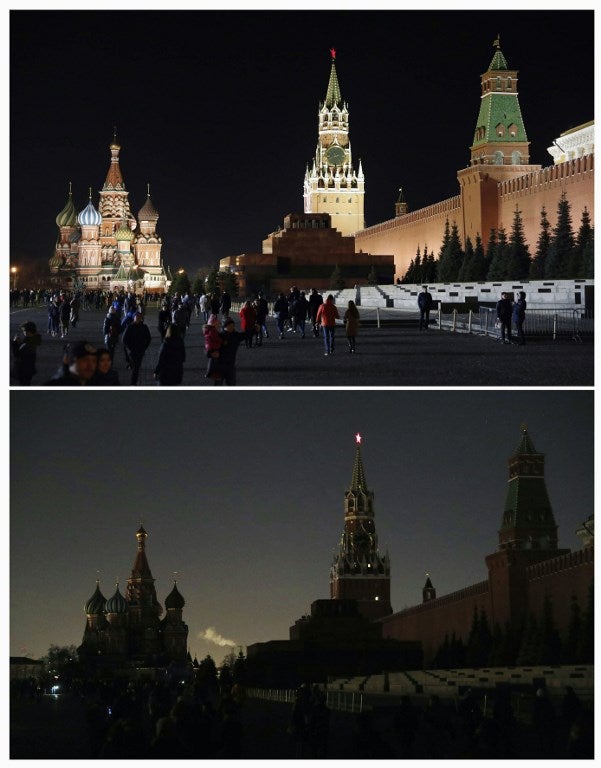 A combination of pictures made on March 30, 2019, shows the Kremlin lit up (top) and with its light turned off, as part of the “Earth Hour” environmental campaign in central Moscow. AFP

Another study said a recent decline in bugs that fly, crawl, burrow and skitter across still water — fueled by deforestation, urbanization and the rise of commercial farming — was part of an unfolding mass extinction event, only the sixth in the last half-billion years.

Last year, Earth Hour was observed in more than 7,000 towns and cities in 187 countries, according to the organizers.

While the lights-off event is a symbolic gesture, Earth Hour has led successful campaigns over the past decade to ban plastics in the Galapagos Islands and plant 17 million trees in Kazakhstan. /cbb 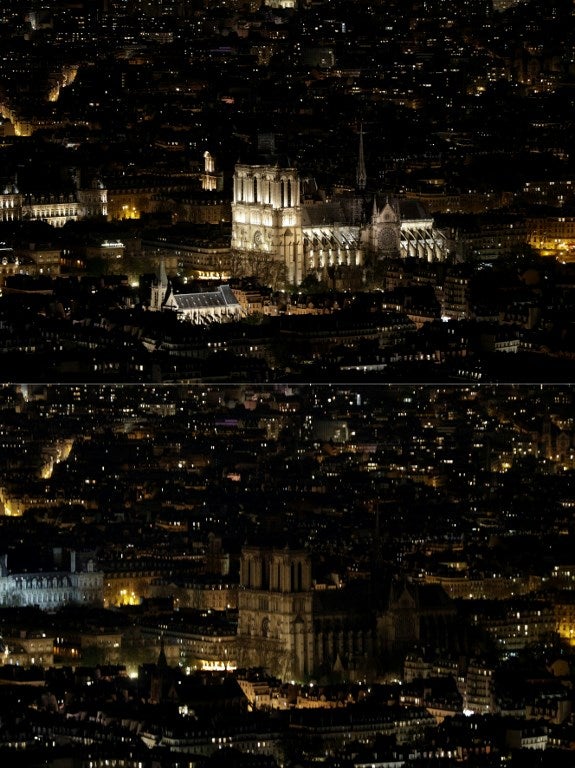 This combination of pictures created on March 30, 2019 shows N,otre-Dame de Paris Cathedral, illuminated (up), in Paris and switched-off (down) during the a Earth Hour organised by the green group WWF. AFP