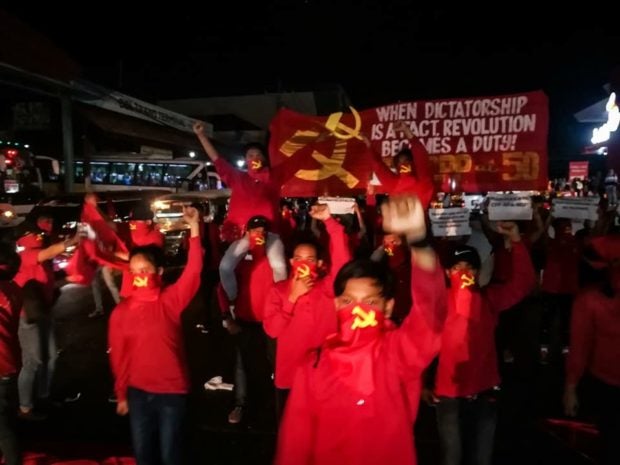 Members of the National Democratic Front in Southern Tagalog (NDF-ST) marched in Laguna, days before the 50th anniversary of the Communist Party of the Philippines (CPP).
Photo by Southern Tagalog Exposure

MANILA, Philippines–More than 300 members of various cause-oriented organizations converged in Manila to denounce the alleged recruitment of the Communist Party of the Philippines (CPP) among the youth to join the armed struggle of the New People’s Army (NPA).

The groups, mostly against the ideologies of the CPP-NPA, condemned the NPA for the celebration claiming there is no reason to celebrate their anniversary because the underground movement has long been a threat to the nation’s peace and security.

Members of KADRE also hit the CPP for encouraging citizens particularly the youth to join the underground movement during the recruitment being done at the Philippine Revolution Web Central (PRWC), the website of the CPP-NPA-National Democratic Front.

The groups said the communist organization has long been doing the recruitment of young people online to advance the NPA’s ideologies, which they claimed being neglected by the the communist leaders in Europe and other parts of Asia.

Despite the localized peace talks being pushed by the national government, the NPA is resisting the chance to attain a lasting peace by rejecting this kind of peace initiative, said Dario Bolivar, who is among the protesters.

Bolivar also said CPP founder Joma Sison has long been out of contact with the real situation of the communists in the country.

He also said that there are former rebels who returned to the fold of the government became responsible and useful members of the society through the government’s livelihood programs. /jpv