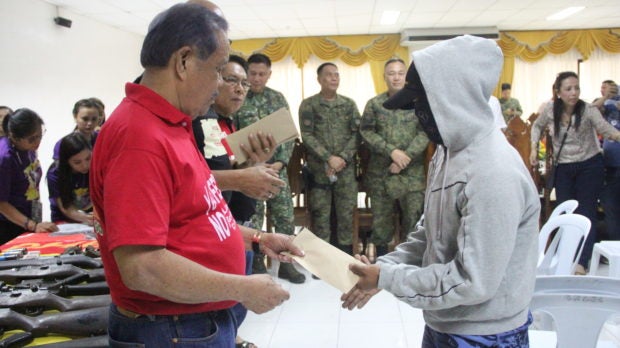 Sultan Kudarat Gov. Pax Mangudadatu (left) hands over cash assistance to one of the 19 former NPA rebels who surrendered on the day the armed wing of the communist movement marked its 50th founding anniversary in Sultan Kudarat. (33rd IB photo)

ISULAN, SULTAN KUDARAT — At least 19 communist rebels operating in the boundaries of four Mindanao provinces surrendered to the Army on Friday as the communist-led New People’s Army (NPA) marked its 50th founding day.

The communist rebels were presented to Sultan Kudarat Gov. Pax Mangudadatu during ceremonies on Friday and were given cash assistance for returning to the fold of the law.

Mangudadatu told the former rebels that they made the right decision to surrender and live normal lives.

“You cannot win a battle against mighty government forces,” he told the former rebels in Filipino. “Good that you chose to join us and become productive citizens.”

After their surrender, the former rebels received livelihood assistance, payment for their firearms as well as housing through the Enhanced Comprehensive Local Integration Program (E-CLIP) of Sultan Kudarat.

They used to operate in the provinces of North Cotabato, Davao Del Sur, Sultan Kudarat, and South Cotabato.

“Their surrender on the very day of the NPA’s supposed founding anniversary is a very clear indication that its ranks continue to decline due to the relentless efforts of the troops on the ground to hunt them down while providing space for them to surrender,” Col Efren Baluyot, the Brigade Commander of the 1st Mechanized Infantry Brigade, said./lzb