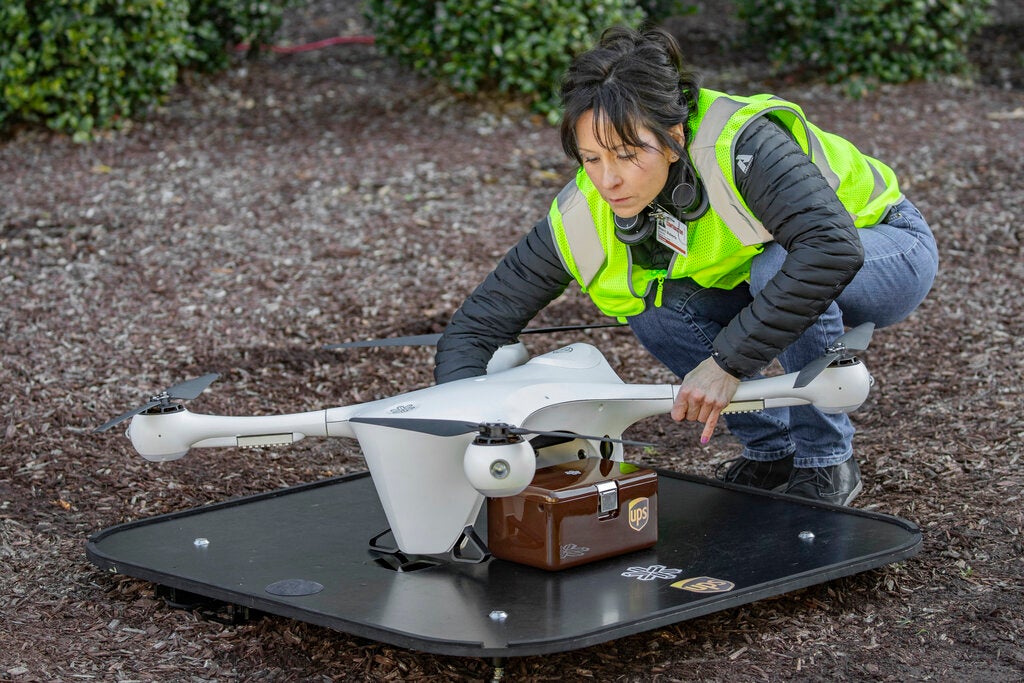 In this March 2019 photo provided by UPS, a drone operator handles a drone used for carrying medical specimens at a landing area at WakeMed hospital in Raleigh, N.C. UPS, Matternet and WakeMed announced a program on Tuesday, March 26, 2019, to use drones for commercial flights of blood samples and other medical specimens at the North Carolina hospital campus. (UPS via AP)

RALEIGH, North Carolina — A pioneering use of drones to fly blood samples across a North Carolina hospital campus launched Tuesday in the latest move to expand their roles in business and health care.

The short trips between WakeMed buildings in Raleigh mark the first time the Federal Aviation Administration has allowed regular commercial flights of drones carrying products, according to UPS and drone company Matternet, which partnered with the hospital on the program.

“This is a turning point, and it’s an historic moment because this is the first FAA-sanctioned use of a (drone) for routine revenue-generating flights,” Bala Ganesh, vice president of UPS’ advanced technology group, said in an interview before the announcement.

The FAA confirmed in a statement Monday that it hadn’t previously allowed drones to make routine commercial package deliveries, known as revenue flights. Others have flown drone deliveries as part of smaller-scale tests or demonstrations.

The WakeMed program will start by flying patients’ medical samples one-third of a mile (.5 kilometer) from a medical park to the main hospital building for lab testing at least six times a day five days a week, Matternet CEO Andreas Raptopoulos said in an interview. Vials of blood or other specimens will be loaded into a secure box and carried to a drone launching pad, where they will be fastened to the aircraft and flown to another building. He said the flights will technically be within sight of operators on either end of the route, and they are authorized to fly above people.

The aim is to cut down on the time it takes to transport the time-sensitive samples typically driven on the ground.

“This is going to bring tremendous benefit to health care,” he said in an interview. “Health care is one of these domains of commercial activity where being fast really matters.”

The announcement doesn’t mean routine physical checkups this year or next will feature unmanned aircraft whizzing into your internist’s office to speed along your cholesterol results, experts say.

But the North Carolina program could expand to flying miles-long routes between Raleigh-area WakeMed buildings in the coming months, Raptopoulos said. He also said medical specimen flights could start at one or two more hospitals in other cities later in 2019.

North Carolina is one of nine sites participating in the FAA’s pilot program to accelerate integrating drones for new uses ranging from utility inspections to insurance claims. The test sites get leeway trying new innovations while working closely with the federal officials in charge of regulating the drones.

At other program test sites, drone operators recently delivered ice pops to doorsteps in a Virginia neighborhood, and officials in Reno, Nevada, are in early testing of a program to deliver defibrillators to people having health emergencies.

The Nevada defibrillator project has so far been testing at a rural site and hasn’t begun home deliveries, said Rebecca Venis, the city’s communications director. The approval process for drone flights of medical devices or supplies is complex because they may contain hazardous materials.

“It’s different than dropping a package,” she said.

Mark Blanks, the director of the Virginia Tech Mid-Atlantic Aviation Partnership, also said the approval to fly commercial drones can be a significant achievement.

“It’s not a safety piece; it’s an economic licensing portion,” he said.

Colin Snow of the drone research firm Skylogic said it remains to be seen how cost-effective medical drone deliveries will be. He said regulatory hurdles and the significant costs of establishing the programs could hinder their wide rollout across the country.

“It just goes down to the old adage: Just because you can, doesn’t mean you should,” he said. “They’re cool, headline-making tests. But when you get down to … the economics of logistics, that’s a different matter.”