US lawyer gets testimony of victims in case vs priest 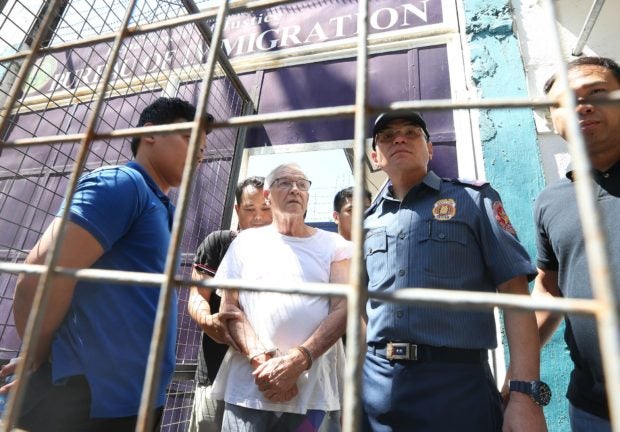 EMBARRASSMENT An American lawyer says the case against Fr. Kenneth Bernard Pius Hendricks (in cuffs) is an embarrassment. —MARIANNE BERMUDEZ

TACLOBAN CITY — A US-based lawyer has touched base in a town in Biliran province with alleged victims of sexual abuse by an American priest who is now detained at a Quezon City jail and is facing a string of cases in the United States for his alleged sexual crimes in the Philippines.

McDonald Worley, a lawyer based in Houston, was in the town of Naval, Biliran, recently to interview nine of the alleged victims of the priest, Kenneth Bernard Pius Hendricks.

Hendricks faced criminal cases for allegedly molesting several boys who served for him as altar boys in Biliran.

At a news conference, Worley said he was not involved in the criminal prosecution of Hendricks but in making the priest compensate his alleged victims, who were now in their early 20s.

“I have nothing to do with the criminal aspect of the case,” Worley said.

“I just handle the civil side. So it’s basically money that has to be paid to the victims,” he said.

Hendricks had served as a missionary priest in Naval since 1988 and was arrested on Dec. 5, 2018, inside St. Isidore the Worker Chapel by members of the US Department of Homeland Security with the help of Philippine immigration authorities and local police.

The 77-year-old priest is currently detained at a Quezon City jail after he was charged with acts of lasciviousness and child abuse.

Hendricks also faced federal cases in the United States for engaging in illicit sexual acts in the Philippines.

“I am sad that this happened, which should have never happened,” said Worley during his news conference.

Worley said he was embarrassed that a fellow American came to the Philippines and did “horrible” things to children.

He said the narrative of victims, who had been brave enough to speak out, had made him sick.

“It’s really brave for them to say ‘hey, this happened to me’ and I will say something and do something about it so this will not happen again to somebody else,” Worley said.

He said the narration of victims, who were 7 and 12 years old at the time of the alleged abuse, would be used to pin down the disgraced priest in the case for compensation that he was filing in the United States.

He urged other alleged victims of Hendricks to come out and testify.

Read Next
Hospital using drones to fly blood samples between buildings
EDITORS' PICK
New strategies urged to improve public transport
Chaos as thousands return to work in Metro Manila
Cherry Mobile teams up with Cloud Panda PH, launches online store
Leveling up your ‘lutong bahay’ with the kitchen companion you never knew you needed
Senate OKs on 3rd reading bill allowing school opening after August
Someone from the Philippines can become $356 Million richer this Tuesday
MOST READ
‘If I had not been SolGen, I will make you eat your words,’ Calida tells Coco Martin
51 percent of German firms holding back investments in PH, but not because of COVID-19
Chaos as thousands return to work in Metro Manila
Duterte certifies as urgent anti-terror bill
Don't miss out on the latest news and information.

ABS-CBN: PDRs do not result in foreign ownership