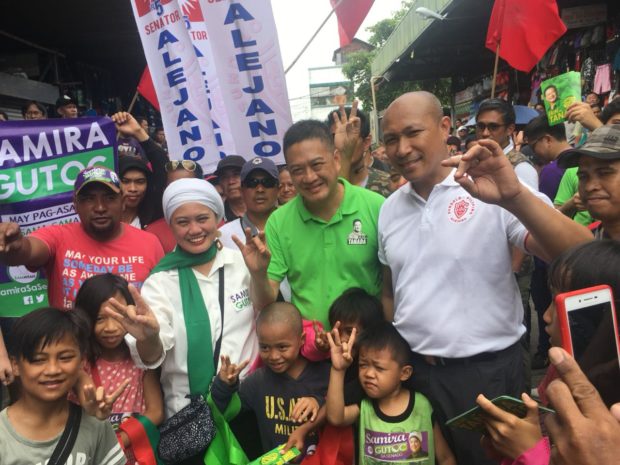 In a statement, Magdalo Rep. Gary Alejano called on involved local authorities and international institutions to look into the matter, stressing that the issue “should not be dismissed by just attacking the credibility of the messenger.”

“It is a grave concern that an intelligence report detailing the involvement of Michael Yang and Allan Lim to the illegal drug trade was not acted upon by the PNP, PDEA, and Malacañang considering that the war on drugs is the central policy of the Duterte administration,” Alejano pointed out.

Appearing before select members of the media on Sunday, Acierto said presidential economic adviser Michael Yang and a Chinese national Allan Lim “have involvement in the drug trade.”

Alejano shared Acierto’s statement that it was an irony that the latter’s intelligence report was not acted upon.

“If the President was really mad about illegal drugs, why did he not order (Yang and Lim) arrested? Or even just have them investigated?” Acierto reportedly said.

Marawi civic leader and peace advocate Samira Gutoc, meanwhile, lamented how the poor people were “easily tagged in the narcotics trade while big businessmen who are close to those in power enjoy the benefit of the doubt.”

“While many poor and powerless are being easily targeted in operations, those big businessmen who are close to those in power enjoy due process, benefit of the doubt,” Gutoc said, adding that this “raises alarm and many questions on the authenticity of the government’s drug war.”

Ombudsman should step in

Former Congressman Erin Tañada and election lawyer Romy Macalintal both said the Office of the Ombudsman should motu propio or on its own investigate the serious allegation even without a complaint.

“This is a challenge to the Ombudsman because there are government officials involved…Do your homework, these people are not immune from suit. You can investigate them and file appropriate charges if warranted,” Tañada said.

Former Solicitor General Florin Hilbay for his part pointed out that the President is not immune from the investigative powers of the Ombudsman “for purposes of impeachment or for purposes of publicizing the allegations of Mr. Acierto and determining the credibility of those allegations.”

Alejano said he had filed House Resolution No. 542 pushing for the creation of an independent ad hoc committee on the anti-drug campaign in a bid to “study the root causes of illegal drugs and propose an appropriate, effective and humane strategy to address the issue.”

In a speech on Sunday night, Duterte admitted that the drug problem in the country had “worsened” despite his brutal war against drugs, fearing that the Philippines might end up like the drug cartel-controlled parts of Mexico. In October 2018, the Chief Executive denied Yang was involved in the drug trade.

“Obviously, the motive is since he’s [Acierto] been accused of involvement in drugs, he wants to get back. That’s why he’s pointing fingers to whomever,” Panelo said in a briefing. /jpv