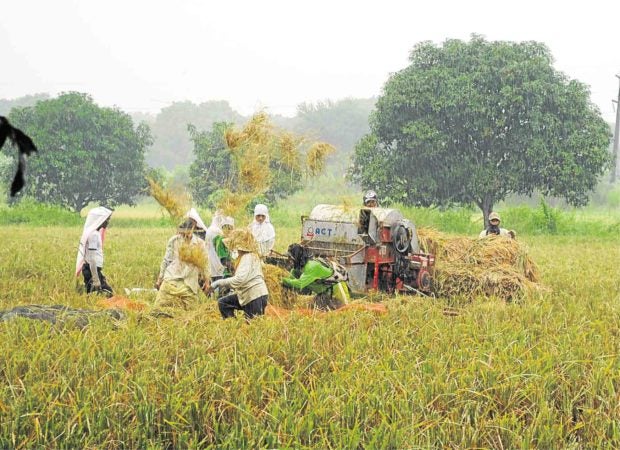 WATER FOR FARMS Farms in Nueva Ecija province will soon benefit from an irrigation system from Israel that will maximize water use in rice fields. —ANSELMO ROQUE

CABANATUAN CITY — Israel has offered to help drought-stricken areas in Nueva Ecija province through a technology that can bring water to thousands of hectares of rice fields, according to Agriculture Secretary Emmanuel Piñol.

Israeli Agro-Industrial Co. has proposed to fund and build 6,200 units of solar-powered irrigation systems (SPIS) in the country, Piñol said during a recent dialogue with farmers here.

The technology is one of the banner programs of the Department of Agriculture to increase farm productivity.

SPIS consists of one or more solar panels, a pump, electronic controls or a controller device to operate the pump, storage tank and conveyance structures.

They have adopted alternate wetting and drying (AWD), a rice technology introduced by the Philippine Rice Research Institute to provide spacing for irrigation supplies.

The technology is being used in Palayan and Cabanatuan cities and the towns of Sta. Rosa, San Leonardo and Peñaranda within the NIA-Upriis, said Danilo Bolos, head of the provincial fisheries and agriculture council.

“It’s no longer the same as before when farmers wanted to always irrigate their paddies,” Bolos said. They now allow rice fields to be nearly dry after transplanting, he added.

During such period, the NIA-Upriis would direct its water supply to other parts of its service areas. It has also made a program for implementation of AWD.

Water in Pantabangan Dam in Nueva Ecija is enough for the programmed areas and surplus can be used at the start of the wet season, irrigation officials said.

Bolos said farmers had observed significant improvement in their crops compared to soaked plants. With AWD, they could prevent pests that cause rice stalks to fall, which are common in irrigated rice paddies, he said.

Domingo said his office had programmed more than 31,000 hectares for the dry crop season. The dams have enough water to sustain supply in these areas.

Records showed the NIA-Upriis had programmed 125,848 ha of rice land in its service areas this summer. So far, more than 47,131 ha have already been planted. —Armand Galang