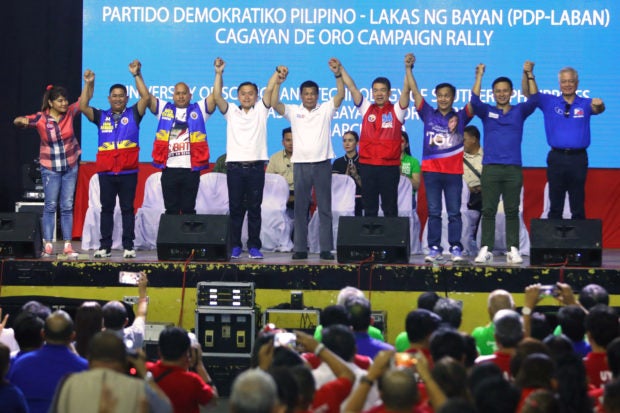 Duterte was the guest of honor and speaker in the PDP-Laban sortie at the University of Science and Technology of Southern Philippines (USTP) in Barangay Lapasan.

He later raised the hands of the political party’s official senatorial candidates.

In the middle of his close to two – hour speech, the President even hurled a copy of the book “Altars of Secrets,” that he said detailed the scandals inside the Roman Catholic Church.

“There is a worldwide investigation of abuses against children and this is why nuns are protesting in Vatican. Was I lying? That’s what I have been telling you. I am just being frank. When you give me a problem, I will really retaliate,” he said in his speech at USTP.

“They said I was the one who gave the order to kill bishops and priests. Yes, that’s true. That’s because they started it.

“You Catholics, the priest, all I want is to tell the people about me and the truth,” he added.

Duterte was welcomed by Cagayan de Oro mayor Oscar Moreno, who is also a member of the PDP-Laban.

Moreno was accused by his political rival as “the most anti-Duterte mayor in the Philippines.”

In an interview after the rally, Moreno said the presence of the President would disprove that accusation.

“It speaks for itself,” the mayor said, in reference to Duterte’s presence, adding that he was happy the city hosted the PDP-Laban sortie. / gsg

Back on the throne