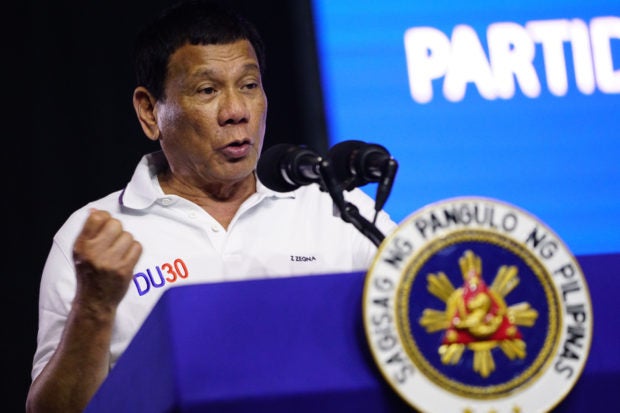 MANILA, Philippines — President Rodrigo Duterte has urged the Office of the Ombudsman to file charges and investigate government officials he fired for corruption.

“There is corruption. I told the Ombudsman. Investigate and file charges,” Duterte said in a speech during the campaign rally of the Partido Demokratiko Pilipino–Lakas ng Bayan (PDP-laban) in Cagayan de Oro on Sunday night.

Since he assumed the presidency in 2016, Duterte said he would fire government officials even with just a “whiff of corruption.”

In his corruption drive, Duterte’s longtime allies and closest aides were axed from the Cabinet.

Among those fired include Peter Laviña, who served as spokesman for Duterte during the 2016 national elections, following corruption allegations at the National Irrigation Administration (NIA).

He also fired former Interior Secretary Ismael Sueno in April 2017 due to corruption allegations over the irregular purchase of the Rosenbauer firetrucks from Austria.

Even Duterte’s fraternity brothers at Lex Talionis, Michael B. Robles and Al C. Argosino, who are former associate commissioners at the Bureau of Immigration (BI), were fired after allegedly extorting money from Chinese gaming tycoon Jack Lam.

Malacañang had earlier said it was the Ombudsman who must initiate the investigation on fired officials and not the Office of the President. /kga