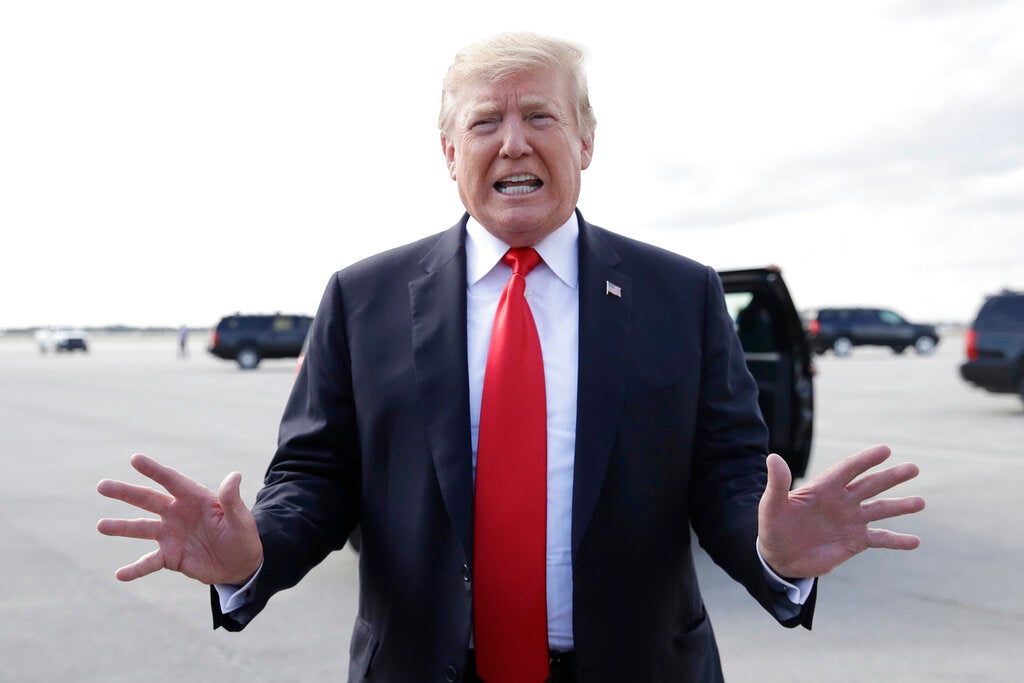 WASHINGTON — The Justice Department declared Sunday that special counsel Robert Mueller’s long investigation did not find evidence that President Donald Trump’s campaign “conspired or coordinated” with Russia to influence the 2016 presidential election, setting off celebrations of vindication by Trump and his supporters. Mueller also investigated whether Trump obstructed justice but did not come to a definitive answer.

In a four-page letter to Congress, Attorney General William Barr quoted Mueller’s report as stating it “does not exonerate” the president on obstruction. Instead, Barr said, it “sets out evidence on both sides of the question.”

Trump, in Florida, said the report proved “there was no collusion” as he has contended for many months. He also claimed it showed there was no obstruction and said it was a shame that he and the nation had to suffer through “an illegal takedown that failed.”

Barr released his summary of Mueller’s report Sunday afternoon. Mueller wrapped up his investigation on Friday with no new indictments, bringing to a close a probe that has shadowed Trump for nearly two years.

But the broader fight is not over.

Congress’ top Democrats, Chuck Schumer of New York in the Senate and House Speaker Nancy Pelosi, put out a statement saying Barr’s letter raises as many questions as it answers, including about his own decision not to prosecute on possible obstruction.

“Given Mr. Barr’s public record of bias against the special counsel’s inquiry, he is not a neutral observer and is not in a position to make objective determinations about the report,” they said. Trump’s claim of complete exoneration “directly contradicts the words of Mrs. Mueller and is not to be taken with any degree of credibility,” they added.

The Justice Department summary sets up a battle between Barr and Democrats, who called for Mueller’s full report to be released and vowed to press on with their own investigation.

For Trump, Barr’s report was a victory on a key question that has hung over his presidency from the start: Did his campaign work with Russia to defeat Democrat Hillary Clinton?

Still, Mueller’s investigation left open the question of whether Trump obstructed justice by firing FBI Director James Comey and drafting an incomplete explanation about his son’s meeting with a Russian lawyer during the campaign. That left it to the attorney general to decide. After consulting with other department officials, Barr said he and his deputy, Rod Rosenstein, determined the evidence “is not sufficient to establish that the president committed an obstruction of justice offense.”

Barr, nominated to his job by Trump last fall, said their decision was based on the evidence uncovered by Mueller and not based on whether a sitting president can be indicted.

Trump was at his Florida estate when lawmakers received the report. Barr’s chief of staff called Emmet Flood, the lead White House lawyer on the investigation, to brief him on the findings shortly before he sent it to Congress.

Mueller submitted his report to Barr instead of directly to Congress and the public because, unlike independent counsels such as Ken Starr in the case of President Bill Clinton, his investigation operated under the close supervision of the Justice Department, which appointed him.

The House Judiciary Committee chairman said Congress needs to hear from Barr about his decision and see “all the underlying evidence.”

“There must be full transparency in what Special Counsel Mueller uncovered to not exonerate the President from wrongdoing. DOJ owes the public more than just a brief synopsis and decision not to go any further in their work,” Nadler tweeted

However, Mueller was not able to interview Trump in person.

Barr said Mueller also catalogued the president’s actions including “many” that took place in “public view,” a possible nod to Trump’s public attacks on investigators and witnesses.

In the letter, Barr said he concluded that none of Trump’s actions constituted a federal crime that prosecutors could prove in court.

Democrats are reminding that the House voted nearly unanimously, 420-0, to release the full Mueller report, which they say is more important not than ever. “This is about transparency and truth — and a 4 page summary from Trump’s AG doesn’t cut it,” tweeted Rep. Mark Takano, D-Ca., the chairman of the Veterans Affairs Committee. “The American people deserve to see the whole thing.”