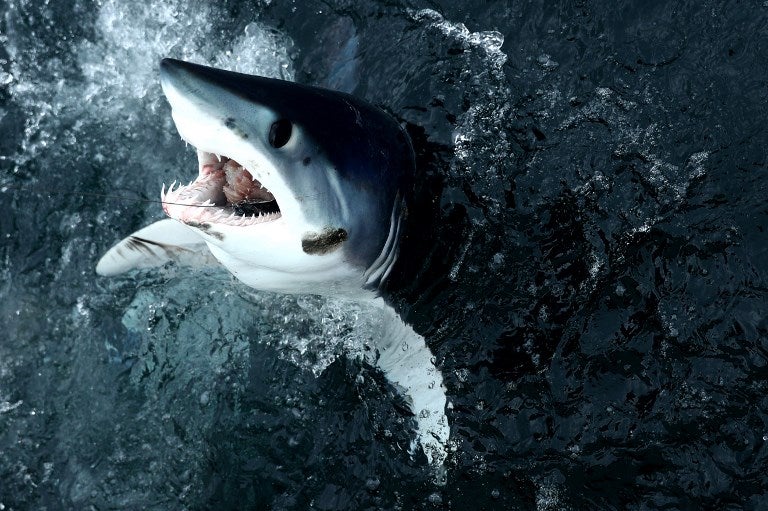 In this file photo taken on July 15, 2017, a shortfin mako shark emerges from the water after being caught by Eric Kelly on the Kalida during the 31st North Atlantic Monster Shark Tournament in New Bedford, Massachusetts. Some 17 species of stingrays and sharks out of the 58 most recently assessed are now classified as at risk of extinction, according to the International Union for the Conservation of Nature (IUCN), which published a more detailed and ‘troubling’ report than the previous ones. AFP

PARIS, France – Human appetites are pushing makos and other iconic sharks to the brink of extinction, scientists warned in a new assessment of the apex predator’s conservation status.

Seventeen of 58 species evaluated were classified as facing extinction, the Shark Specialist Group of the International Union for the Conservation (IUCN) said late Thursday in an update of the Red List of threatened animals and plants.

“Our results are alarming,” said Nicholas Dulvy, who chairs the grouping of 174 experts from 55 countries.

“The sharks that are especially slow-growing, sought-after and unprotected from overfishing tend to be the most threatened.”

That category includes the shortfin mako, whose cruising speed of 40 km/h (25 mph) — punctuated by bursts of more than 70 km/h — makes it the fastest of all sharks.

Along with its longfin cousin, the two makos are highly prized for their flesh and fins, considered a delicacy in Chinese and other Asian culinary traditions.

“Today, one of the biggest shark fisheries on the high seas is the mako,” Dulvy told AFP. “It is also one of the least protected.”

In May, nations will vote on a proposal by Mexico to list the shortfin mako on Appendix II of CITES, the Convention on International Trade in Endangered Species.

An Appendix II status would not ban fishing or trade, but would regulate it.

Six of the species reviewed were listed as “critically endangered,” three for the first time: the whitefin swellshark, the Argentine angel shark, and the smoothback angel shark.

Eleven others were classified as either “endangered” or “vulnerable” to extinction.

The IUCN’s shark group is conducting a two-year review of more than 400 species of sharks.

For sharks and other marine animals they use another approach, looking instead at how quickly populations decline.

But that requires a benchmark, especially for pelagic — or open ocean — species, Dulvy explained.

Only within the last 10 years have scientists been able to establish one, partly with the help of tuna fisheries that began to keep tallies of sharks by-catch.

“A decade on, we now know that the situation is way worse than we ever thought,” Dulvy said.

“In the Indian Ocean” — along coastlines in the Arabian Sea and the Bay of Bengal — “the tuna fishery is really a shark fishery with tuna by-catch,” Dulvy said.

In light of its new findings, the Shark Specialist Group is calling for “immediate national and international fishing limits, including complete bans on landing those species assessed as ‘endangered’ or ‘critically endangered’,” said Sonja Fordham, deputy chair of the group and an officer at The Ocean Foundation.

Sharks have lorded over the world’s oceans for some 400 million years, playing a critical role in global food chains.

The greeneye spurdog — newly classified as endangered — has a gestation period of nearly three years, the longest in the animal kingdom.

A 2013 peer-review study estimated that upward of 100 million sharks are fished every year to satisfy a market for their fins, meat, and liver oil.

More than half of shark species and their relatives are categorized as threatened or near-threatened with extinction. /cbb