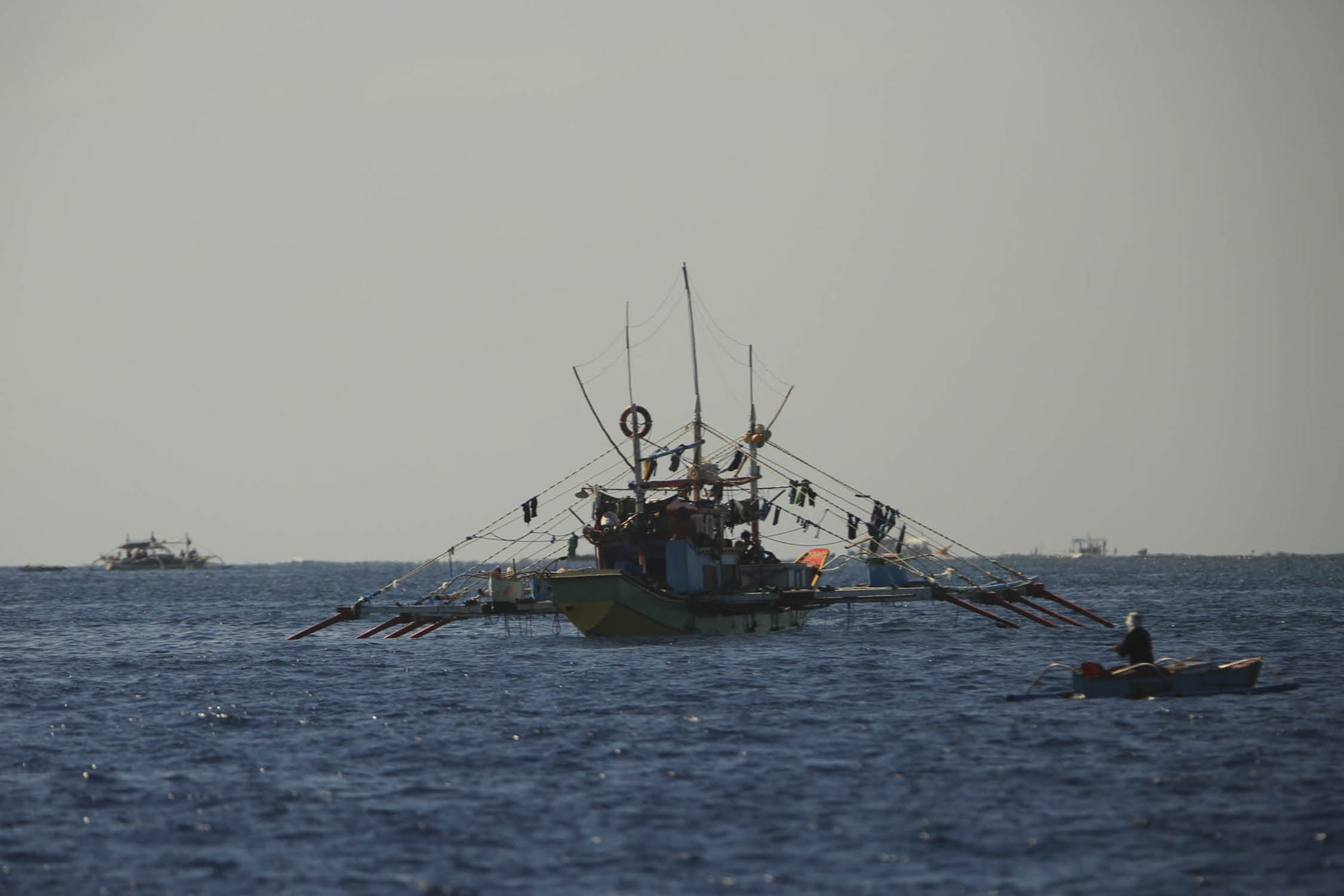 ALL AT SEA A fishing boat from Subic, Zambales province, casts its net near Panatag (Scarborough) Shoal in this photo taken in November 2016. Fishermen are worried the Chinese Coast Guard might stop them from sailing to the shoal on their next trip. —REM ZAMORA

Opposition senatorial candidates on Friday threw their support behind the unprecedented move by two former government officials accusing Chinese President Xi Jinping of crimes against humanity in the International Criminal Court (ICC) for what they said were Beijing’s transgressions in the South China Sea under his leadership.

Former Solicitor General Florin Hilbay described the action taken by former Foreign Secretary Albert del Rosario and former Ombudsman Conchita Carpio Morales as the Filipinos’ only recourse to “hold a hegemon accountable” when their own government would not.

“If this government will not defend us and our future generations from China’s occupation and destruction of our resources, we will,” the Otso Diretso candidate said in a statement.

“The move to hold a hegemon accountable using the rule of law manifests that ordinary Filipinos can defend our sovereignty, and that our people can come together to hold power into account,” Hilbay said.

The former solicitor general led the Philippine legal team that won Manila’s case against Beijing’s sweeping claims to the South China Sea in the Permanent Court of Arbitration in The Hague.

Del Rosario and Morales lodged their complaint on behalf of Filipinos and the hundreds of thousands of Filipino fishermen who were being “persecuted and injured” by China’s aggressive island-building and occupation of islands in the West Philippine Sea, part of the South China Sea within the country’s 370-kilometer exclusive economic zone.

“In implementing China’s systematic plan to take over the South China Sea, [Xi] and other Chinese officials have committed crimes within the jurisdiction of the court, which involve massive, near permanent and devastating environmental damage across nations,” they said.

Romulo Macalintal, an election lawyer in the Otso Diretso slate, lauded Del Rosario and Morales “for doing something that this administration has failed to do—stand up for our country and the Filipino people.”

Del Rosario and Morales filed the case on March 15, two days before the Philippines’ withdrawal from the ICC, which was ordered by President Duterte, took effect.

“This is a slap to the Philippine government who has failed to exact accountability and punish the countless transgressions of China against Filipino fishermen and the destruction of our marine environment,” the former Marine captain said.

Opposition Sen. Francis Pangilinan expressed the same sentiment and praised Del Rosario and Morales for taking a “momentous step in the right direction.”

“They took the cudgels for the aggrieved Filipinos, something that the administration should have done a long time ago, but chose to ignore, if not downplay,” he said in a statement.

Mr. Duterte told reporters on Thursday the complaint against the Chinese leader would not undermine ties between Manila and Beijing, which did not sign the Rome Statute that created the international court. 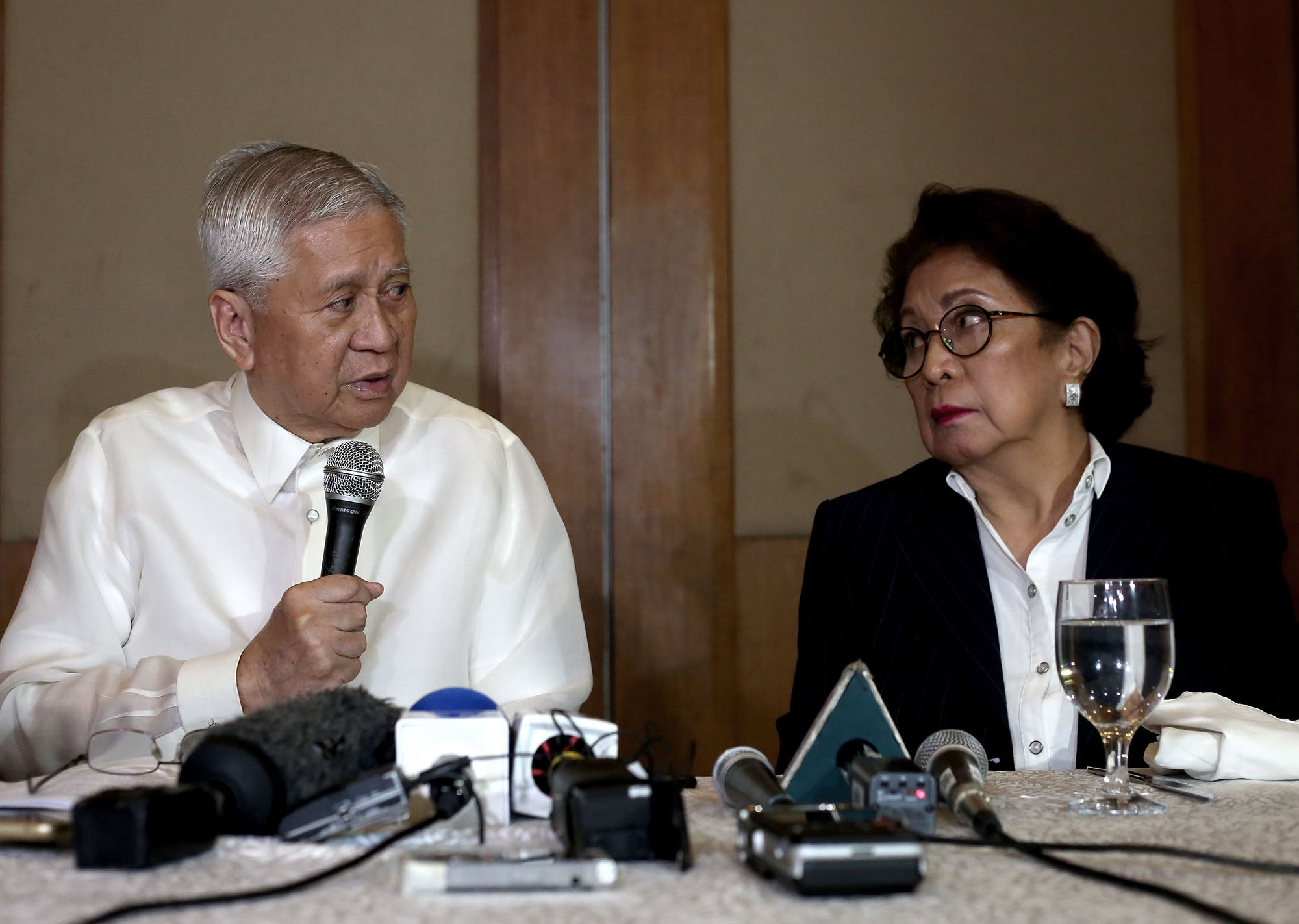 “They (Del Rosario and Morales) are entitled to file the case, and I will say there is no jurisdiction of this country and of China, even more so with China,” Duterte said.

At a press conference at the Manila Polo Club in Makati City on Friday, Morales and Del Rosario said they believed the tribunal had jurisdiction.

“What we’re talking about here is a crime within the territory of a state party,” said Morales, who had also served as Supreme Court associate justice.

Del Rosario said the case was a way of “trying to move forward the victory at the arbitral tribunal” in July 2016, which invalidated China’s expansive claims over the strategic waterway.

He said impunity reigned in the South China Sea because China continued to prevent Filipinos from fishing near the man-built islands.

“If we succeed in disciplining Mr. Xi, then the whole world will naturally follow us,” Del Rosario said.

Morales added that Filipinos were demanding accountability “from those who destroy [our] marine areas, that we want to check impunity as a deterrent for other countries to commit these crimes.”

University of the Philippines (UP) political science professor Clarita Carlos said China would likely “ignore” the complaint as it did the arbitral court ruling that invalidated its claims to virtually the entire South China Sea.

“That’s the rule in international law: The powerful will just do whatever they want to do. The powerless will be defined by the powerful. So what can you do?” Carlos said.

No impact on ties

Lawyer Jay Batongbacal, director of the UP Institute for Maritime Affairs and Law of the Sea, also saw the case as having no impact on Philippines-China ties because the Duterte government “clearly intends to dissociate itself from the action” of Del Rosario and Morales.

Although ties between the two countries have improved since Duterte took office, this did not appear to be reflected in the general sentiment of Filipinos toward China.

A recent Social Weather Stations (SWS) survey showed China was the least trusted among four countries close to the Philippines, including the United States, Japan and Australia.

The results of the Dec. 16-19 poll released late on Wednesday showed 31 percent had “much trust” in China while 39 percent had “little trust.”

The resulting net trust score (much trust minus little trust) of -7 was up from -16 in September. China’s net trust rating has been positive only in nine of 48 surveys from August 1994 to December 2018, SWS noted.

The United States was the most trusted with a +60 net trust rating.

Japan followed with +34, up from +28, and Australia with +31 down from +36 in June. —WITH REPORTS FROM MARLON RAMOS, JAYMEE T. GAMIL, JEROME ANING AND INQUIRER RESEARCH