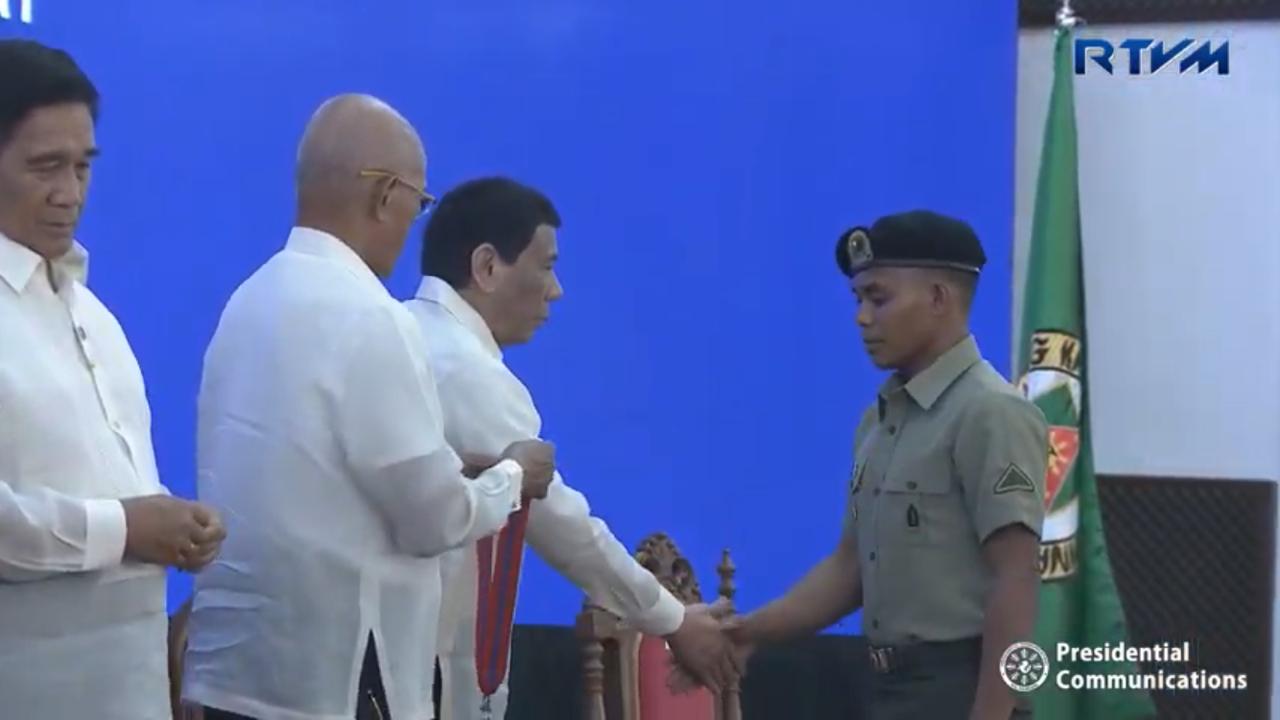 MANILA, Philippines — An entry-level soldier who battled an ISIS-linked group alongside troops during the Marawi siege in 2017 is one of three recipients of the second highest military medal for combat.

Private Jerry Wassig will be awarded with the Distinguished Conduct Star by President Rodrigo Duterte on the anniversary celebration of the Philippine Army on Thursday.

The soldier, who was nine months in service at that time, served as the tail scout of the 1st Platoon of the 11th Scout Ranger Company during an encounter with Maute group fighters in Marawi in September 2017.

“Imbued with profound sense of responsibility and dedication to duty, Private Wassig audaciously crawled inside a sewer upon seeing his commanding officer was fatally hit and his team leader’s condition was slowly deteriorating,” part of his citation read.

His commanding officer, Captain Rommel Sandoval, was killed in action while he was trying to save one of their comrades trapped in one of the buildings within the battle zone. For taking a bullet for his troops, he was later posthumously awarded with the Medal of Valor, the most coveted and highest military award for combat.

Despite the heavy gunfire exchanged between government troops and Maute fighters, Wassig “bravely crawled to the position to his comrades and performed the rescue of the two casualties.”

He was able to extricate his team leader first and later on his commanding officer “even as enemies continued to fire at his position.”

Two other enlisted personnel — Sergeant Arnel Alberto of the 1st Light Reaction Company and Corporal Roel Delos Reyes of the 66th Infantry Battalion — are also recipients of the Distinguished Conduct Star for their roles against Maute fighters in 2017 and 2016, respectively.

ADVERTISEMENT
Read Next
Owner of abandoned car with P6.8M ‘shabu’ traced to Angeles City
EDITORS' PICK
World-standard accounting: Unlocking your financial potential
Defend Your Health! Shop health essentials from home with Rose Pharmacy’s Online Sale
DTI: Restaurants’ dine-in capacity to further expand, LGUs encouraged to move curfew time
BAP: PH banks can withstand ABSCBN shutdown
Water remains our saving grace right now
Early to tell if PH has reached ‘peak’ of COVID-19 outbreak — WHO exec
MOST READ
Enchong Dee to Harry Roque for saying ‘move on’ from ABS-CBN shutdown: ‘You disgust me’
‘I am not my father,’ says daughter of lawmaker who voted to deny ABS-CBN franchise
Defensor: ‘No problem’ with daughter expressing support for ABS-CBN
US rejects nearly all Chinese claims in South China Sea
Don't miss out on the latest news and information.