Cops seize P190K worth of ‘shabu’ in Quezon City 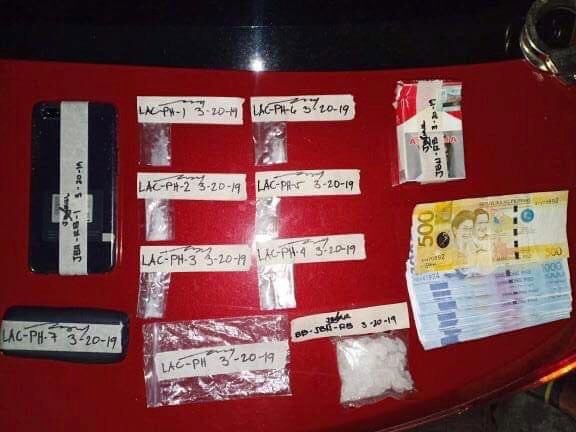 Suspected “shabu” worth around P190,400 and other pieces of evidence allegedly confiscated from Roberto Balda and his 15-year-old runner in a buy-bust operation in Quezon City on Wednesday, March 20, 2018. (Photo from Quezon City Police District)

Personnel from the Novaliches Police in coordination with the Talipapa Police launched a buy-bust operation against Roberto Balda, 46, and a 15-year-old boy around 5:30 p.m. at Tandang Sora Avenue corner Mindanao Avenue.

Police said Thursday that they recovered six small sachets and a medium-sized pack of suspected “shabu,” a pack of cigarettes, a Toyota Vios, P500 buy-bust money, and 44 pieces of P1,000 bill used as boodle money from the suspects.

The confiscated illegal drugs weigh around 28 grams, according to police.

Supt. Rossel Cejas, commander of the Novaliches Police, told INQUIRER.net that Balda has a dismissed case for possession of illegal drugs in 2011 and was arrested in 2018 for a separate and ongoing case for the same violation.

Cejas said that the suspect, who was allegedly using the minor as his runner for illegal drug activities, was temporarily freed for his case last year after posting bail.

Balda was brought to the Novaliches Police Station as he faces drug charges anew.

The minor, meanwhile, will be turned over to the Department of Social Welfare and Development after being brought to the city prosecutor for inquest, Cejas said. /je