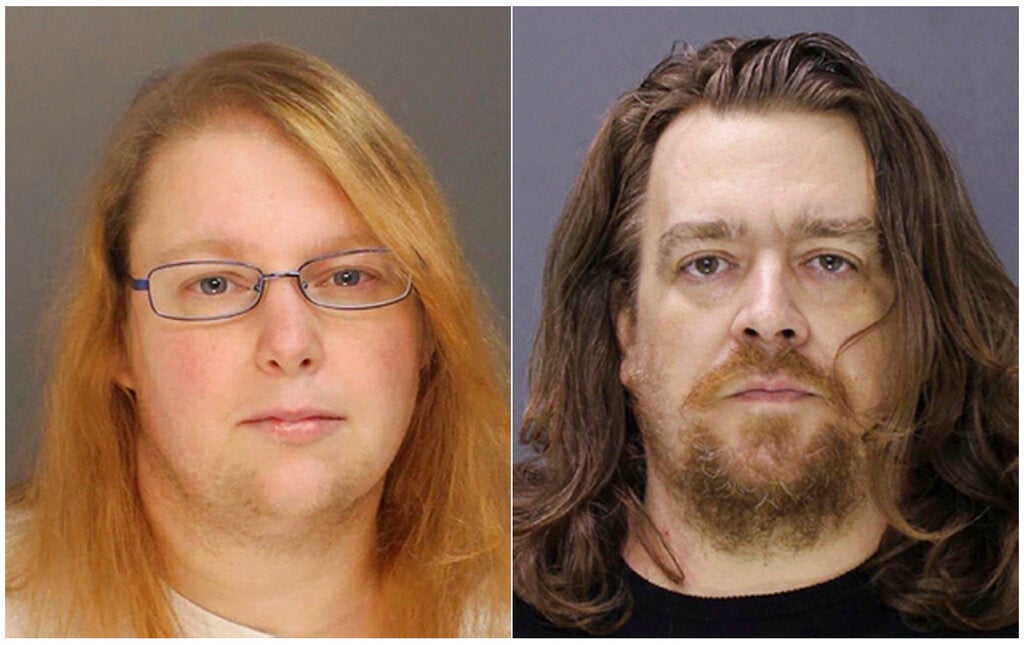 This combination of file photos provided on Sunday, Jan. 8, 2017, by the Bucks County District Attorney shows Sara Packer, left, and Jacob Sullivan. Sullivan pleaded guilty Tuesday, Feb. 19, 2019, to first-degree murder in the 2016 death of 14-year-old Grace Packer. Sullivan pleaded guilty to all charges in the 2016 death of Grace Packer. The penalty phase of his trial opens Friday, March 15, 2019 outside Philadelphia. A jury will hear testimony about Sullivan’s crimes before deciding on a sentence of either life in prison or death. AP FILE

DOYLESTOWN, Pennsylvania, United States — The mother of a girl who was raped, murdered and dismembered testified Wednesday that she helped plot the attack and carry it out, telling her daughter before her death that “I can’t help you anymore.”

Appearing to smirk at times, Sara Packer calmly recounted how she watched her boyfriend sexually assault her daughter, 14-year-old Grace Packer, then strangle her in a hot attic outside Philadelphia. She said Grace looked at her as she was being choked to death, and Sara Packer took her hand and told her it was “OK to go.”

“Grace had become, for lack of a better word, a non-entity,” Sara Packer said in a monotone. “She just didn’t exist anymore. I wanted her to go away.”

Sara Packer’s testimony came at a sentencing hearing for Jacob Sullivan, who pleaded guilty to rape, first-degree murder and other offenses in Grace’s death. Prosecutors are seeking the death penalty for Sullivan. The defense is seeking life in prison.

Sara Packer has agreed to plead guilty to first-degree murder in exchange for a life sentence.

On Wednesday, she told the jury that her daughter was a discipline problem — a “very difficult child” —and she wanted her dead. She admitted she hated Grace, shared a rape-murder fantasy with Sullivan, and helped hack up her daughter’s body and dispose of it months later.

Bucks County District Attorney Matthew Weintraub told the jury that he agreed to a life sentence for Sara Packer in exchange for her confession and guilty plea because the physical evidence against her was weak, because it was Sullivan who raped and killed Grace, and because her crimes did not qualify for the death penalty.

But Weintraub made it clear what he thought of Packer.

“Is it fair to say you are an utter and miserable failure at being a worthwhile human being?” he thundered at her.

Relatives testified about the impact of the killing early Wednesday.

“It sickens me to know that Grace was abused, tortured and literally thrown away like she was a piece of trash,” said her cousin, Karie Heisserer, with whom Grace lived for a time in 2015. “Grace is in a better place now, free from evil and pain.”

Jurors saw photos of the bubbly child in happier times: Sitting in the cab of her uncle’s big rig, frolicking in the sand at her first trip to the beach, delighting in birthday cake at a pool party. But all of that happened with relatives, not with Sara Packer, a former county adoptions supervisor who prosecutors say spent years physically and mentally abusing the little girl she fostered and then adopted.

Sara Packer testified that she and Sullivan tried to kill Grace with an overdose of over-the-counter medicine, thinking the pills and the heat of the attic would kill her. She also admitted helping bind her daughter with zip ties and stuffing a ball gag in her mouth.

The couple left her to die.

Grace eventually managed to escape some of her bindings and spit the gag out. But she was unable to make it out of the vacant house before Sullivan and Sara Packer returned overnight — some 12 hours later — and Sullivan strangled her.

Sara Packer and Sullivan stored Grace’s body in cat litter for months, then hacked it up and dumped it in a remote area where hunters found it in October 2016.

In a statement read by a detective, Grace’s younger brother, Josh Packer, now 14, said the only way he can bear his loss is if adults know her story and then act to prevent child abuse.

He said that if his big sister was told she could save other kids’ lives by giving her own, she would have asked, “What do I have to do?”

“Watch out for all the kids so that a loss like Grace’s loss never happens again,” Josh wrote. “Do your best to help kids who can’t help themselves.”

That’s not what happened in Grace’s case.

Sara Packer and her husband at the time, David Packer, adopted Grace and Josh in 2007. The couple cared for dozens of foster children before David Packer was sent to prison for sexually assaulting Grace and a 15-year-old foster daughter at their Allentown home, about an hour outside Philadelphia.

Sara Packer lost her job as a Northampton County adoptions supervisor in 2010 and was barred from taking in any more foster children. But child welfare authorities did not remove Grace from the home, despite evidence of abuse.

The Pennsylvania Department of Human Services launched an investigation after Grace’s murder but its findings have not been made public. /cbb

Read Next
2 suspects dead in Laguna buy-bust
EDITORS' PICK
51% of Filipinos think it’s dangerous to publish anything critical about Duterte admin — SWS
PhilHealth mess: Whose heads will roll? Roque says he can’t wait to name names
COVID-19 cases in PH overshoot 122,000 mark
Water remains our saving grace right now
Smart 5G goes live
The biggest lottery jackpot in the world is $158 million, and even someone from the Philippines could win it
MOST READ
‘Vexed’: Guanzon raps Topacio over Alzheimer’s remark
Captain astonished that his ship delivered Beirut explosive
COVID-19 cases in PH overshoot 122,000 mark
Locsin to China: Don’t overinterpret
Don't miss out on the latest news and information.