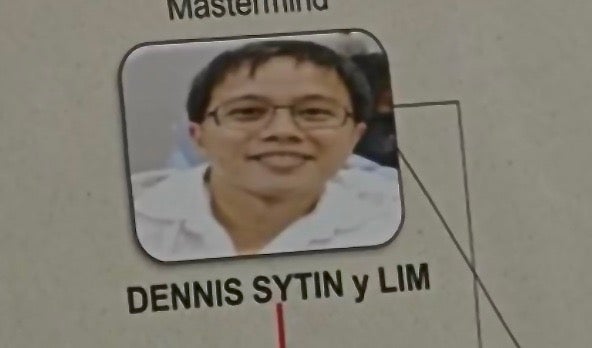 MANILA, Philippines–A panel of prosecutors created by the Department of Justice (DOJ) has already summoned Dennis Sytin to answer the murder and frustrated murder complaint filed against him and two others for the death of his brother, businessman Dominic Sytin.

Sytin, together with other respondents Edgardo Luib, and Oliver Fuentes alias Ryan Rementilla, are required to appear before the DOJ on April 1, and answer the complaint filed against them.

“You are hereby summoned…in connection with the preliminary investigation…and to submit your counter-affidavit and those of your witnesses and other supporting documents if any, in your defense,” read the subpoena issued Tuesday.

The panel of prosecutors led by Senior Assistant State Prosecutor Juan Pedro C. Navera warned that failure to comply with the subpoena “shall be considered as a waiver on your part to present your defense/s in this preliminary investigation and the case shall be considered submitted for resolution based on complainant’s evidence only.”

Aside from Navera, other members of the panel are Assistant State Prosecutor Weldell P. Bendoval and Assistant Prosecuting Attorney Gino Angelo P. Yanga.

The complaint against Dennis and the other corespondents was filed by Dominic’s wife Ann Marietta and the Olongapo City police.

Luib was arrested in Batangas in March 5. He executed an extrajudicial confession that identified Dennis as the mastermind and tagged Fuentes in the killing. Luib said he was promised P1 million to kill Dominic, but was paid only P50,000.

Dominic was shot and killed in front of the Lighthouse Hotel in Subic. His driver Efren Espartero was wounded when he tried to fight back.

Dennis denied the allegations, saying he is only being used as a scapegoat. /jpv