Tortoises packed to look like chocolates in smuggling attempt at airport

One man attempted to get tortoises past Customs in a Berlin airport by placing them in a pastry box.

The man, 69, tried to smuggle the tortoises at the Schönefield Airport on March 2 after arriving from a Cairo flight, according to Potsdam Main Customs Office via The Local, March 15.

The man thought he could skip Customs by failing to declare questionable goods. However, he was stopped by officers for an inspection. While going through his suitcase, they found a white pastry box that featured some odd-looking desserts. 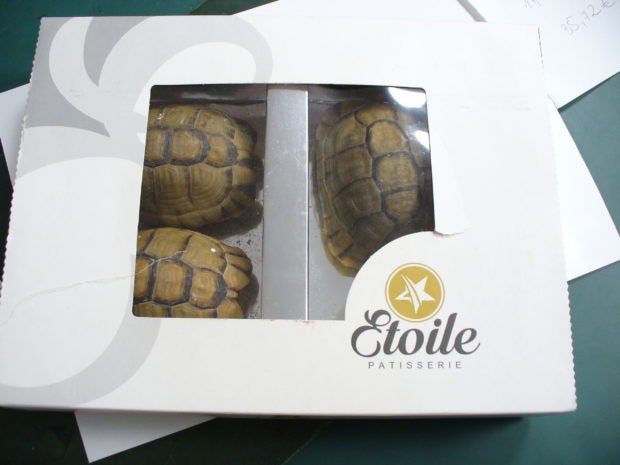 When asked what the package contained, the man claimed that the “desserts” were pieces of chocolate. Officers opened the box and found that inside were live Moroccan tortoises.

The tortoises were placed under the protection of the border veterinarian.

Tortoises are protected under the Convention on International Trade in Endangered Species of Wild Fauna and Flora. Violations are punishable with a fine of as much as €50,000 (over P2.9 million) and up to five years in prison.

The German Federal Agency for Nature Conservation is carrying out further investigations.

Earlier this month, over 1,500 live turtles were found inside four pieces of luggage at NAIA. Niña V. Guno/JB

Over 1,500 turtles found inside luggage at NAIA