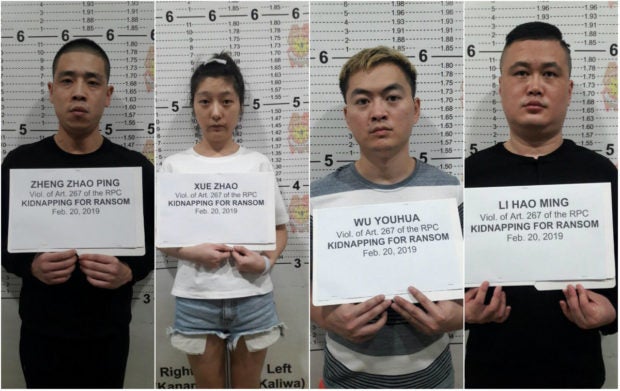 De Lima said this after an anti-crime watchdog, Movement for Restoration of Peace and Order (MRPO), expressed alarm over the rising number of kidnapping incidents allegedly perpetrated by loan shark syndicates.

The MRPO documented a total of 23 victims since 2018, the senator noted.

De Lima, who is detained in Camp Crame over drug charges, issued the call even as the police Anti-Kidnapping Group and the National Bureau of Investigation (NBI) have been rescuing Chinese kidnapped over gambling debt and arresting suspects.

Among the latest arrests made by the NBI on March 10 when it collared seven Chinese men who allegedly kidnapped a compatriot.

The MPRO has already recorded eight casino-related kidnappings from January to February this year, or an average of two victims a month, De Lima said.

She noted that the MRPO had pointed out that kidnapping groups would normally compel their victims to borrow money at casinos and later detain them while asking their relatives for money should they fail to pay their debts.

The senator urged that the manhunt against kidnapping groups should be intensified.

“What I find extremely alarming is the use of physical torture to victims to force them to release large amount of money or ask their relatives here or abroad to do so, in exchange for their freedom, as this can lead to death,” De Lima said.

Among the reported victims was Chinese national gambler Charlie Chua whose body was recovered from a creek in General Trias City after he went missing last Feb. 20.

De Lima reiterated the need for the government to re-examine and possibly revise laws regulating the operations of casino hotels and online gaming sites.

She earlier filed Senate Resolution (SR) No. 953 which seeks to probe the rise of casino resorts and online gambling.

“In SR 953, which I filed last year, I’ve mentioned that the country’s loose regulatory policies to monitor casino establishments make the Philippines more susceptible to other crimes and illegal activities that are not limited to kidnapping, including money laundering and fraud, among others,” she said. /cbb