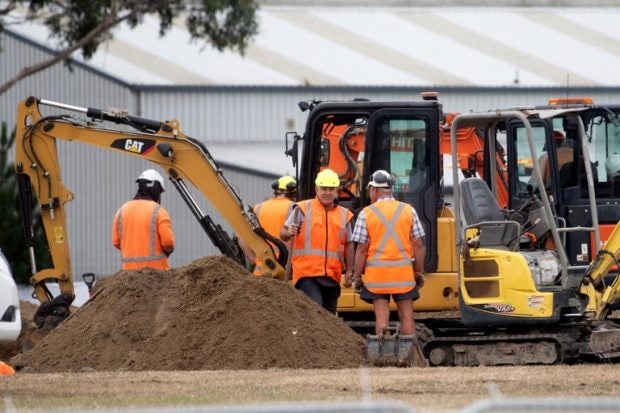 Workers dig grave sites at a cemetery in Christchurch on March 17, 2019 two days after a shooting incident at two mosques in the city. (Photo by Marty MELVILLE / AFP)

Islamic custom dictates that the deceased should be buried within 24 hours, but authorities said the complex investigation into the massacre of 50 worshippers during Friday prayers made a quick process difficult.

New Zealand officials said at least one body would be returned Sunday night, and that all 50 should be back with their families by Wednesday.

“It’s a massacre, what else do they need to know?,” Sheikh Amjad Ali, an assistant school principal who had travelled from Auckland to help with the funeral arrangements, told AFP about some frustrations with the wait.

“The families are sad but they are getting a bit frustrated. The reasons of their deaths are known … why not release those who have been identified,” he said.

“I’m not going to talk against authorities because they have their own rules and regulations, but they are balancing between the culture and religious views and the local laws.”

Ali said it was difficult for relatives to know that the bodies had been lying in the mosques for more than a day.

Prime Minister Jacinda Ardern said a “small number” of bodies would be returned to families from Sunday evening.

“It is the expectation that all bodies will be returned to families by Wednesday,” she told reporters, adding that six disaster recognition experts from Australia were helping out with the identification process.

Police Deputy Commissioner Wally Haumaha said the attacks were “totally unprecedented in our history” but that his officers were “working very hard” to support the families.

“Our sole focus is to get their loved ones back and to follow the cultural traditions such as the washing and shrouding of their loved ones, and we have made premises available to carry out these sensitive cultural issues,” he said.

Chief Coroner Judge Deborah Marshall added that every precaution needed to be taken to avoid any errors.

“There could be nothing worse than giving the wrong body to the wrong family,” she said.

At least two families had also requested that the bodies of their loved ones be repatriated to Pakistan, a  process that could take up to 10 days, he said.

“The Muslim tradition is that the body should be buried as early as possible. But this is not a normal circumstance,” he added.

Outside a meeting between authorities and victims’ relatives about the burial arrangements, a large group of Bangladeshis held up signs with the words “Please help us find Zakaria Bhuiyan” and “How long do we have to wait now?”

“They are not telling us anything,” Bhuiyan’s friend Kaniz Fatima told AFP, adding that the 30-year-old’s name was not on a preliminary list of victims given to families late Saturday.

He was believed in the Al Noor mosque near Hedley Park at the time of the shootings.

“We want some confirmation that he is dead, alive or in emergency. We have been waiting here for the last two days and some have not eaten or slept.

“We understand these procedures take time. But at least give us a time frame,” she pleaded.