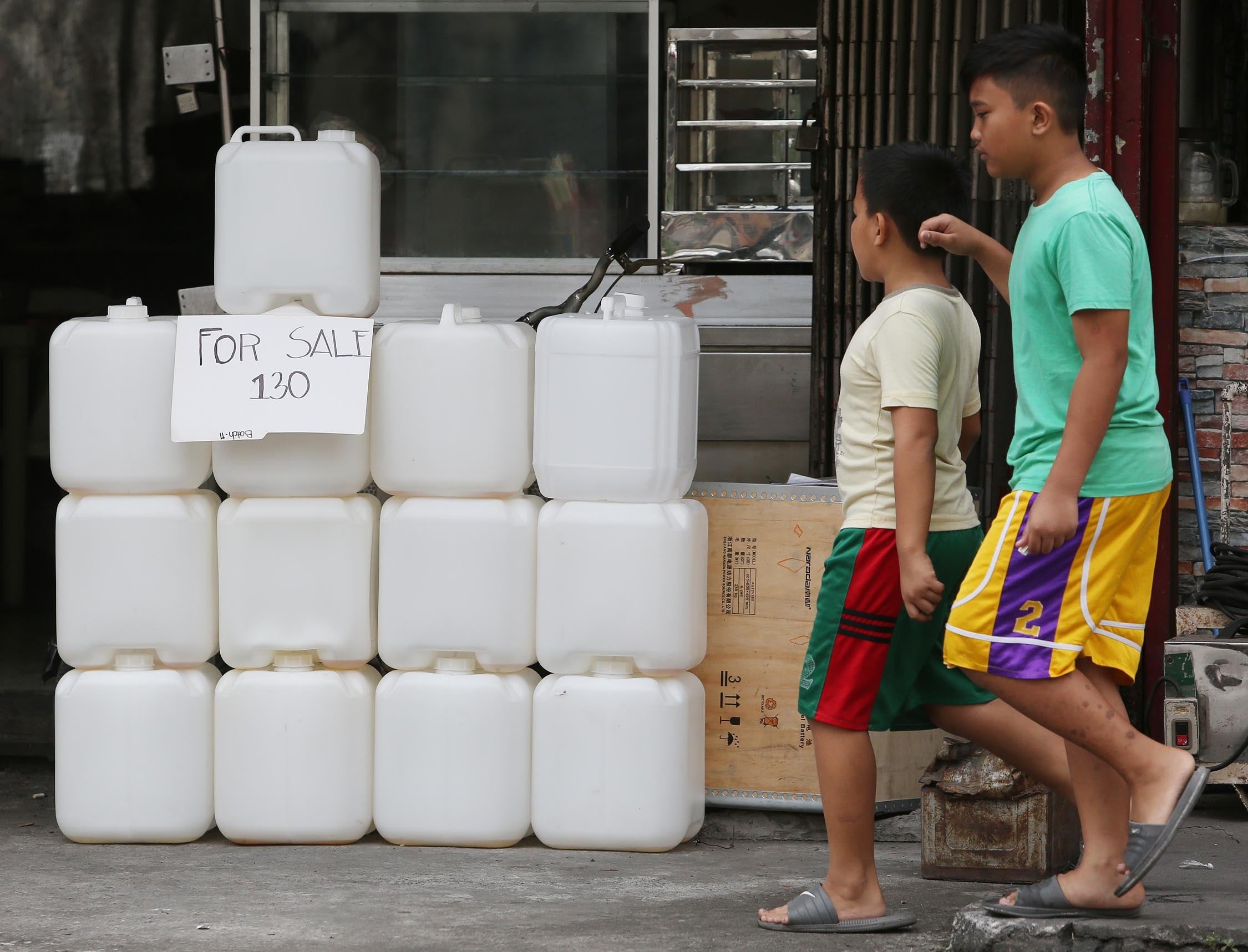 BY THE LITER The water shortage in some parts of Metro Manila and Rizal province provided a deep well of opportunity for enterprising minds, like the seller of these plastic containers on Bautista Street in Manila. —MARIANNE BERMUDEZ

At a barangay in Mandaluyong City that had almost nothing to drink or bathe with for days, a water refilling station could look like it was selling hope, not just purified water.

But Jerome, its 43-year-old manager, had to close the shop early in the afternoon on Friday.

With only rationed water to feed his business, he could process only a small number of the bottled water that he used to sell and his sales had gone down as a result.

“We closed because we still have to save some water for our deliveries. If we don’t close, the people here will line up outside,” he said.

Just last week, Jerome, not his real name, raised the price of 19 liters of bottled purified water from P35 to P40, an increase that he said compensated for his fuel costs.

Purified water is now not only used for drinking, but sometimes even for doing the laundry, bathing and dish washing — a luxury in the eyes of the poor.

Jerome said he had to buy water in nearby Makati City so he could sell some to the residents in his barangay.

The only other refilling station in the area closed earlier on Friday after raising its price since it, too, had to buy water elsewhere.

While the law might call this profiteering, this could be considered a compromise during a water crisis, an alternative to the yellowish water rationed by firetrucks.

Other nearby small businesses are suffering, too. A few blocks from the water station, a “carinderia” has started recycling water to clean dishes and cooking pans.

Its owner, Marivic Manalo, 57, said she used to let everyone, even noncustomers, drink a glass of water for free. Not anymore.

“The news said the water might run out next week. But it happened the next day. That’s why people panicked. No one expected it would be gone so soon,” said her 40-year-old son Benjie Manalo.

Meanwhile, a laundry shop run by an elderly couple still had a room with baskets full of unwashed clothes.

Oscar Barnuevo, 64, said last week was their first anniversary in the business, which ironically now is a laundry shop that couldn’t do the laundry.

Metro Manila’s water supply has been entrusted to two of the biggest conglomerates in the country — Ayala’s Manila Water Co. Inc. for the eastern district and Metro Pacific’s Maynilad Water Services Inc. for the western areas.

However, only Manila Water’s customers have to wait in long lines at certain hours of the day to get their water rations, while Maynilad’s had no problem getting water from their taps.

In a disclosure to the stock market last week, Manila Water said an “artificial demand surge” made customers draw more water at the same time after its initial advisories on low water pressure or total interruption of service in some of its concession areas were issued.

But while the poor hardly had any tap water to drink, the impact of the water shortage on the well-off patrons of certain branches of the Starbucks coffee chain in Greenhills, San Juan City, was minimal. The patrons had no fresh brewed coffee to sip. The case is the same for Coffee Bean and Tea Leaf (CBTL) customers.

These stores, Cruz said, were running on manual filtered water containers for their espresso machines. She said their operations were “still at a manageable state.”

“[We provide] continuous assistance to affected stores by providing filtered water which they can tap manually. Nearby stores have also been rationing ice to transfer to affected stores. Restrooms are closed until [the water] supply stabilizes,” she said.

The relatively more well-off parts of Metro Manila are affected too, but they do not have it as bad.

Kate, the manager of a 20-bedroom dormitory in San Juan, put out new rules, telling her bedspacers, among other things, to eat out.

“We will ration the water. No one will do laundry here. No one will eat here. Everyone eats out. Or if you should eat here, use plastic or Styrofoam utensils so that we won’t have to wash anything,” she said.

At Unimart supermarket in Greenhills, customers bought large numbers of bottled water and stacks of pails. Kate, too, had to buy pails at the supermarket. Customers wanting to use its restrooms found it had no water.

The chair of a major company, who did not want to be identified, said her family, too, had been storing water at her home in upscale Ayala Heights, Quezon City.

“We’re also luckier in that we have a condo in BGC (Bonifacio Global City) where we stay during the week,” she said, referring to the posh development in Taguig City.

While there are a number of theories behind the cause of the shortage, the water crisis that hit both rich and poor Filipinos laid out a situation where some saw an opportunity to push their preferred solutions.

Finance Secretary Carlos Dominguez III, for one, said the China-funded Kaliwa Dam would have made the crisis less of a threat had it been built earlier.

However, a crisis needs an immediate and effective response.

Jerome, who had been supplying his neighbors with purified water for the past 16 years, said he would be moving his business out of Mandaluyong later this month.

After all those years, it has not blossomed into a bigger business.

Instead, it remains a small shop, no bigger than the regular “sari-sari” store, but more vulnerable to crises like this.

Various authorities, including Manila Water spokesperson Jeric Sevilla, have said that one option is to wait for the rain.

Sevilla said last week that water supplies would be cut for at least six hours a day for more than a million households until the rainy season filled dams and reservoirs in May or June.

While some people may have more capacity to cope with the current crisis, the poor do not.

Nita Llera, who sells cigarettes and candies on the sidewalks of Greenhills, said a candidate for mayor brought a water truck to their community last week.

The 64-year-old grandmother, whose grandkids sell strands of sampaguita flowers in the streets, can’t wait for the rain.

“We can go without food as long as we have water,” she said.