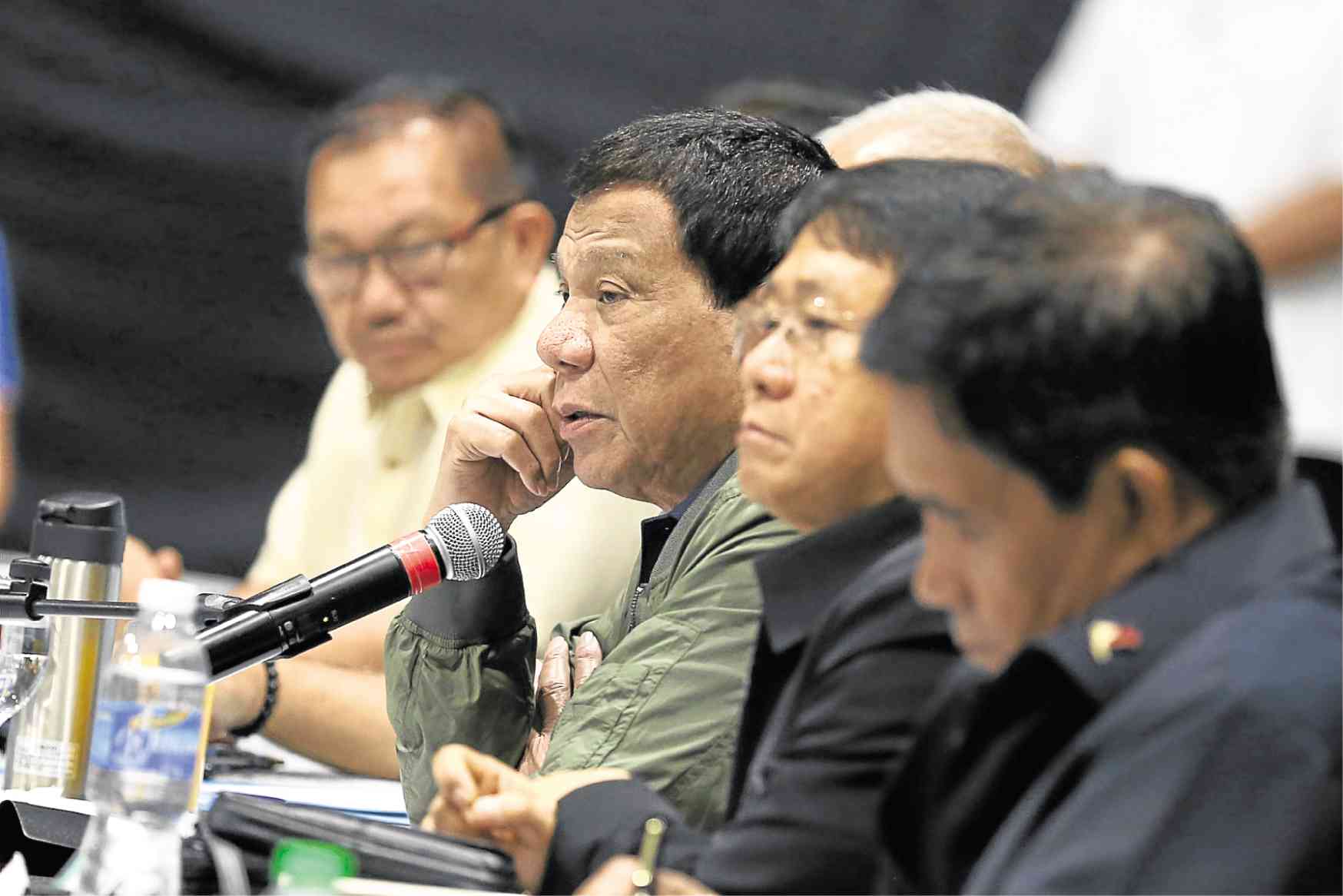 CRUCIAL ANNOUNCEMENT President Duterte presides over a joint command conference of the Armed Forces of the Philippines and the Philippine National Police on Thursday, where he announced the names of 46 politicians allegedly involved in the illegal drug trade. With him are Cabinet officials, including Agriculture Secretary Manny Piñol, Interior Secretary Eduardo Año and National Security Adviser Hermogenes Esperon. —MALACAÑANG PHOTO

President Duterte may have committed an impeachable offense when he released a list of 46 politicians suspected of links to the drug trade, an opposition congressman said on Friday, a day after the so-called narcolist came out.

Akbayan Rep. Tom Villarin said the President’s actions could constitute a culpable violation of the 1987 Constitution, one of the grounds for impeachment, “by infringing on an individual’s right to due process and presumption of innocence.”

“While the right to privacy is not absolute, there is no compelling reason for the state to violate it as we have a functioning court system where charges can be filed against these individuals,” Villarin said, adding that the list heralds an “open season for political assassinations,” as it could be used “to target political enemies of the administration … in the run-up to the midterm polls in May.”

The narcolist drew vehement denials from politicians, who described it as “politically motivated” and “propaganda” from their political rivals.

Magdalo Rep. Gary Alejano also saw a sinister motive behind Duterte’s release of the narcolist, saying that it was meant “to intimidate and control local politicians in the coming elections.”

It’s political harassment, but not the President’s fault, said Leyte Rep. Vicente Veloso, who is seeking a second term, and Pangasinan Rep. Jesus Celeste, whose brother, Bolinao Mayor Arnold Celeste, is running in his stead.

The two blamed the drug agencies for giving a false report to Duterte, with Veloso saying he planned to file criminal and graft charges against officials of the Philippine Drug Enforcement Agency, the Philippine National Police, and the Department of the Interior and Local Government (DILG).

Subic town Mayor Jefferson “Jay” Khonghun went on Facebook Live on Wednesday night to deny that he and his father, Zambales Rep. Jeffrey Khonghun, were in any way connected to illegal drugs.

“There’s no truth to it … It’s quite unfair,” the mayor said on a Facebook video uploaded a day before Duterte named 43 local officials and three lawmakers on the list.

“I fear for my life with my inclusion anew in the narcotics list of the President,” said Palencia, who was arrested after a raiding team allegedly found a grenade launcher in his house and piggery farm in Banga town in November 2016.  He was freed after posting bail.

“This is destroying our reputation,” Matinong said, adding that local politics was behind his inclusion in the list.

Reelectionist Mayor Cipriano Violago of San Rafael, Bulacan, said the list was “a product of wrong information” fed to Duterte by his political rivals. He had already been cleared by the PNP and the DILG, he added, referring to the 2016 narcolist.

Pangasinan Rep. Jesus Celeste also denied the drug links, but said he welcomed the administrative case filed by the DILG against him as it would allow him to defend himself in the right forum.

“If they have evidence, I will answer,” he said.

In Cagayan province, Lasam Mayor Marjorie Apil-Salazar sought police protection, saying her life had been endangered by her inclusion in the narcolist.

Salazar, who sought a meeting with the President to clarify her alleged drug links, was also included in the 2016 narcolist.

“I really don’t understand what’s going on,” said Mayor Cecilio Hernandez of Rodriguez, Rizal, who was not running in the May elections, but was fielding his son and vice mayor, Dennis, to take his place.

“I’d rather they charge us at the Ombudsman and finally (be able to) shed light on this (issue),” he said.

In Tarlac, Camiling Mayor Erlon Agustin said he was surprised at his inclusion in the list as he had already submitted documents for police validation.

Agustin urged authorities to “conduct a lifestyle check on (him) and open all (his) bank accounts,” saying he was “confident” he would be cleared of drug charges.

Several politicians sought a “police revalidation” of the list to clear their names. Among them were Raul Palino of Teresa, Rizal, and Lucena City Mayor Roderick Alcala, who strongly denied any involvement in the drug trade and said his inclusion was “politically motivated.”

But Mayor Eulalio Alilio of Lemery, Batangas, expressed disappointment at his inclusion, saying that though he was already “cleared” by the Batangas and regional PNP, this did not help his case.

Bay, Laguna, Mayor Bruno Ramos, 76, said he was bowing out of politics with “unfounded” controversies hounding him. “All (my) years of public service, destroyed in an instant,” he said.

In Maguindanao, Mayor Vicman Kambang Montawal of Datu Montawal town and his father, Vice Mayor Ohto Montawal, issued a statement over radio stations in Kidapawan City to deny the allegations against them and vowed to prove their accusers wrong.

In Zamboanga City, Mayor Jamar Abdulla Mansul of the Partido Demokratiko Pilipinas-Lakas ng Bayan, said he was no longer shocked to learn that his name was included in the narcolist.

“I have been tagged since 2013 by my political opponents … I and my family are innocent of these accusations,” Mansul told the Inquirer in a phone interview.

In Zamboanga del Sur, reelectionist Midsalip Mayor Leonida Angcap said she was shocked to hear that she was in the list as she had strongly supported the antidrug campaign of President Duterte.

Vice Mayor Ariel Alagos of Culasi town in Antique wondered why he was being subjected to such “injustice” and challenged his accusers “to file a criminal complaint if they have proof.”