Duterte order to get more water from Angat not doable–MWSS 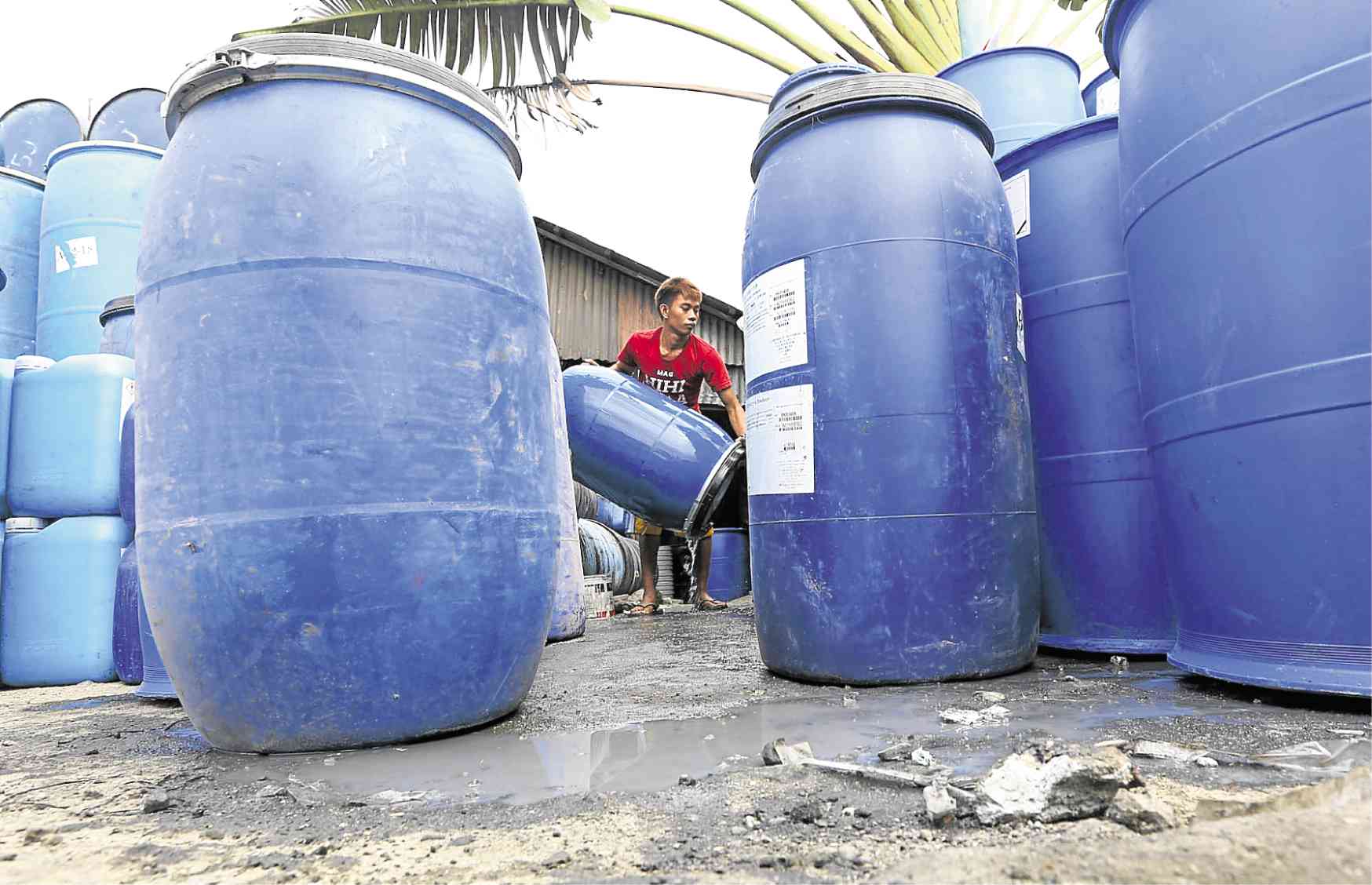 ROLL OUT THE BARRELS Buyers of these plastic containers sold by the roadside on Aguinaldo Highway in Bacoor, Cavite, have come from as far as Pasig City and other Metro Manila areas hit by the water shortage that has dragged on for more than a week. —MARIANNE BERMUDEZ

President Duterte on Friday ordered the release of more water from Angat Dam to alleviate the water crisis in Metro Manila, but officials of the Metropolitan Waterworks and Sewerage System (MWSS) said there was no way to do that at present although other water sources were being tapped to increase supply.

The President issued the directive amid a severe water shortage affecting about half of the population of the nation’s capital and nearby provinces within Manila Water Co. Inc.’s concession area in the east zone of the metropolis.

Long lines of people waiting for rationed water have been forming in affected communities while businesses and some hospitals struggled to cope after faucets started running dry last week.

Water supplies will be cut for at least six hours a day for more than a million households until the rainy season fills dams and reservoirs in May or June, a spokesperson for Manila Water, Jeric Sevilla, said on Thursday. The company on Friday said the shortage may not last through the summer because remedial measures were working.

“The President is directing the MWSS to demand from Manila Water Co. Inc., Maynilad Water Services Inc. and other responsible offices to release water from Angat Dam by noontime, March 15, good for 150 days, in order to supply the affected areas in Metro Manila and deliver, as well as distribute sufficient water to the residents thereof,” presidential spokesperson Salvador Panelo said.

Maynilad’s concession area in the west zone is currently not suffering from a similar water shortage.

“The President is aware and concerned of the sufferance of the residents of Metro Manila due to the present water crisis,” Panelo said.

He warned that Duterte “will personally” make responsible officers account for any failure to comply with the order.

Patrick Ty, the chief regulator of the MWSS, said there were no existing means to bring additional raw water from Angat to Manila Water’s treatment plant in Balara, Quezon City.

The MWSS’ concession agreements with the two water distributors allocate 1,600 million liters per day (MLD) of water from Angat in Bulacan province to Manila Water, and 2,400 MLD to Maynilad, he said.

“That is a total of 4,000 MLD, which is based on the actual amount that Angat can give with the existing infrastructure,” Ty said. 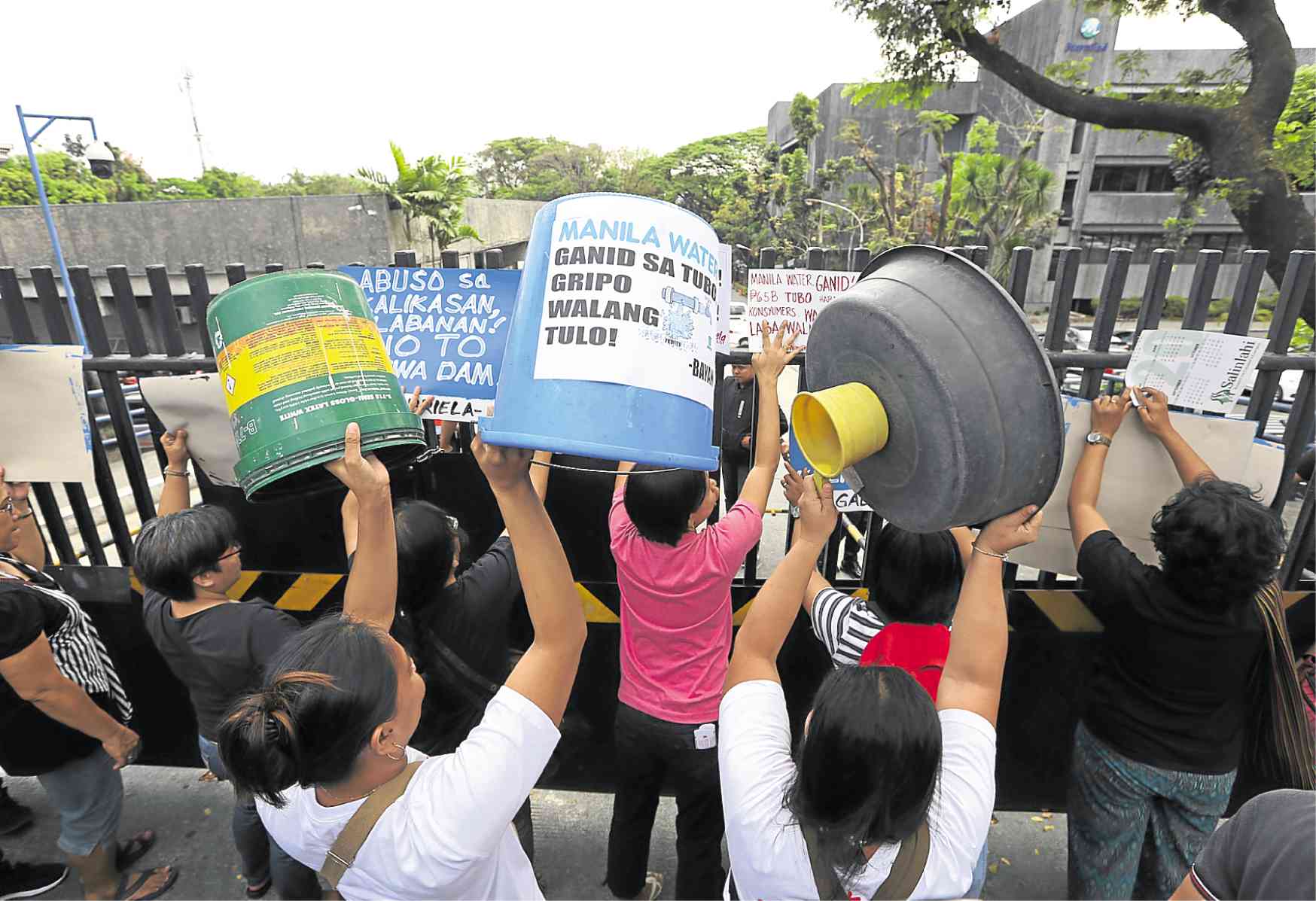 COME HELL OR NO WATER Members of different militant organizations raise upturned pails and basins to dramatize their protest against the unforeseen water shortage in the Metro this past week. The groups held a rally outside the Quezon City office of the Metropolitan Waterworks and Sewerage System on Friday. —NIÑO JESUS ORBETA

Water from Angat first goes through Ipo Dam—also in Bulacan—and passes through three tunnels into three catchment basins from where it flows through six aqueducts to the Novaliches portal, and delivered through two canals to Maynilad’s La Mesa treatment plants. A third conduit—also called a bypass—delivers Manila Water’s allocation.

All that infrastructure can only handle 4,000 MLD, according to officials of the MWSS, Manila Water and Maynilad.

Ty got entangled in a verbal tussle on Facebook with a certain Angel Salazar, who claimed to be a former MWSS employee and who said the water shortage could be solved by opening the bypass.

“For the record, the bypass is open,” he said. “If it is closed, Manila Water would not have water at all.”

There is relief to the supply problem, however, according to Presidential Communications Secretary Martin Andanar.

In addition to these, San Miguel Corp. is offering a “quick-response plan”—its untapped water allocation from Angat.

In a statement, San Miguel president Ramon Ang said its Bulacan Bulk Water Treatment Plant could deliver up to 140 million liters of clean, treated water to areas affected by the shortage, if this proposal were approved by the MWSS.

The plant could initially produce 200 MLD, but the water districts could only receive 60 MLD because their facilities have not been upgraded. The excess 140 MLD could serve the average daily water requirements of about 455,000 households, Ang said.

“As a quick response to the situation of customers of Manila Water, we will coordinate with the MWSS and local government units to secure permits to place water refilling stations in affected areas,” he said.

Moving that much water, however, will be logistically challenging. Water tankers capable of carrying 10 kiloliters may have to make 14,000 truck trips daily to bring water to the affected areas.

Manila Water, however, said in a statement later on Friday that its customers may no longer have to suffer water service interruptions, some lasting 20 hours, throughout the summer.

It said its rotational supply scheme was working as its reservoirs were filling up, although some areas would still experience low water pressures, but that was expected to improve in the coming days.

It said its Cardona facility was now delivering 22 MLD and was expected to produce up to 50 MLD by mid-April, when additional supply from several deep wells was expected. —WITH A REPORT FROM AP