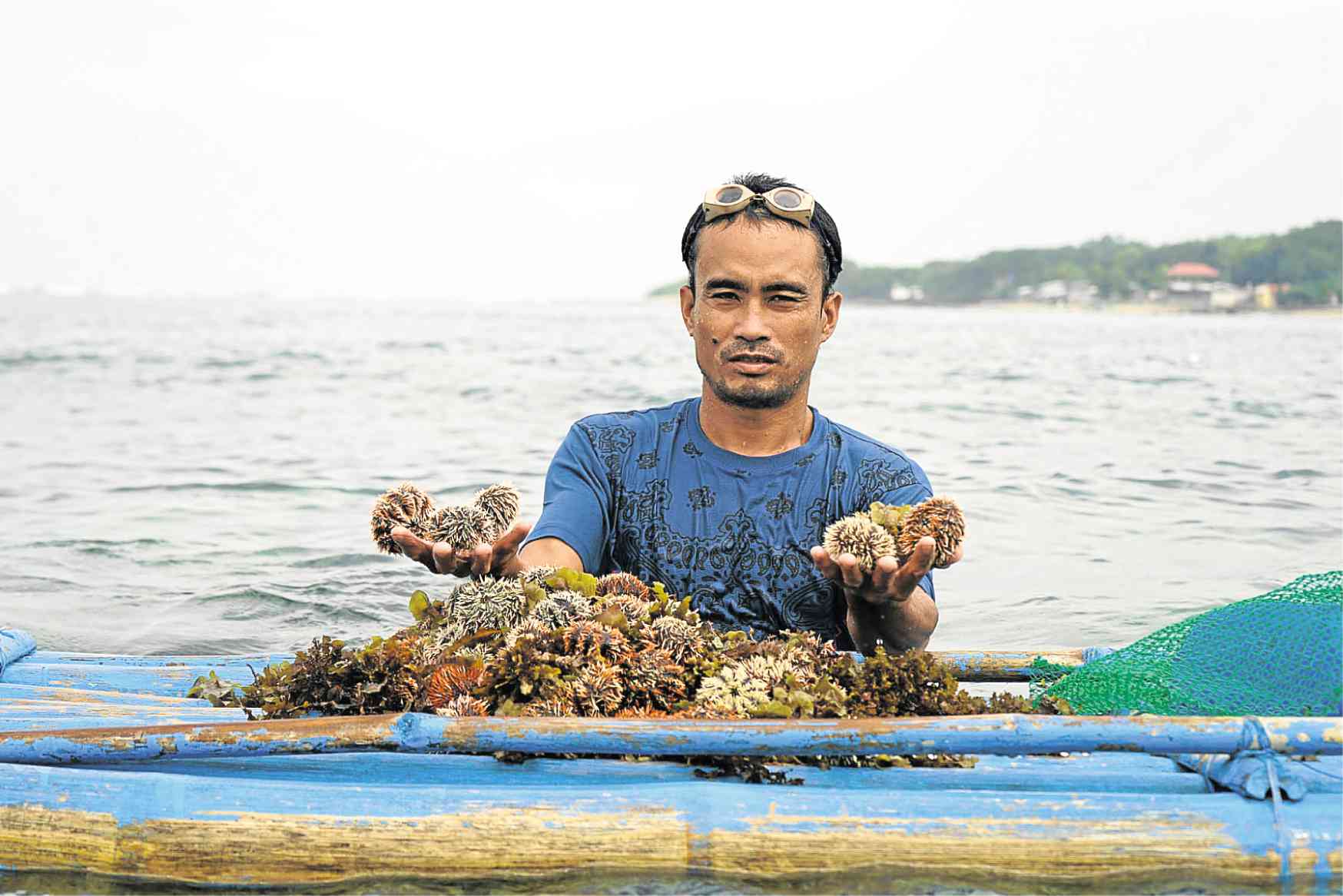 Prado, 40, said he had developed this “special bond” with sea urchins at a young age when their coastal waters were still teeming with urchins, which had become a prized Asian delicacy.

“There has been a huge demand for sea urchins over the years, but harvesting these from their natural habitat has led to lack of supply,” Prado told the Inquirer.

To address the scarcity of supply, the Bureau of Fisheries and Aquatic Resources (BFAR) regional office introduced farming urchins in cages in 2013.

Fishermen were trained on urchin and seaweed farming. They received initial stocks of juveniles and seaweed planting materials from the BFAR.

At least 45 fishermen were organized for the activities and given an area of 20 x 20 meters for seaweed growing and two cages for urchins.

Six years later, the Almeida Fisherfolk Organization has grown into 150 members, each with two cages for urchins and a 10 x 20 m plot (made of floating ropes) for growing seaweeds.

Eucheuma is sold by farmers to manufacturers of carrageenan, an ingredient for cosmetics, food processing and industrial manufacturing.

“We harvest eucheuma every 45 days. A foreigner comes to buy our produce,” Prado said, adding that they could barely match the rising demand for seaweeds.

He said they had expanded from cage farming to sea ranching, or culturing urchins right on the seabed, to meet the market demand.

“A kilo of adult urchins is usually made up of eight to 10 pieces,” Prado said.

Local fishermen said they took care of the sources of food for their stocks, never uprooted  the seaweeds that naturally grew on the coastal waters.

“We gather floating branches of seaweeds, so there will always be available food for the urchins,” Prado said.

The industry has been good to Prado, who is able to send his four children to school, with his eldest already in college.

He was also hired by Don Mariano Marcos Memorial State University (DMMMSU) as a casual employee. He is now doing a research on seaweeds near the DMMMSU campus in this town.

The DMMMSU assisted the members in the production of the soap made of seaweeds and papaya.