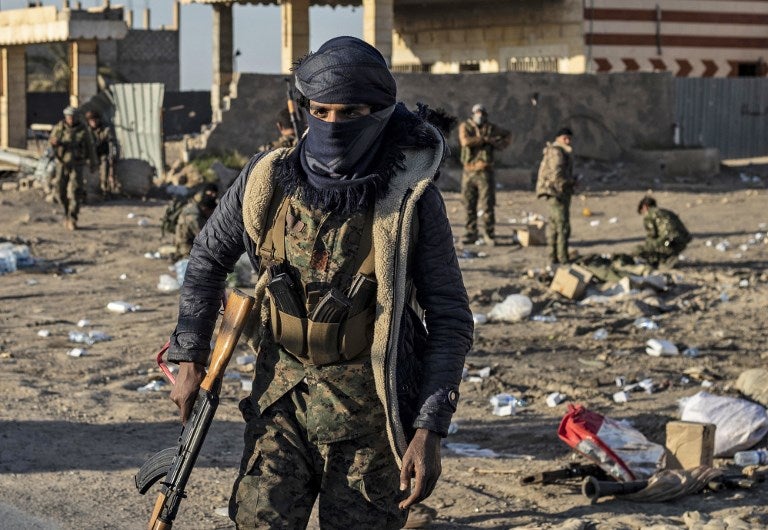 Fighters with the Syrian Democratic Forces (SDF) are pictured in the town of Baghouz, on the frontline of fighting to expel the Islamic State group from the area, in the eastern Syrian province of Deir Ezzor, on March 12, 2019. – US-backed forces said the Islamic State group was living its “final moments” after thunderous shelling on its last scrap of land in eastern Syria prompted 3,000 jihadists to surrender. But the die-hard IS fighters who stayed to defend the remnants of their “caliphate” struck back with a wave of suicide bombings, according to the Kurdish-led Syrian Democratic Forces. (Photo by Delil souleiman / AFP)

All that remains of a sprawling cross-border “caliphate” the jihadists declared in 2014 is a battered riverside camp in eastern Syria on the Iraqi border.

The US-backed Syrian Democratic Forces (SDF) have since Sunday rained fire on the enclave in a bend of the Euphrates River, blitzing thousands of IS members into surrender.

But hardliners still inside are putting up fierce resistance, hiding underground from air strikes by a US-led coalition, and unleashing suicide bombers on advancing forces.

A spokesman for the Kurdish units on the ground inside the village of Baghouz on Thursday said these tactics were preventing a speedy advance.

“There is progress but it is slow as the area is narrow,” said Jiaker Amed, a spokesman for the Kurdish People’s Protection Units (YPG) taking part in the fight.

“Those who stayed inside are mostly suicide bombers blowing themselves up, which is impeding the advance,” he said.

“They are using below-ground tactics,” hunkering low in tunnels and trenches, the spokesman said.

“That’s why the warplanes are not having the desired effect.”

The strikes and artillery fire have been most intense at night since Sunday, sending parts of the camp up in flames.

But Amed said the battle would now continue “day and night”.

Thousands of IS family members, as well as suspected fighters, have poured out of the shrinking pocket in Baghouz in recent weeks.

Since the offensive resumed on Sunday, 3,000 IS members have surrendered, SDF spokesman Mustefa Bali has said.

About 60,000 people have streamed out of IS-held territory since December, the Britain-based Syrian Observatory for Human Rights said, around a tenth of them suspected jihadists.

The exodus has sparked a humanitarian crisis in Kurdish-held camps for the displaced, where women and children have arrived exhausted after weeks of siege.

These include the wives and children of alleged foreign jihadists, hundreds of whom are being held by the Kurdish forces.

Save the Children said Thursday more than 3,500 foreign children from more than 30 countries were estimated to be living in camps in northeast Syria.

Of these, over 2,000 are aged less than five years old, the charity said.

The International Rescue Committee said 120 people – mainly young children – have died on their way to the Al-Hol camp, where most IS family members are ferried.

At the height of its rule, IS implemented its brutal interpretation of Islam on millions in territory the size of the United Kingdom across Syria and Iraq.

It churned out violent propaganda to attract foreign recruits. 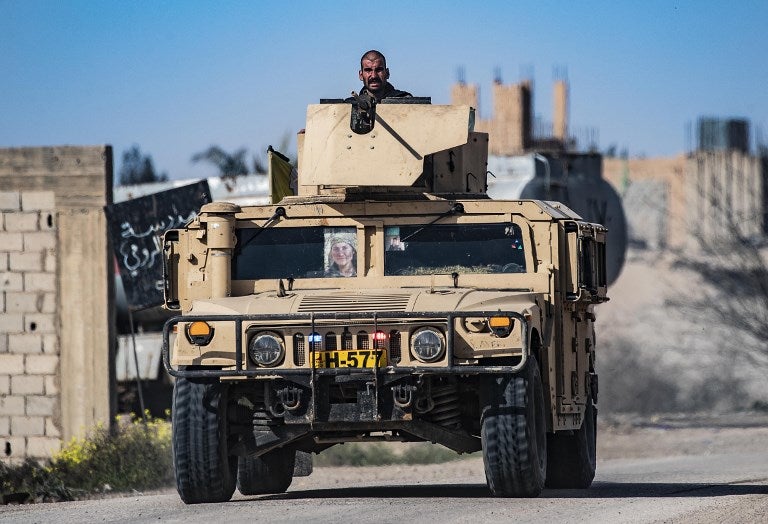 A fighter with the Syrian Democratic Forces (SDF) sits atop a US-made Humvee, decorated with a picture of a woman fighter, in the town of Baghouz, on the frontline of fighting to expel the Islamic State group from the area, in the eastern Syrian province of Deir Ezzor, on March 12, 2019. – US-backed forces said the Islamic State group was living its “final moments” after thunderous shelling on its last scrap of land in eastern Syria prompted 3,000 jihadists to surrender. But the die-hard IS fighters who stayed to defend the remnants of their “caliphate” struck back with a wave of suicide bombings, according to the Kurdish-led Syrian Democratic Forces. (Photo by Delil souleiman / AFP)

Syria’s Kurds have repeatedly called for foreign government to repatriate the IS suspects they hold, but they have mostly been reluctant.

Baghouz is the latest major front in Syria’s devastating conflict, which enters its ninth year this week.

Since starting with the brutal repression of protests against President Bashar al-Assad, civil war has killed more than 360,000 and displaced millions.

On Thursday, a conference opened in Brussels to help donors drum up $9 billion to help Syrians uprooted by the war.

The United Nations estimates that $5.5 billion (4.4 billion euros) is needed to help the approximately 5.6 million Syrians forced to flee their country to Turkey, Lebanon, Jordan, Iraq, and Egypt.

But European countries have warned the money must not prop up Assad.

As the conflict reaches its eighth anniversary, the president may have ensured his political survival, but his country is fragmented and cash-strapped.

Assad’s forces control almost two-thirds of the country, after victories against the rebels and jihadists since a Russian military intervention in 2015.

But the northwestern bastion of Idlib held by Syria’s former Al-Qaeda affiliate, as well as a large swathe of the oil-rich northeast controlled by the SDF, remain beyond his reach.

Russian air strikes killed 13 civilians in Idlib on Wednesday, according to the Observatory, which relies on a network of sources inside Syria for its information.

It said they were the first such raids on the region since a September buffer zone deal intended to protect it from a massive regime assault. /kga