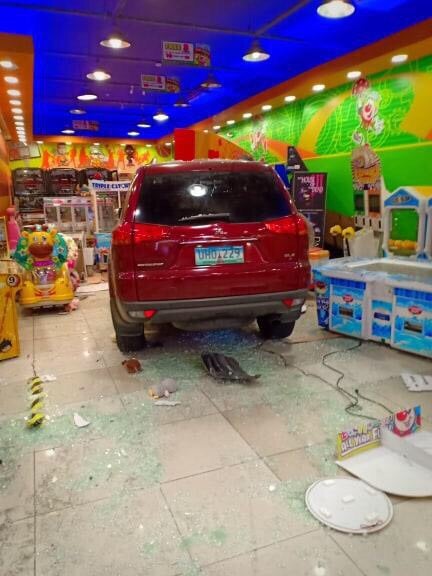 A sports utility vehicle (SUV) overshot and rammed an arcade or amusement center full of children, killing one person, in Carmona town in Cavite province. The driver has been charged with reckless imprudence resulting in homicide and damage to properties. Photo from Carmona PNP

SAN PEDRO CITY — Police filed charges against the driver of the sports utility vehicle (SUV) that rammed a supermarket’s amusement center, killing one person in Carmona town in Cavite province.

In a phone interview Thursday, Ramirez said Mamucod claimed parking his vehicle, a Mitsubishi Montero, at the parking lot of the Walter Mart supermarket around 1:30 p.m. Wednesday, when the SUV suddenly accelerated and overshot inside the establishment.

The vehicle hit a child’s amusement center where Sartiel happened to be along with other patrons, most of them children.

“The driver was there (inside the SUV), he had not gotten off yet. His claim was that the vehicle just suddenly accelerated but we are still investigating (what really happened),” Ramirez said.

Ramirez said the victims were discharged Thursday after receiving treatment in the hospital./lzb