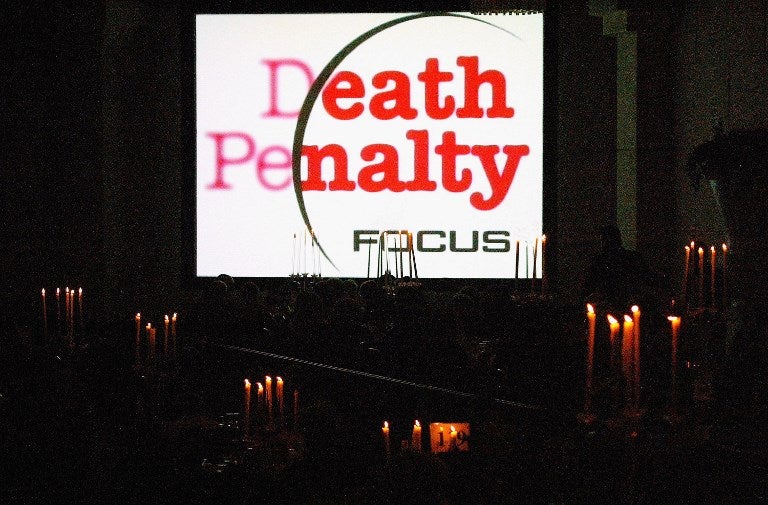 The interior of the Death Penalty Focus Awards is seen at the Beverly Hilton Hotel, on April 20, 2004, in Beverly Hills, California. The anti-death penalty awards highlight a growing national movement against capital punishment. AFP

LOS ANGELES, United States – Governor Gavin Newsom imposed a moratorium on carrying out the death penalty in California on Wednesday, granting a reprieve to 737 condemned inmates — the largest death row population in the United States.

“The death penalty has been an abject failure. It discriminates based on the color of your skin or how much money you make,” he told a news conference. “It’s ineffective, irreversible, and immoral.

“It goes against the very values that we stand for — which is why California is putting a stop to this failed system.”

Newsom, a Democrat who took office in January, has been a staunch opponent of the death penalty, last carried out in California in 2006.

In a tweet, President Donald Trump denounced the decision as a slap in the face for victims and their families.

“Defying voters, the Governor of California will halt all death penalty executions of 737 stone cold killers,” he said. “Friends and families of the always forgotten VICTIMS are not thrilled, and neither am I!”

Newsom said that as he spoke, the execution chamber at California’s San Quentin State Prison was being dismantled and stressed that his order — which stands as long as he is governor — does not mean that any inmates already on death row would be released.

“Those people are not going to be let out by this act, they will be held to account,” he said. “We don’t want to join Saudi Arabia… North Korea. We don’t want to be part of what is happening in Iran, in Iraq, China, Somalia, Pakistan and Egypt.

“Those are the countries — those last five — that join the US in executing more of their citizens than any other nations on Planet Earth.”

He said he hoped California and the United States as a whole would ultimately end the death penalty for good.

“Three out of four nations in the world do better, they have abolished the death penalty,” he said. “It’s time for California to join those ranks.”

Newsom, who appeared emotional during the news conference, said he had met relatives of victims in recent days and acknowledged they were divided on the issue.

“I met someone yesterday who said this is about eradicating evil, and you have a responsibility to eradicate evil by executing those on death row,” he said.

“I met a mother who said… ‘you have no right to take another life in the name of my daughter who was murdered.'”

A quarter of all those on death row in the United States are in California, according to the governor’s office. Twenty-five people on California’s death row have exhausted all of their appeals.

Among the most notorious inmates is Lonnie David Franklin Jr, also known as the “Grim Sleeper,” who was sentenced to death for 10 murders between 1985 and 2007.

Also on death row is Scott Peterson, who murdered his pregnant wife Laci Peterson and their unborn child in 2002. He was sentenced to death by lethal injection in 2005.

Human Rights Watch said that with the governor’s decision, California continues a trend in the United States away from putting people to death.

The state joins Colorado, Oregon, and Pennsylvania, which have similar bans, and 20 states that have abolished the death penalty, it said.

“Californians should be proud their state has taken a stand to end state-sanctioned killing and uphold the human rights of all people.”

The American Civil Liberties Union also welcomed the decision saying it was “a watershed moment in the fight for racial equity and equal justice for all.”

Although studies show that an increasing number of Californians favor a sentence of life without parole to the death penalty in most cases, voters in 2012 and 2016 rejected measures to repeal the death penalty. /cbb

Read Next
US grounds Boeing 737 MAX amid growing safety concerns
EDITORS' PICK
Climate Change Commission and Nestlé PH to discover sustainability-focused solutions
Isko Moreno bares ‘two-pronged’ approach to rehabilitate MSMEs
What’s at stake for every fighter at ONE: NextGen
Gordon calls 2 Pharmally execs ‘Senate fugitives’ after no-show in probe
Legarda emphasizes role of ICC/IPs in nation building this IP month
NCR’s COVID-9 alert level may be downgraded from 3 to 2 soon — DOH
MOST READ
LJ Reyes says Paolo Contis made ‘no efforts’ to talk to her after their split
Yang’s Princeton degree raises eyebrows among senators
Gordon calls 2 Pharmally execs ‘Senate fugitives’ after no-show in probe
Drivers with no traffic violations can now renew licenses for 10 years
Don't miss out on the latest news and information.