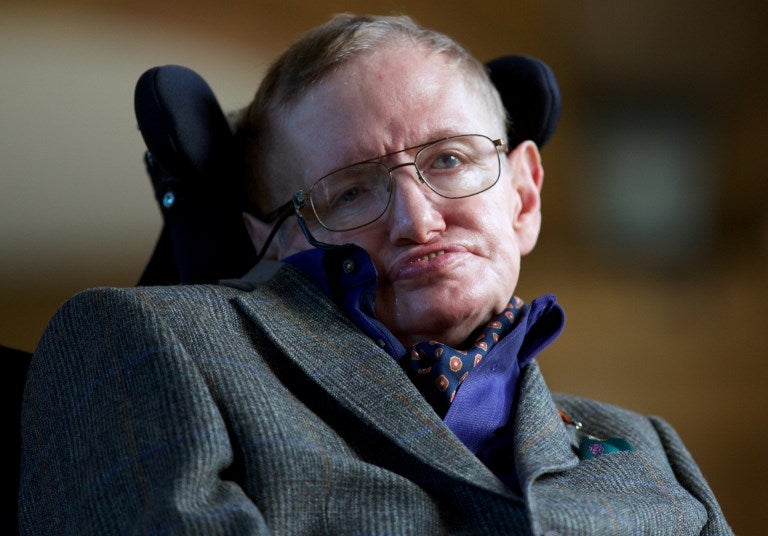 In this file photo taken on September 19, 2013, theoretical physicist Stephen Hawking poses for a picture ahead of a gala screening of the documentary “Hawking,” a film about the scientist’s life, at the opening night of the Cambridge Film Festival in Cambridge, eastern England. Renowned British physicist Stephen Hawking has died at age 76, a family spokesman said on March 14, 2018. / AFP PHOTO / ANDREW COWIE

LONDON – The nurse who cared for late British astrophysicist Stephen Hawking was on Tuesday banned for failing “to provide the standards of good, professional care that we expect and Professor Hawking deserved.”

Britain’s Nursing and Midwifery Council (NMC) made the ruling at a hearing where Patricia Dowdy, 61, faces multiple misconduct charges over her care of the professor – who died last year – including financial misconduct, not providing appropriate care, and not having the correct qualifications.

Hawking was confined to a wheelchair, almost completely paralyzed and unable to speak except through his trademark voice synthesizer after having been diagnosed with motor neuron disease at age 21.

“As the public rightly expects, in serious cases such as this – where a nurse has failed in their duty of care and has not been able to (provide) evidence to the panel that they have learned from their mistakes and be fit to practice – we will take action,” said the NMC’s Matthew McClelland.

“We have remained in close contact with the Hawking family throughout this case and I am grateful to them – as they approach the anniversary of Professor Hawking’s death — and others for sharing their concerns with us,” McClelland added.

Dowdy, who nursed the scientist for 15 years, had already been suspended after she was reported by Hawking’s family, according to the Mail on Sunday.

Hawking defied predictions that he would only live for a few years, although his rare condition – amyotrophic lateral sclerosis (ALS) – gradually robbed him of his mobility.

Despite his illness, Hawking became one of the world’s best-known and most inspiring scientists, known for his brilliance and his wit.

His work focused on bringing together relativity – the nature of space and time – and quantum theory – how the smallest particles behave – to explain the creation of the universe and how it is governed.

But he was also a global star – his 1988 book “A Brief History of Time” was an unlikely worldwide bestseller, and he appeared as himself in television shows from “The Simpsons” to “Star Trek: The Next Generation”.

The Royal Mint on Tuesday said he would be commemorated in a new 50 pence coin inspired by his pioneering work on black holes.

“It is a great privilege to be featured on a coin and I hope my father would be pleased to be alongside Sir Isaac Newton and Charles Darwin as scientists who have made it onto money!” said Hawking’s daughter, Lucy.

Nicola Howell, director of consumer at the Royal Mint, said: “We are very pleased to honor Stephen Hawking on his own coin.”

“As one of the world’s most brilliant physicists he was a great ambassador for science,” Howell also said. /kga