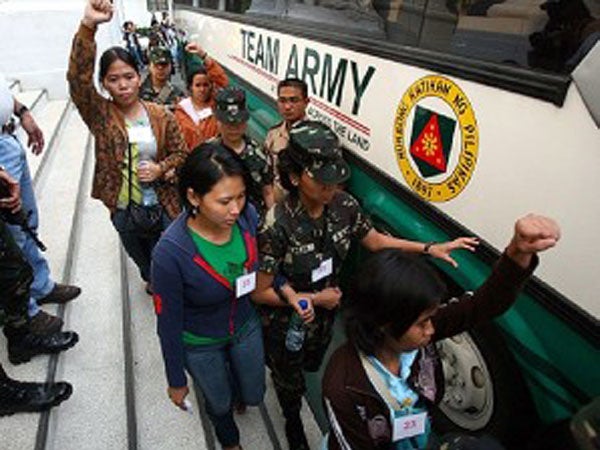 MANILA, Philippines — The camp of 43 health workers who were arrested and detained in Morong, Rizal, nine years ago “are disappointed and frustrated, even surprised” over the decision of the Sandiganbayan to allow the accused policemen and soldiers to contest charges against them.

A lawyer of so-called “Morong 43” lamented such ruling of the anti-graft court, but also believes “(t)here will be some form of justice over time.”

“As private counsels of the private complainants, we are disappointed and frustrated, even surprised, that the said motion was granted. We are certain we have the law (and) the evidence on our side,” said Edre Olalia, president of the National Union of Peoples’ Lawyers (NUPL), in a statement on Tuesday.

READ: Officials in arrest of ‘Morong 43’ allowed to contest charges

Olalia then warned that if this move of the court could ultimately mean acquittal for the involved police and military officials, it would propel views that impunity continues and human rights violators are rewarded under the administration.

“If this is a foreboding of an eventual acquittal of these military officials who said and acted as if they were the law that time, then this will again put a premium on impunity and reward human rights violators many of whom are back in the saddle of power or are salivating if not already savoring their retirement bonanzas,” Olalia noted.

“But to them and their handlers we say, not too fast, sirs. It ain’t over. There will be some form of justice over time,” he also said.

Charges against military and police officials stemmed from the alleged illegal arrest of 43 health workers – among them 26 women – who were reportedly conducting a medical training in a resort in Morong town on February 6, 2010.

The health workers were accused of being members or sympathizers of the New People’s Army, the armed wing of the Communist Party of the Philippines.

Morong 43 filed cases of robbery, torture, illegal detention, and human rights violations against military and police officials in May 2012 at the Department of Justice.

The prosecution said complainants were not able to choose their counsel because lawyers outside of Camp Capinpin in Tanay, Rizal were not allowed to enter the facility.

They also said most of the healthcare workers were “first time detainees”, and thus, “cannot be expected to readily have a counsel of choice.”

The officials are facing eight counts each for violating Section 4(a) (Penalty Clause) of Republic Act 7438.

“We are compelled to say also that this series of legal obstacles for the search of justice for the likes of Morong 43 may regrettably validate the public’s cynicism whether our courts are the best arenas for redress by the powerless especially at this present time (and) context,” Olalia said.

READ: What Went Before: The arrest of the ‘Morong 43’

“These are not only brazen violations of the very urgent & basic rights to counsel at a most crucial time under hostile circumstances but are also in utter contempt of time-honored and important Miranda rights but also international standards as enunciated in the [United Nations] Basic Principles on the Role of Lawyers,” he added. /kga

Read Next
Dope-dealing ring on messaging app busted in Israel
EDITORS' PICK
House energy committee chair Arroyo bats for cheap electricity
Why Tagle is a leading papal contender
A laptop that maximizes your WiFi so you can maximize your productivity
PH resumes talks with China on Chinese-funded transport projects
Powered by style, innovation and passion
In Borongan, nuns play hoops (not mahjong)
MOST READ
Why Tagle is a leading papal contender
Arjo Atayde reveals proposal to Maine Mendoza was ‘more than a year’ in the making
Zubiri on SRA mess: Shameful, disgusting
Iza Calzado asked self upon learning she’s pregnant at 40: ‘Is this what I want?’
Don't miss out on the latest news and information.