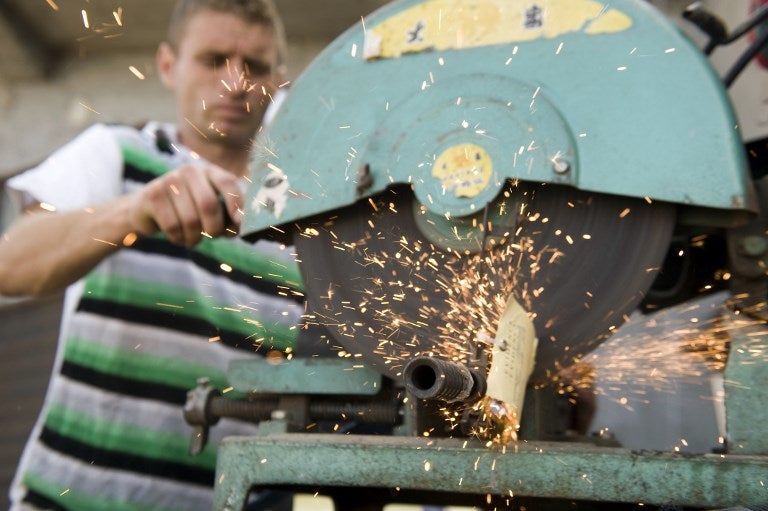 An employee of a metal foundry uses a circular saw. A Slovenian woman and her relative have been detained for allegedly cutting off her hand with a circular saw to get nearly 400,000 euros ($450,000) in insurance compensation, police said Monday, March 11, 2019. AFP FILE

LJUBLJANA, Slovenia – A Slovenian woman and her relative have been detained for allegedly cutting off her hand with a circular saw to get nearly 400,000 euros ($450,000) in insurance compensation, police said Monday.

The 21-year-old and her relative, 29, face up to eight years in prison on charges of attempted fraud.

“With one of her accomplices, she intentionally amputated her hand at the wrist with a circular saw, hoping to stage it as an accident,” police spokesman Valter Zrinski told a news conference.

The woman is thought to have staged the incident, together with three relatives, earlier this year shortly after the group signed life and injury insurance contracts with five different insurance companies.

All four were arrested initially, but two were released.

The woman was hoping to get around 380,000 euros of compensation and a life-long monthly payout of some 3,000 euros, police said.

The group intentionally left the hand behind rather than bringing it with them to the hospital, hoping to receive three times higher compensation for permanent disability, police said.

But authorities managed to pick up the hand in time, and doctors in a hospital in the capital Ljubljana managed to sew it back on, Zrinski said.

The average monthly net income in Slovenia is around 1,000 euros. /cbb