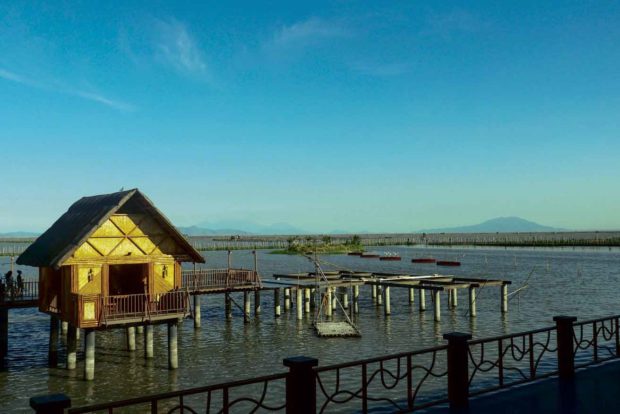 DRYING UP Water in Laguna Lake has dropped to slightly half a meter above the critical level, the Laguna Lake Development Authority reported on Monday. But the agency said it was continuing to drop in the absence of significant rainfall. —JOELMATARO/CONTRIBUTOR

Things will get worse before they get better, as the dry spell is expected to deepen across the country.

This early, the dry spell stemming from El Niño is already destroying crops, reducing water supplies and endangering the health of millions of Filipinos, according to officials.

Abnormally low rainfall in most parts of the country is expected this month, and dry spells and drought are due in the coming months until August, according to the Philippine Atmospheric, Geophysical and Astronomical Services Administration (Pagasa).

In Zamboanga City, a state of calamity has been declared amid the drastically reduced water levels in rivers and the Pasonanca watershed.

At Laoag City in Ilocos Norte province, farmers have started harvesting crops such as corn earlier than scheduled before these are laid to waste due to rising temperatures.

Some fishpond operators have also been harvesting tilapia to avoid fishkill.

Farmers have resorted to pumping water from the ground through shallow tube wells but acknowledge that the volume is not enough.

El Niño conditions are expected to last until May, according to Pagasa. The phenomenon is characterized by unusually warm sea surface temperatures in the central and eastern equatorial Pacific.

Pagasa has said weak El Niño conditions are prevailing over the country since February, warning the public of warmer-than-average surface temperatures and a prolonged dry season in the months to come.

In the March to August climate outlook presented on
Feb. 20, Pagasa climate monitoring and prediction section chief Ana Liza Solis said that this month, only southern Mindanao and Surigao del Sur were likely to experience “near normal” rainfall, with the rest of the country to experience below normal rainfall.

Solis said that this month, 22 provinces were likely to receive way below normal rainfall, 50 below normal, only eight near normal, and three above normal.

Crops in hundreds of hectares of land in at least 10 villages in the town of Kabacan, Cotabato, are suffering from the effects of high temperatures, according to its mayor, Herlo Guzman.

More than 500 hectares in these areas had become parched due to lack of rainfall since December last year, he said.

In Kidapawan City, Mayor Joseph A. Evangelista has ordered the City Disaster Risk Reduction and Management Office to intensify information and education campaign on grass fire.

Vast grasslands in the city have become dry due to intense temperatures, which also lowered the water level of Nuangan River.

In eastern Pangasinan, rice farmers expect a drop of up to 50 percent in their harvest due to lack of irrigation water and rainfall.

“The palay (unmilled rice) grains did not fully develop because of lack of water. Half of the grains we harvested are ‘ipa’ (empty),” Ponciano Onia said.

Despite the assurance from San Roque Dam officials, the provincial government continued to install tube wells.

The Ilocos Norte government will hold a water summit on March 15 to discuss mitigating measures during El Niño and mobilize immediate assistance for affected towns.

In Isabela, water in Magat Dam was still 10 meters above the 160-meter critical level in its catch basin on Sunday.

The dam supplies water to 85,000 ha of rice farms in Isabela, Quirino, Cagayan and Ifugao provinces, and provides water for power generation to the hydroelectric power plant.

On Sibuyan island, Romblon, the Cantingas River, which powers the island’s hydroelectric plant, has receded from its normal level of 2.4 meters to 1.70 meters, over the last two weeks of February.

In Bulacan province, the water level in Angat Dam remained high as of Monday at 200.55 meters. Its low critical level is 170 meters.

Angat Dam is a major source of potable water for Metro Manila.

In Albay, the Provincial Disaster Risk Reduction and Management Office is conducting an inventory of areas vulnerable to El Niño.

Che Rebeta, Albay provincial agriculture office chief, said a team of farm technicians was still validating report that the dry spell was starting to affect the towns of Oas and Polangui.

“Unlike Catanduanes and Masbate, the province [of Albay] would only experience moderate dry spell in the months of March and April and drought by May to June,” Rebeta said.