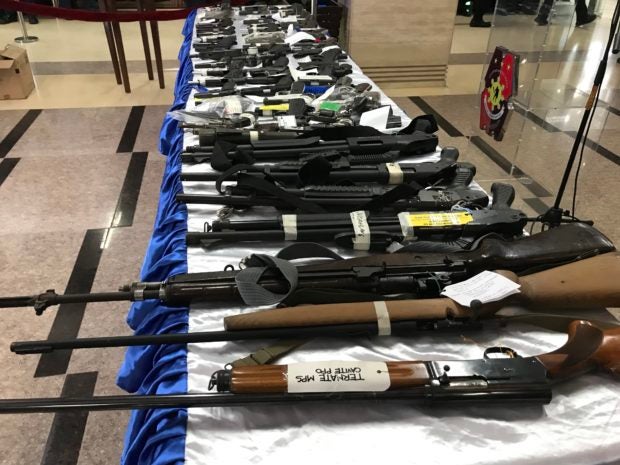 Firearms confiscated by the Calabarzon police in focused operations since February 27 to March 10 were presented to the media in Camp Crame on March 11, 2019. PHOTO by Cathrine Gonzales/INQUIRER.net

MANILA, Philippines — The Cavite Provincial Police Office confiscated 80 firearms in focused operations from February 27 until March 10 in preparation for the May elections.

The Cavite police said they arrested 292 persons, including 19 captured for illegal possession of firearms.

“These confiscated firearms represent our ongoing intensified campaign on the gun ban and the recovery of loose firearms to reduce the risk factors for the coming national, and local elections,” Philippine National Police chief Director General Oscar Albayalde said in a press briefing at Camp Crame on Monday.

Chief Supt. Edward Carranza, director of the Calabarzon police, said 28 of the confiscated firearms were seized through search warrants, while 52 were seized for having expired licenses.

“By taking away these instruments of violence from the hands of unauthorized individuals and criminal elements, we are taking proactive steps to mitigate the possibility of these firearms in criminal activity and election-related violence,” Albayalde said.

Meanwhile, the Calabarzon police have also arrested 202 suspects and killed one suspected drug personality in 92 operations against illegal drugs.

Of the arrested suspects, 169 are alleged drug pushers and 33 are alleged users. Police said 103.69 grams of “shabu” (crystal meth) worth P705,092 were also recovered in separate operations during the period. /ee