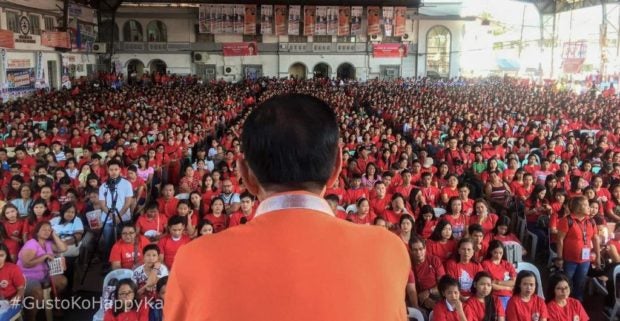 MANILA, Philippines – Former Senate President Juan Ponce Enrile, who is seeking a Senate comeback, wooed voters in Batangas over the weekend  and bared plans and programs to further spur economic growth in the province.

Enrile met with local leaders from the municipalities of Balayan, Lian and, Nasugbu on Sunday after a motorcade.

Enrile then visited the scenic towns of Lian and Nasugbu where he was welcomed by local residents and even tourists.

Enrile said he would push for the improvement of the Batangas port as he noted that the province needs a world-class port for commerce and tourism.

“We need to improve the Batangas port. It is the gateway of many world-class products being made in Batangas and also a destination and stopover of many tourist vessels,” Enrile said.

He also pointed out that Batangas is also the gateway of tourists who are en route to Mindoro, Boracay, and Romblon.

He noted that products like glycerine, as well as ballpens and art supplies from international brands, are made in Batangas and are shipped out of the country through the port.

Meanwhile, Enrile further called for the enhanced production of the province’s famous “Kapeng Barako” so that it can compete with those in the global market.

“With the demand for coffee continuing to soar all over the world, the Philippines must make its local brands, such as Kapeng Barako, better to compete with international brands. If we open up the local coffee industry to more investments, we can make our coffee truly world-class,” he said.

“Higher demand for our coffee will, in turn, create more jobs and more profits for Batangueños and other Filipinos,” he pointed out.

Enrile is seeking a return to the Senate under the Partido ng Masang Pilipino party. / gsg