ADDIS ABABA, Ethiopia  — The news shattered more than two years of relative calm in Africa’s skies. As millions on the continent headed to church on Sunday morning, an Ethiopian Airlines plane took off on a routine flight from Addis Ababa for Nairobi and quickly lost control. Six minutes later, all contact was lost. All 157 people aboard were killed, representing a staggering 35 countries. Here is a timeline of how the day unfolded. All times local.

Shortly afterward: The pilot issues a distress call and is told to return.

10:48 a.m.: The office of Ethiopia’s prime minister in a Twitter post gives first word of the crash, offering “deepest condolences to the families of those that have lost their loved ones on Ethiopian Airlines Boeing 737 on regular scheduled flight to Nairobi, Kenya this morning.”

11:15 a.m.: Ethiopian Airlines says it believes 149 passengers and eight crew members were on board the plane that crashed near Bishoftu, some 50 kilometers (31 miles) outside the capital.

1:35 p.m.: Ethiopia’s state broadcaster reports that all passengers are dead.

2:45 p.m.: Ethiopian Airlines publishes a photo of its CEO standing in a crater amid the wreckage. Little of the plane can be seen in the freshly churned earth.

3:30 p.m.: The Ethiopian Airlines CEO and Kenya’s transport minister say Canadians, Chinese, Americans and others are among the more than 30 nationalities of victims.

4:50 p.m.: The office of Ethiopia’s prime minister says he has visited the crash site, expressed his “profound sadness” and ordered a full investigation.

6:20 p.m.: As sunset approaches at the site, searchers and a bulldozer continue to pick through the scattered remains of the plane. The bulldozer digs for deeply embedded debris.

6:40 p.m.: Ethiopian Airlines says Ethiopian authorities, plane manufacturer Boeing and other international stakeholders will collaborate on an investigation into the cause of the crash.

8:25 p.m.: Ethiopia’s House of People’s Representatives declares Monday a national day of mourning for all victims. 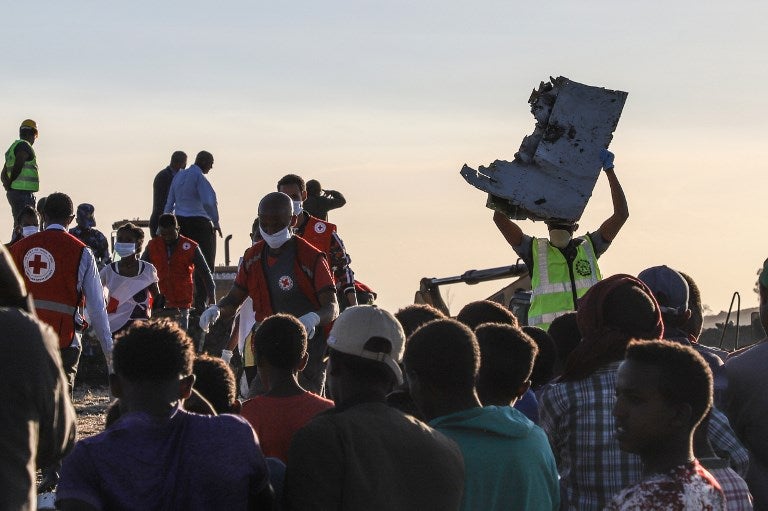 A man carries a piece of debris on his head at the crash site of a Nairobi-bound Ethiopian Airlines flight near Bishoftu, a town some 60 kilometres southeast of Addis Ababa, Ethiopia, on March 10, 2019. – A Nairobi-bound Ethiopian Airlines Boeing crashed minutes after takeoff from Addis Ababa on March 10, killing all eight crew and 149 passengers on board, including tourists, business travellers, and “at least a dozen” UN staff. (Photo by Michael TEWELDE / AFP)