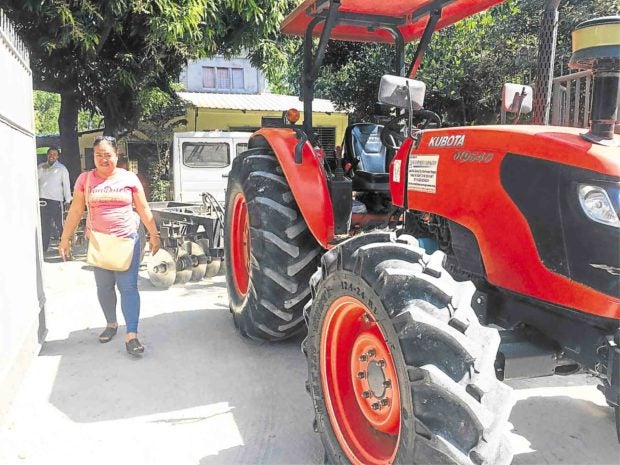 WHOSE PROPERTY? This tractor, thought to be missing, is in the control of a barangay chairwoman who allegedly dispatches the equipment to supporters of Bacolor Mayor Jomar Hizon. TONETTE T. OREJAS

BACOLOR, Pampanga — Farm equipment owned by the local government have been in the custody of a barangay chairwoman, preventing many farmers from using these to grow rice in the town buried by lahar discharged by Mt. Pinatubo in 1991, according to a directive from the Commission on Audit (COA).

The COA said the equipment should be transferred to the municipal agrarian office (MAO), but Eva Pineda, chief of Barangay Cabetican, confirmed that she continued to keep and manage the use of a tractor and a harvester on the advice of Mayor Jomar Hizon in November 2017.

Pineda said she was tasked with scheduling the use of the machines, although the COA questioned her right to keep the machines as she is a “person not related to the municipality.”

Pineda was not an employee of the local government, before she was elected barangay chair in May 2018. But she insisted she was a farmer.

Only a few farmers get to use the equipment, according to Ferdinand Pineda, chair of the municipal agricultural and fishery council. He is not related to the village chief.

Hizon, a gubernatorial candidate, said he entrusted the equipment to Eva Pineda to relieve the MAO of additional work. He said he did not remember receiving a copy of the COA audit. “I don’t discriminate,” he added.

The four-wheel drive tractor costs P2.495 million while the harvester with a heavy-duty transport trailer was worth P1.995 million.

These machines were bought by the Department of Agriculture in 2016.

The COA said the local government shouldered the costs of repairs thrice because it had not required the contractor to set aside a 10-percent warranty fund, in violation of the procurement law.

The warranty fund was also not collected after the town bought a P1.49-million rescue vehicle and a P1.414-million hydraulic machine.

To quell reports these machines were missing, the tractor was driven to Eva Pineda’s house when the Inquirer interviewed her on March 1.

The Inquirer was brought to the farm of Enrique Miranda, the driver of the equipment, in Barangay Cabalantian where the harvester was parked.

“We need the equipment because Bacolor farmers have planted 1,000 hectares with palay,” Ferdinand Pineda said.

“Also, equipment rental is high. For every 100 sacks of harvested palay, we pay nine sacks,” he added.

Lahar, or volcanic sediments, that settled on Mt. Pinatubo’s slopes after its eruptions flow from the Pasig-Potrero River during rainy months.

The 1995 lahar flow buried all of the town’s 21 villages, causing 50,000 families to flee to six resettlement sites.

According to the COA audit, Eva Pineda had been collecting P1,200 for fuel.

The village chair denied this, saying farmers pay a cavan for every 15 sacks of harvested palay. The proceeds were used to pay for fuel and salaries of a laborer and a driver.

She said nothing was set aside for maintenance. She showed receipts for repairs and fuel under the name of Miranda, who was not a municipal employee.

The COA said maintenance and repairs of the equipment were “charged against municipal funds,” including fuel expenses. This was confirmed by Hizon.

Honorio Pineda, MAO chief, said he did not take custody of the equipment as COA recommended. “It is at the discretion of the mayor. It is a mayor-managed program,” he said.